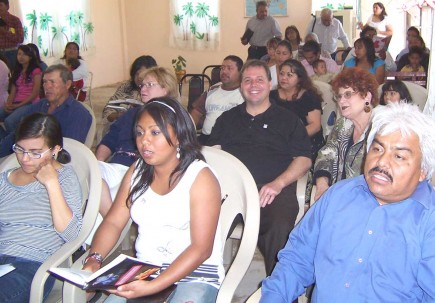 Erik Tryggestad
When asked to describe her recent trip to Torreon, Mexico, Cheri Reese said, “We have never felt so welcome.”
That’s despite facing men with machine guns — twice.
Reese and four other members of the Aiken church, just east of Augusta, Ga., traveled to Torreon, about 300 miles south of Eagle Pass, Texas, to work with the El Cambio and El Sacrificio congregations.
During an evening worship service in Mexico a man asked to be baptized. Soon after performing the baptism in a nearby pond, mission team members found themselves surrounded by police.
“We explained what was going on, and the chief came forward and shook my hand,” team member Dave Hill told the Aiken Standard. “Somebody had called and told them someone was being drowned.”
A second encounter was more ominous.
After the mission, as they began the trek back toward Eagle Pass at 5 a.m. on a Monday, another police officer passed them and blocked the road. More than 20 masked men and women emerged from the darkness and forced the team from their vehicles at gunpoint.
“Our Mexican preacher … took the brunt of the investigation,” minister Brian McCutchen told The Christian Chronicle. “They called him a liar, said we were drug dealers, searched our vehicles … and said they were watching us the entire time we were there.”
“These were not police,” he added. “After nearly an hour, we were let go.”
As they offered prayers of thanks for their safe return, the South Carolina church members “came back with mixed feelings,” the minister said.
They continue to pray for their fellow Christians in Torreon, a metropolitan area of nearly 2 million souls.
The city suffers from the same wave of violence that has claimed hundreds of lives in cities on the U.S.-Mexico border as police and military clash with drug cartels. In some cases, the cartels have recruited the forces trained to eliminate them, according to news reports.
About a month before the Aiken team’s mission, church members from across Mexico gathered in Torreon for the 22nd preachers’ seminar.
“There were rumors of kidnappings and stray bullets, but our lives were spared,” said coordinator Luiz Seckler of Harvest Ministries, sponsored by the University church in Abilene, Texas. Seckler and fellow Texas ministers Chris Frizzell and Karl Jones conducted the seminar.
“Mission work always has been risky business,” Seckler said. “When Peter was released from prison, the church prayed that he be bolder and that he deliver the message without fear. Before I go to Mexico, I ask the brethren to pray for that same boldness, that we trust God to see us through.”
Representatives of the Woodward Park church in Fresno, Calif., and Sunset International Bible Institute in Lubbock, Texas, traveled just south of the California border recently to Mexicali, about 120 miles east of Tijuana.
The group joined Mexicali church members and dedicated the Latin American Bible Institute, a facility designed to train future ministers, teachers and church leaders. Attendees told the Chronicle that they experienced no problems during the dedication.
Liberato Ovalle, a longtime ministry trainer, will serve as dean of the school, which plans to begin offering classes to at least 10 students in August. School officials seek additional funds to provide scholarships to students.
The recent border violence emphasizes the need for ministry training and evangelism in Mexico, said Gary Villamor, a member of the Woodward Park church who took part in the dedication ceremony. He cited Jesus’ promise of peace in John 14:27.
“We should be saying to government on both sides of the border, ‘The way to peace is to follow Jesus,’” Villamor said.
FOR MORE INFORMATION, see www.labionline.com.