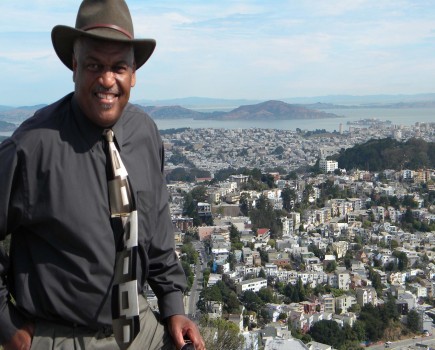 Bobby Ross Jr.
SAN FRANCISCO — It’s still dark outside as three-dozen men — some wearing hoodies, others button-down shirts — crowd into an inner-city house.
At precisely 5:30 a.m., they gather to pray and recount the previous day’s battle to stay clean from drugs — the foe they all share.
“In this world, it’s about you and God,” program coordinator Samuel R. DeVore tells them. “What did you do in his favor? How close did you get to him? Did you serve his purpose or serve others?”
The meeting is a part of the routine — a daily fresh start — at a faith-based substance abuse program started in 1989 by Church of Christ minister Kinwood H. DeVore, Sam DeVore’s brother.
“Kinwood, his brother and others that work with him have succeeded in touching lives positively that others did not want anything to do with,” said Richard Blythe, minister of the Lake Merced Church of Christ, one of the area congregations where Fresh Start frequently baptizes recovering addicts.
“I have an appreciation for what they do, and they don’t have a lot of competition, I guarantee you,” Blythe said. “There’s not a lot of people saying, ‘Move over and let us work with the same people you’re working with.’”
A one-time state prison chaplain, Kinwood DeVore said he grew tired of seeing so much community violence, and going to so many funerals, directly tied to drugs.
So he launched the Metropolitan Fresh Start House — a 24-hour, live-in treatment center. The Metropolitan Church of Christ serves as the parent organization.
The program attempts to deal not just with the symptom of the problem but also with the root cause.
“A whole lot of it is pain, and they use drugs to medicate that pain,” said Kinwood DeVore, noting that most of the offenders sent to Fresh Start grew up without fathers. “So that’s what we try to do is help them deal with those issues.”
Fresh out of jail, some clients last only a day or two at Fresh Start.
Others stay for months.
Out of 3,000 program participants over 20 years, Kinwood DeVore estimates that at least 600 to 700 defeated the enemy and live free of drugs.
Fresh Start aims to restore dignity, responsibility and personal pride to drug abusers, he said. That’s accomplished through hard work and a change in thinking — from self will to God’s will.
“Jesus Christ put out a net, and he’s pulling them in — catching all kinds of people,” Sam DeVore said. Fresh Start “is part of the net, but the one who’s pulling the net is God and Jesus Christ.”