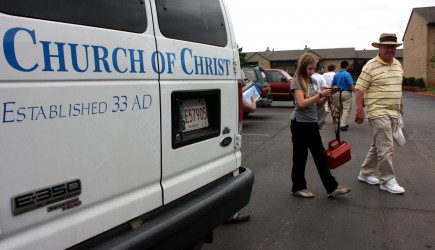 Erik Tryggestad
OKLAHOMA CITY — Two by two, Christians fanned out across the apartment complex, knocking on doors, handing out tracts and inviting people to church.
It might have resembled the campaigns of half a century ago. That is, until the group’s coordinator, Brad Vaughan, got a one-word text message on his cell phone — “baptism.”
Vaughan, who lives in Perry, Kan., traveled to the Sooner State to help members of the Cherokee Hills Church of Christ in a weeklong “Back to the Bible” campaign.
About 70 volunteers came from out of town, many of them from the Northwest Church of Christ in Lawton, Okla., southwest of Oklahoma City. For 35 years, Northwest members have traveled to communities to conduct “Back to the Bible” campaigns at the request of host churches.
Last year, Northwest partnered with other Lawton-area churches to reach out to their own city. That effort yielded 51 baptisms.
Nonetheless, Cherokee Hills member Jerry Barton said he was skeptical about the group’s chances in Oklahoma City.
“I said, ‘You watch. We won’t get 10 studies in 100 square miles,” he said. He gladly ate those words when, after the campaign’s first day, church members had set up 80 Bible studies.
Barton, a retired Federal Aviation Administration worker, spent most of the week knocking doors. Apartment dwellers, many of them in a transitional phase of life, tended to be more receptive than homeowners, he said.
On a break between rounds of door knocking, Dale Ferrier sat in a van borrowed from a church in Del City, Okla., and described how volunteers conduct Bible studies. Using New Testaments with underlined passages, they discuss with readers what the Bible says about subjects including baptism and manmade creeds.
“We give them what the Bible says and let them make up their own mind,” Ferrier said. “That’s really all there is to it.”
Knocking on strangers’ doors can be intimidating, but “typically, two doors and you’re fine,” said Ferrier, a member of the Centerville Road Church of Christ in Garland, Texas. “Once they realize that you’re not going to twist their arm and be confrontational, they’re more than willing to talk to you,” he said.
Edith Cliburn, 86, traveled from Franklin, Ky., to be a part of the campaign. She has participated in similar events since 1980, she said.
Emily Hopper, 13, also participated. Hopper, who attends the Cherokee Hills church, acknowledged that she had a few doors slammed in her face,
But she wasn’t discouraged.
“Because we’re doing this for God, so there’s not really anything to be scared of,” she said.
Her father, Ed Hopper, added that the joy of a positive response far outweighs the negatives ones.
“When you see somebody walk up to the church building — that you knocked on their door — it’s an incredible boost,” Ed Hopper said.
Calin Conley, 16, gave up a week of football camp to participate in the campaign. But that sacrifice was worth it when, after a Bible study, one of his students decided to obey the Gospel.
“When he said he wanted to be baptized, I couldn’t get the smile off my face,” Conley said.
By the end of the week, 31 people were baptized. As they rose from the watery grave, coordinator Dave Sexton placed their photos on a poster in Cherokee Hills’ foyer. In the weeks following the campaign, at least four more have been baptized.
Chad Lessly’s photo was the seventh added to the board. Campaigners knocked on his door and left him a flier with a contact number for Bible studies. He called, and they answered. Soon he was baptized.
“Romans 10:9-10 is pretty much what told me I needed to be baptized into the truth,” he said.
The verses read, “That if you confess with your mouth, ‘Jesus is Lord,’ and believe in your heart that God raised him from the dead, you will be saved. For it is with your heart that you believe and are justified, and it is with your mouth that you confess and are saved.”
“I’m a new creature in the Lord,” Lessly added.
The campaign also transformed the Cherokee Hills church, longtime member Bunny Chambers said.
“It has become easy to ask someone if they are interested in studying the Bible,” Chambers said. “It has amazed us at how many people are saying, ‘yes.’ None of us will ever be the same.”