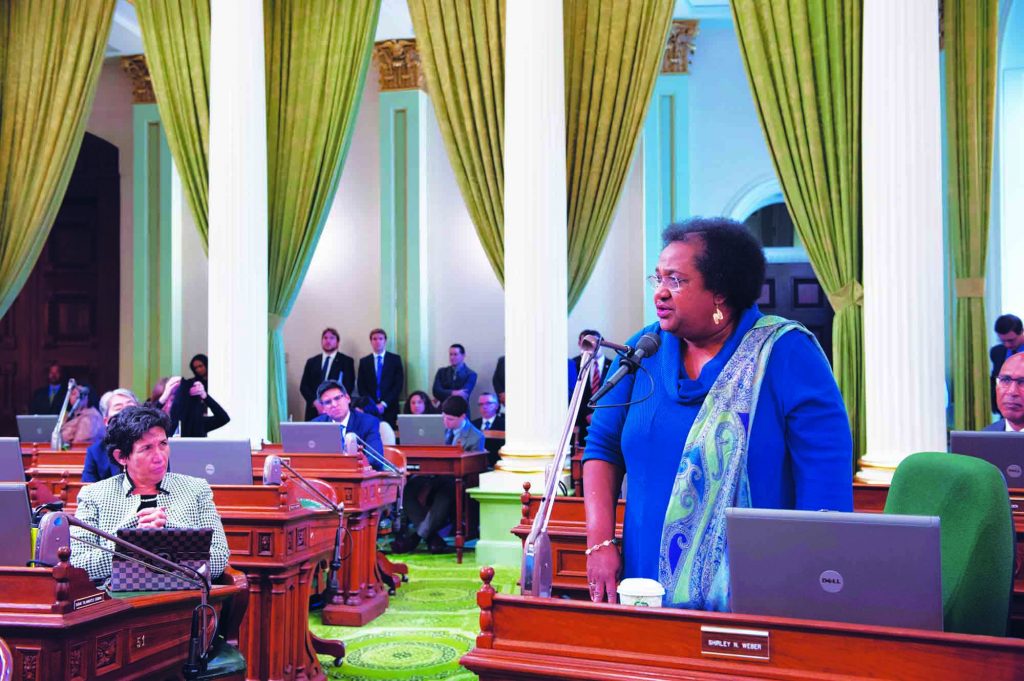 Professor and Politician Shirley N. Weber wants Christians pursuing elected office to stand for their beliefs from day one.

Weber, a member of the Division Street Church of Christ in San Diego who represents California’s 79th district in the State Assembly, ran for the office after a storied career in education. 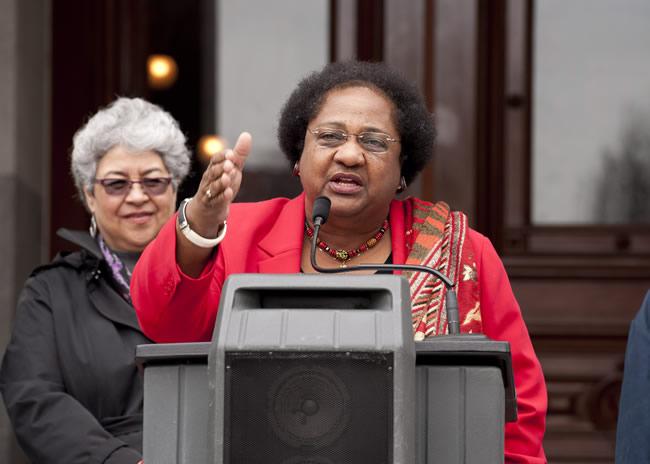 Shirley Weber speaks to a group of students. (PHOTO FROM A79.ASMDC.ORG)
She began teaching college at age 23 — in the midst of the turbulent 1960s. While in graduate school at California State University in Los Angeles, she was offered the chance to help San Diego State University develop an African-American studies program.

“I thought I would spend about a year teaching in San Diego while working on my dissertation,” she recalls. “Well, after 40-plus years, I am still in San Diego.”

She served on the National Council for Black Studies and helped develop study abroad programs in Ghana and South Africa. She hosted a weekly radio program, “It’s a New Day with Dr. Shirley Weber” that aired live from Johannesburg in 2006 — in which she shared the perspectives of students in the U.S. and South Africa. She has lectured throughout the United States, the Caribbean and Africa.

In the Assembly, she’s a passionate advocate for education. She also has chaired committees for elections, redistricting and the state’s budget. She has received Legislator of the Year awards from groups including the Red Cross, advocates for the disabled, the Black American Political Association of California and the Early Childhood Education Network.

She’s a regular speaker at church-sponsored events, including the Division Street church’s women’s seminar, scheduled for December.
Many people have a strong mistrust of politicians. How have you attempted to counter that?
I have a strong bond with the constituents I serve. Prior to coming to the Assembly, I spent 40 years helping families navigate the educational communities of San Diego. I did this before I sought office, not wanting anything in return.
“I came to this position because of my integrity and honesty. I refuse to allow the political climate to taint that.”
I have a strong respect for those I serve, and I believe they respect me. We do not always agree. However, they understand that my motives are not driven by personal interest. I try to use God’s gifts to help others.

I am a woman of integrity who fights difficult battles on behalf of children and families. Even my Republican colleagues have said they admire my work and integrity. I am not vindictive, and I don’t play political games. My word is my bond, and I strive to rise above the fray and make good decisions.
I mentor new Assembly members, and most members meet with me because they believe that people listen to me. When I rise on the floor, the noise ceases because they believe I have something to say — and generally I do.

I came to this position because of my integrity and honesty. I refuse to allow the political climate to taint that.
Working in politics must stress your spiritual values and faith. How do you manage?
I don’t wear my religion on my sleeve — or as a big sandwich board on my shoulders. I am not in the Assembly to condemn those who do not share my beliefs. I, however, do want them to see the peace, love, strength and determination I have as a result of my faith.

I accept the fact that I work with persons who do not share my faith. However, they share my belief in democracy and justice.

My faith drives my spirit and brings comfort to me in difficult times. If I thought I was put here to evangelize the Capitol, I would be highly frustrated. However, I can share my faith in my attitude, my perspective and my honesty.
“I accept the fact that I work with persons who do not share my faith. However, they share my belief in democracy and justice.”
My love for God causes me to love those who agree and disagree with me. Being in a political environment is no different than working at the university or for a major corporation.
Your background is in education. What influenced you to choose an academic career? 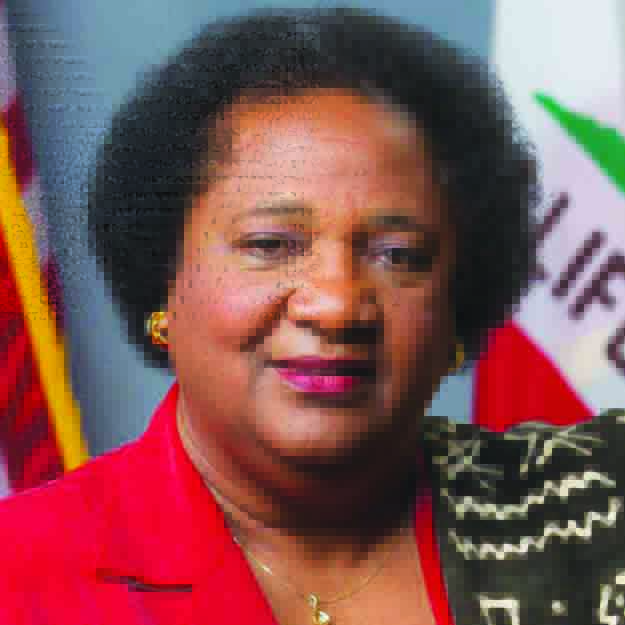 WeberMy father was a big proponent of education. He was raised in the Jim Crow South and was allowed only to go as far as the sixth grade. His family were sharecroppers despite the fact that they owned and farmed their own land. The society at the time demanded that they work the land of others so that they did not become too “uppity.” My father realized how limited he was and decided that his children should put education first.

I — the sixth of eight children — loved school and wanted to become a high school math teacher. I entered UCLA as a math major, but eventually discovered that math was too impersonal. I liked working with people. I met Dr. Arthur Smith (Molefi Asante), who was a professor at UCLA and a Church of Christ minister. He taught communications and black rhetorical studies.

As a student of his, I found my passion. He became my mentor and shepherded me through the undergraduate program. He nominated me for the Woodrow Wilson Fellowship. As one of 17 fellows in a class of more than 6,000, my fate to become a university professor was sealed. I was admitted to several graduate schools but decided to remain at UCLA for my master’s and Ph.D.
How did you decide to run for office?
It was never a goal of mine. When I ran for the school board in 1988, it was because the representative for our neighborhood was retiring. She actively sought a replacement. I had been a strong voice in the community for quality education and equity while working at the university. A group of educators and community leaders approached me about running. I declined, but they — and my husband — were persistent.

I was in the middle of my career and did not want to interrupt my plans. However, the community was in the midst of an integration court order, and someone needed to protect the interest of all children. I agreed to run. I said I would only serve two terms because I had unfinished business at the university. I served from 1988-96. 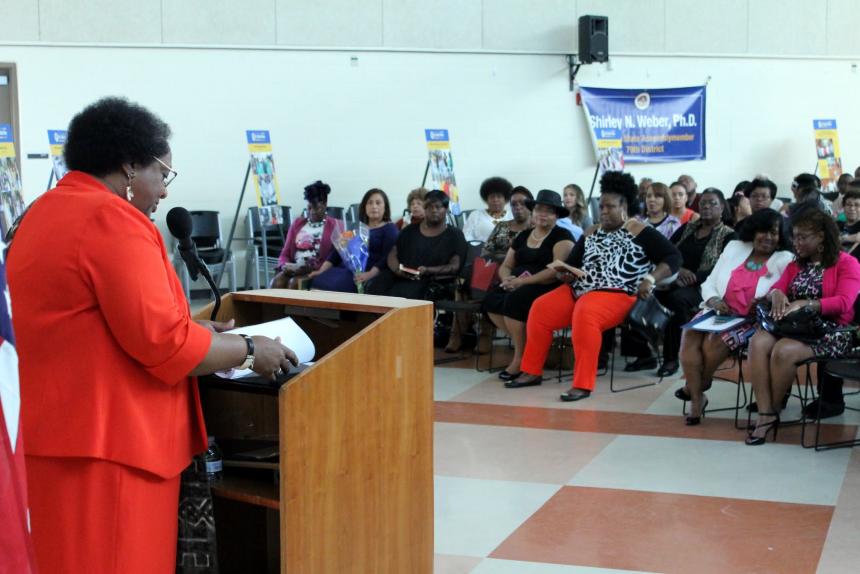 Shirley Weber addresses a crowd at a Salute to Women Leaders event. (PHOTO FROM A79.ASMDC.ORG)

I retired from the university in 2010. Two years later, I was approached by Assembly member Toni Atkins to consider running for the California State Assembly.

Initially, I refused. A few months later, after observing the critical state California was in and the need for someone with extensive educational background who knew K-12 and post-secondary, I agreed to run. I ran in the primary of seven candidates and came out first. I had more than 50 percent of the votes cast for Democrats. In 2012, I became the first African-American elected to any state position south of the Los Angeles area. I was re-elected in 2014 and 2016.
What advice do you have for Christians who are considering running for political office?
You set the tone of who you are and what you believe on day one — and people respect that. Your ability to help and care for your colleagues will cause many to seek you out, ask for advice and help you in difficult times.
RELATED:
• See more Dialogue features HERE .