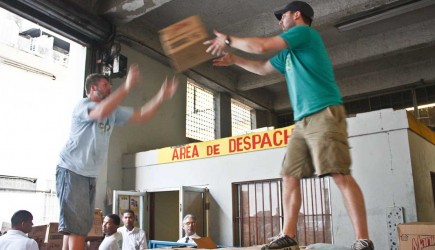 Erik Tryggestad
SANTO DOMINGO, Dominican Republic — “You’re going to Haiti?”
The immigration officer asked the question of every visitor in line at the Las Americas International Airport. If they said yes, he waved them through. They were excused from the $10 tourist fee.
The Dominican Republic has a long history of foreign visitors — all the way back to 1492, when an explorer named Christopher Columbus first landed here. Today, the Spanish-speaking nation of 9.6 million people occupies two-thirds of the Caribbean island called Hispaniola.
Since Jan. 12 the Dominican Republic has experienced an influx of relief workers headed across its western border into Haiti. The 7.0-magnitude earthquake that struck the Haitian capital, Port-au-Prince, claimed an estimated 200,000 lives and canceled all commercial flights to its airport.
Chad Mynatt felt the earthquake in the Dominican city of Rio San Juan, more than 200 miles from the epicenter. He was sitting on the floor of the children’s home where he’s worked since graduating from Harding University in Searcy, Ark., last May.
“I felt dizzy,” he said. He saw ripples in the water of the five-gallon jugs at the children’s home.
In the weeks since the quake, Mynatt has made multiple trips to the Santo Domingo airport.
“There’s definitely a lot going on here on the Dominican side,” he said as he shuttled American church members to the relief staging area — two seaside apartments rented by Manna Global Ministries. The Indiana-based ministry oversees the children’s home in Rio San Juan and other works in the Dominican Republic and Haiti.
Air mattresses and canned goods lined the walls of the apartments. Wipe boards contained detailed notes about flight arrivals, departures and supply runs into Haiti.
“It’s been crazy,” said Norm Currington, a missionary and director of Manna’s board. “Every day we don’t know what we’ll be doing. But by the end of the day, God has opened doors.”
Dominican-owned businesses have helped the ministry, Currington said. Workers bought food wholesale from a Santo Domingo grocery store and used volunteers to deliver it to Haiti.
Mark Gibson and Tim Bynum, members of the Fairfax, Va., Church of Christ, spent about a week making the supply runs. Every morning they rose at 4 a.m. and drove to the grocery store. After filling their truck with rice, canned sardines, tomato paste and spaghetti, they made the five-hour trek west to the Dominican border. On each trip, border agents waved them through.
Once in Haiti, they met Roberta Edwards, director of Son Light Children’s home in Port-au-Prince. Then they moved their payload to Edwards’ truck and began the long trip back to Santo Domingo. By the end of the week, Gibson had memorized most of the bumps in the road.
Another missionary with Manna, Brian Wallace, arrived at Son Light just days after the earthquake and helped coordinate relief efforts there. Haitian ministers have distributed the food from Manna to church members and others in need. Manna also has sent supplies and small medical teams to Haitian Community Hospital in Port-au-Prince.
“We have had so many amazing people step up and come help us in this venture — in both the Dominican Republic and Haiti,” said Laura Beth Lamb, Manna’s administrative director. “We have been blessed to rekindle old friendships and strengthen new ones through all of this.”
Wilson Reyes, a native of the Dominican Republic, formed new friendships with Haitian Christians after he made the trek across the border with a group of relief workers from a church in Tennessee.
Reyes, who attends a 120-member Church of Christ in the Naco community of Santo Domingo, has worked for Manna on well-drilling projects in the past. In Port-au-Prince he mixed cement and helped repair a gate at Son Light’s guest house. In his spare time, he played basketball with the neighborhood children.
“Most of the Haitians think the Dominicans aren’t very friendly,” Reyes said. “For me, it was a good thing to be there — to meet them and play with them, tell them that we’re friends, to show them Christ’s love.”