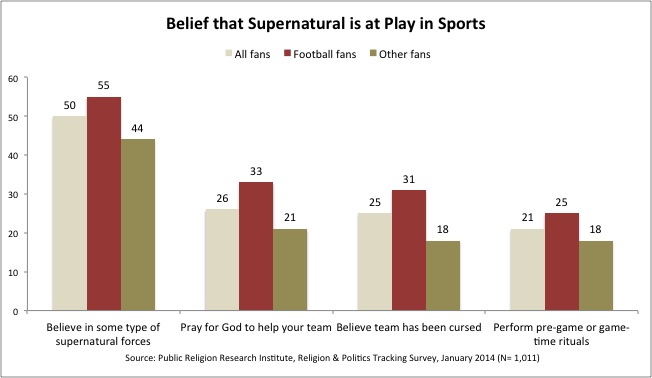 Does God have a rooting interest in the Super Bowl?

Just ahead of the Big Game, half of American sports fans say they see some aspect of the supernatural at play in sports.

Is God a Broncos or Seahawks fan?

Crazy question, most Christians would say.

The Super Bowl is Sunday.But just ahead of the Super Bowl, half of American sports fans say they believe God or a supernatural force is at play in the games they watch, according to a Public Religion Research Institute survey.

That percentage includes Americans who pray for God to help their team (26 percent), think their team has been cursed (25 percent) or more generally believe God is involved in determining who wins on the court or in the field (19 percent). Overall, half of Americans fall into one of these groups, according to the survey Public Religion Research Institute released Tuesday.

“As Americans tune in to the Super Bowl this year, fully half of fans — as many as 70 million Americans — believe there may be a twelfth man on the field influencing the outcome,” Public Religion Research Institute CEO Robert Jones said in a statement. “Significant numbers of American sports fans believe in invoking assistance from God on behalf of their favorite team, or believe the divine may be playing out its own purpose in the game.”

In today’s “Houses of Worship” column in The Wall Street Journal, Tennessee journalist Bob Smietana admits praying for his teams:

The first time I prayed for my favorite team to win was in the summer of 1982. I was 17 and working at a church camp outside Keene, N.H. About two hours to the south, my grandfather lay dying in a hospital bed in my hometown, Attleboro, Mass. One of his few remaining pleasures was watching his beloved Red Sox. Like so many Boston fans, he longed to see them win the World Series just once in his lifetime.

In church I had heard that God cares even for the smallest things in life—sparrows, lilies of the field, even the hairs on my grandfather’s head. So I prayed for a World Series win. He died in August; the Red Sox didn’t even win their division.

That didn’t stop my sports prayers. In 2004, the Red Sox actually made it to the World Series. Like her father, my mother was devoted to the team. Now she was wheelchair-bound with multiple sclerosis, and she and I both prayed for a Sox victory. Our prayers seemed to have been answered: Boston won the World Series and repeated the feat in 2007. My mother treasured those wins in her final years, before her death in 2009.

Reader feedback: What about you? Would you ever pray about the outcome of a sporting event?