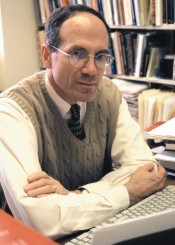 Dialogue: A conversation with Mark A. Noll

Lynn McMillon
Recognized as one of the foremost scholars in the field of American religious history, Mark A. Noll sees the world and Christian faith through uniquely trained eyes.
Noll earned a doctorate in history from Vanderbilt University in 1975 and taught on the faculty of Wheaton College until 2006. He now serves as Francis McAnaney Professor of History at the University of Notre Dame. He received the National Humanities Medal at the White House from President Bush in 2006.
Books Noll has authored include: “Christians in the American Revolution,” “Americas God: From Jonathan Edwards to Abraham Lincoln,” and “The Civil War as a Theological Crisis.”
In his latest, “The New Shape of World Christianity: How American Experience Reflects Global Faith,” this master historian explores the movement of Christianity from Europe to North America — and from there to Latin America, Asia and Africa. Noll, an evangelical Christian, seeks to “address the question of what American Christianity means for the worldwide Christian community.

What attracts people of the Global South to Christianity?

The prime general reason must be that individuals and groups find the
Christian message meaningful, true and effective. But given the tremendous diversity in the number of people turning to Christ over the last half-century, it is probably impossible to provide a single standard answer.

What does the global membership shift of Christianity southward mean?

This pattern is going on now and will probably increase in the future. If
current trends continue and the number of believers continues to skyrocket in Africa and China (and plateau or decline in the West), it would mean that the leading Christian forces in the world would have a Chinese or African tinge, instead of a Hellenistic, European or American tinge.

I don’t know enough about African and Chinese cultures to say definitely, but there may be more general Christian concentration on families, tribal groups, ancestors, formal social cohesion and other characteristics that remain stronger in these newer Christian areas of the world.

How important is the American expression of Christianity to the rest of the world?

But Christian communities around the world will all have the last say on their own destinies, rather than remaining dependent on the U.S. This end of dependency will happen later or, as in most cases today, sooner.
Perhaps more important is the history of Christianity in America as a model for what other believers in the world experience.

The United States pioneered the separation of church and state. American believers showed what could be done by organizing themselves. They built churches and Christian institutions through ad hoc and make-do means, and they relied almost exclusively on voluntary means to get the job done.

All of these characteristics, to one degree or another, are now what mark most Christian communities around the world. They could learn what to imitate and what to avoid by paying at least a little attention to how Christian faith has developed in America.

Dangers certainly include syncretism, or the covering of ancient religions or local customs with only a thin veneer of Christian faith. But it is always good to be cautious about thinking that one has spotted syncretism in others, since this problem is so easy to see in the other person and so hard to see in oneself.
How viable is the 19th century “restorationist” or “back to the Bible” message as an evangelistic tool today?

As Philip Jenkins has pointed out in an important book (“The Next Christendom”), avid Bible reading is widely characteristic in the new centers of world Christian growth. Much of this Bible reading does appear similar to restorationist patterns in early U.S. history ‹ that is, with the Bible being the mainstay instead of tradition, inherited wisdom or the dictate of ecclesiastical synods.

Yet it is also true that the American restorationist movements were able to take advantage of the United States’ unusually democratic practices, unusual opportunities for economic self-sufficiency and unusual freedom of movement due to the United States’ wide open spaces.
To the extent that these singularly American characteristics shaped the way that restorationists read and interpreted the Bible, then they may not be replicated in other parts of the world where the contexts are so very different.

Still, one of the prominent characteristics of Christianity wherever it is expanding in the current world is strong reliance on Scripture —  and that reliance certainly is reminiscent of the restorationist emphases in U.S. history.
What advice could you give to those undertaking mission work in the Global South?

The best possible advice must certainly be to burrow deep into the Christian faith for oneself and also learn as much as possible about the land and people to which one feels sent.

Mission work always involves proclaiming the gospel, but that proclamation will be most effective when missionaries understand the people and the cultures in which they are offering the gospel.

In our day and age, cooperation with local churches and Christian organizations is also a must. And sometimes even more than cooperation is needed. Sometimes it is necessary simply to ask, “What would you like me to do?”