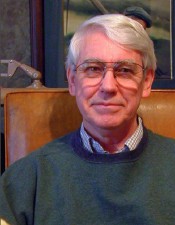 Dialogue: A Conversation with Mac Lynn

Ted Parks
LYNN, 66, leading church statistician and compiler of Churches of Christ in the United States, addresses the growth of our fellowship and the beliefs driving it.
There’s no headquarters anywhere on the globe, no official hierarchy to keep tabs. You see, we believe in autonomy. But how do you determine growth or decline in a body that cherishes its freedom of association so deeply that no congregation answers to any record-keeper but God?

For nearly 20 years, Mac Lynn has mapped the earthly terrain of the spiritual family of churches of Christ by compiling figures on how many saints there are, where they meet, and what kinds of institutions they operate.

Lynn writes in the year 2000 edition of Churches of Christ in the United States that putting together the comprehensive data in his book “requires considerable effort.” While he acknowledges a small debt to several state-level guides, Lynn’s national directory is based primarily on his own data collection.

Both Yeakley and Lynn are members of the Association of Statisticians of American Religious Bodies, an organization that compiles quantitative information about the varied religious landscape of the United States.

Lynn, who currently lives in Brentwood, Tenn., brings his own broad experience in churches of Christ to complement the scope of his statistics.

With a doctorate from San Francisco Theological Seminary and three masters degrees from Harding Graduate School, Lynn’s training as a theologian, he believes, suits him for the “application phase” of assembling and disseminating church data.

His extensive contact with a capella congregations aligned with the Restoration Movement positions him as a unique observer of the fellowship. Surrounded by the keyboards and bookshelves of his suburban home office, Lynn spoke about the past, present and future of churches of Christ.

Who are we as churches of Christ today?

Inthe early 1900s most of the churches that remained a cappella weresouthern and rural. And when the Depression came, and people startedmoving north, they started churches and carried their Southern ideaswith them.

Today, 20 percent of the churches are in Texas, and another 10 percent in Tennessee.

Whathappened at the beginning of the century was a quest to get thingsright according to the pattern. The boundary lines that were drawnincluded certain questions about what people could do in a churchservice, and about organizational structure and cooperation.

Thiscontinues to be pursued today by more than a fourth of our churches.The drawing of the boundary at classes or church support ofinstitutions has been a defining moment in the life of thesecongregations.

When we move over that lineinto the mainstream, about three-fourths of the churches, you havepeople still relatively close to the first group’s way of thinking. Themental processes by which you establish what is right in thesecongregations continue to focus on patterns.

Onceyou move beyond that to a lot of urban and larger churches, this is nolonger the defining issue. The last 25 years, the crucial point forthese churches is that we’re Christians but not the only Christians.They don’t preach much on patterns or organization. These churches arenot issue-oriented, but focused on spiritual development.

A common impression is that churches of Christ have leveled off in their expansion. To what extent is this true?

Thenumbers are so close, that it is almost too close to call. If there hadbeen a continuing growth factor, I think the numbers we’re picking upwould show it. But they’re not. My feeling is that the church hasplateaued and perhaps in the last couple of years started downward. Ithink we’re at least safe in saying that the numbers are plateaued.

Whatwe know is that the population continues to grow. In the United States,we have grown from 76 million to 281 million in a hundred years. We’vepicked up 200 million people. Churches of Christ have picked up onemillion. It’s 200-to-1 growth.

How do you account for the apparent lack of growth?

Backin the fifties, when people said we were growing, everybody wasexperiencing increase. In the sixties, churches began to decrease. Allreligious groups were suffering.

We knowthat churches mirror society. Society is not necessarily less religiousnow; it’s different in its religious aspirations. The issue is not alack of spiritual questing, but a lack of interest in some of thethings that had marked us. There’s less interest in righting thingsthan in just furthering a relationship with God.

Thereis also the question if people are as evangelistic. During theDepression or after World War II, when people moved, they started achurch. That does not appear to be happening any more.

Howmuch has a de-emphasis on the unique theological correctness ofchurches of Christ reduced the impetus for establishing newcongregations?

There has been a shift in theway people view church, gospel and other people. There is a lot oftraditional conservatism, and probably the majority of churches arestill very much there. But they’re not growing. There doesn’t seem tobe this fervor for bringing new people in.

Meanwhile,younger people are beginning to say, “If I’m not getting what I needhere, I’ll just go somewhere else, so what if it’s another group.” Thechurch’s back door is opening.

What would shut that “back door”?

I don’t know that the older population will be able to close it.

Thereare a lot of young people who are very spiritually inclined, just asthere always have been. I think if a significant number were to say,“We’re here to stay, and we have a lot to be grateful for and we’regoing to share it with others,” it would make a difference. Thequestion is, what is the likelihood the newer generation is going to doit?

They’re there for the picking. Now who’s going to step in, and inspire them, and point them?

What additional perspective can you offer on our progress as a movement?

Ourgrowth situation is not a question of laziness. It’s not that peoplehave quit being interested in others. There are many programsestablished during the last 50 years that people can get involved in,everything from colleges, to child care, to inner-city work. The listis endless.

To some extent the whole nationis caught up in these kinds of activities. My wife would want us to addthat the working of the Spirit of God cannot be discounted. It’scertainly not up to us to do everything.

Iknow many people who feel God is working in their lives, who arespiritually minded and who are praying. And these are people who arelocated across the span of differences in churches of Christ. And itcharacterizes people in other religious groups as well.

Filed under: Are We Growing Staff Reports