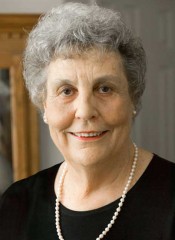 Dialogue: A conversation with Joyce Hardin

Missionary, author and educator Joyce Hardin has touched lives on two continents. She also has served as a role model for women around the world. Hardin, who grew up in West Texas and New Mexico, joined her husband, Dan Hardin, in 1958 in a pioneering mission in Korea. Dan Hardin served first as dean and later as president of Korea Christian College in Seoul. Joyce Hardin taught at the school and was a partner in evangelism. The Hardins returned to the United States in 1976, where they served as faculty and administrators at Lubbock Christian University in Texas for 24 years. Joyce Hardin was dean of the College of Education, earning a doctorate from Oklahoma State University. Together they trained several missions teams and did short-term missions. Joyce Hardin joined Missions Resource Network in 2000 as coordinator of missions education. She conducts teacher workshops and coordinates missions training seminars for churches. Author of two mission books, she has also published four Bible school curriculum series. After a long illness, Dan Hardin died in 2006. The couple has three daughters: Mara Ashley and Danna Willis, missionaries in American Samoa, and Terry Brimberry of Austin, Texas. Joyce Hardin is a member of the Westover Hills church in Austin, Texas.

Since you spent 17 of your first 18 married years in Korea, what effect did it have on your marriage?
Dan and I arrived in Seoul one week before our first anniversary. I was three months pregnant with our first daughter. We had no mission training, knew very little about Korea and had no real concept of the difficulties of living and working in a culture so different from our own. Our goal was simply to share the gospel with the Korean people.
Finding ways to reach that goal shaped our marriage. There were no family or church to help solve problems, and so we looked to each other for support, for acceptance and for intimacy. As a result, our marriage became a true partnership with the senior partner being God. There was no “his and hers” which sometimes meant a change in traditional roles and role expectations — something that continued even after our return to the States.

What misconceptions did you have about Korea?
In 1958, South Korea was designated a “Third World country,” so I half expected to be living in a mud hut and dealing daily with poverty and ignorance. I quickly found that the poverty was due to a devastating war and that Korea had a beautiful and ancient culture.

Is it true that a wife is as much a missionary as her husband?
Absolutely. Often little is said about the day-to-day existence of the missionary family, but it is through day-to-day life that the missionary family translates its life to those about them — either a message of love and peace or distress signals of unhappiness and discontent. It is this message that may cause local people to see something of worth in this thing called Christianity.
That said, I think the time should come when the missionary wife finds her own ministry based on her own unique gifts and abilities. For me, I began to teach Christian education courses at Korea Christian College. For others, it might be using their medical skills, training local women, developing Bible class materials — the list is as unique as the women themselves.

How has the Korean church changed from then to now?
Koreans are a spiritual people and readily accepted the belief in Ha-Na-Nim (the “one” God). The nation is the most Christian nation in Asia with church buildings on every hilltop in every neighborhood and with many varieties of Christianity — including some that are indigenous to Korea.
Early on, Churches of Christ in Korea were often deeply imbedded with the “pastor” system. Some of that still exists, but many have elders and deacons as well as pulpit preachers. As in the United States, congregations are autonomous, and interpretations of Scripture vary.
Instrumental music is found in some congregations, and the woman’s role is changing to allow women to be more active in ministry.
To me, the most significant change is that Koreans no longer need missionaries. Instead, their congregations are sending missionaries to China, Siberia and other parts of the world.
In what ways was your faith tested on the mission field?
My faith grew more that it was tested. For example, it was difficult to be so far away from family in the States, especially when illness or death became an issue. Communication was difficult and transportation costs prohibitive. However, God always provided an answer, and that made my faith grow.
People do not always live up to expectations, and it was disappointing to see Christians fall away or become materialistic.  However, that is not unique to the mission field.

How did your years on the mission field change you?
Korean Christians believe strongly in the power of prayer.  A visitor to your home would not start a conversation until he or she first prayed for you and your family — and there are not many nations that start the day at 5 a.m. with church bells calling people to morning prayer. That example made prayer a significant part of my life.
When you live and work in another culture, you learn that you do not have all the answers.  I think that is why learning is so important to me as Christian. It has also helped me to be less judgmental.
My husband was my greatest motivator and mentor. He not only encouraged me to find a ministry and to use my talents but often pushed me in directions that challenged me. My teaching at Korea Christian College started a career as a teacher educator, and my interest in women and culture produced a book used to train missionary women.
I think my life would have been very different had we not gone to Korea. I thank God for giving me Dan Hardin and sending us on a mission.