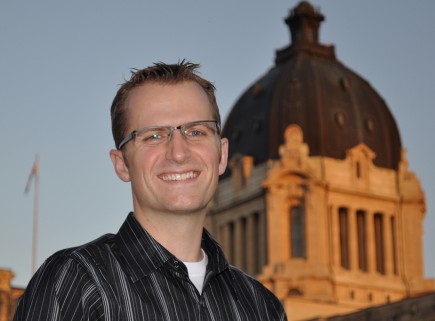 Dialogue: A conversation with Jason Bandura

Lynn McMillon
NATIVE-BORN MINISTER credits much of his faith to close family relationships among Western Canada’s Churches of Christ. The region’s small churches face big challenges reaching the lost, he says.
Jason Bandura is Canadian through and through — right down to his love of the Saskatchewan Roughriders, one of the eight teams that comprise the Canadian Football League.
Born and raised among Churches of Christ in the central province of Saskatchewan, he earned a bachelor’s in theology from Western Christian College and a Master of Divinity from Canadian Theological Seminary. For two years he served the Saskatoon church. Now 32, he ministers for the 170-member Glen Elm church in Saskatchewan’s capital, Regina.
In Canada, “our culture is obsessed with freedom, leisure and comfort,” Bandura said. Winning souls is difficult.
Churches of Christ in Canada also face an “identity crisis” of sorts, he said.
“At times, we wonder about our place within the larger evangelical community. For some, the matter of distinctness within this larger Christian community is crucial. For others, unity is the headline concern.”
Though small and scattered, churches in Western Canada have close family relationships. Such connections were essential to Bandura’s development as a Christian, he said.
“Perhaps our greatest challenge is tied to our greatest opportunity — to be authentic in our faith and to seriously seek our Father, our Lord and our comforter,“ he added.
Bandura is married to his high school sweetheart, Shannon. The couple has a 1-year-old daughter, Emmanuelle.


What, in your opinion, is the state of unity among churches in Canada?
In the West, I witness warm relationships among congregations. Doctrinal discussions, especially around matters like instrumental worship and women’s roles, have caused the usual ripples, but I like to think that we are a well-focused people who recognize that unity among diversity speaks a beautiful word into a society suspicious of the church as nothing more than a peculiar group of petty people.
Churches in Canada are small and few. Few cities have more than one congregation, and many congregations are separated by hundreds of kilometers. This has driven us to pursue wider Christian unity with a greater intensity than a Bible Belt congregation might feel.
How active are Canadian churches in evangelizing Canada?
In a sentence, not as active as we need to be.
I think the average congregation, even the average Christian, struggles to see how real-life evangelism should take place.
Much of the discussion these days on the missional church springboards off ideas that Lesslie Newbigin expressed in the 1980s, upon returning to Europe after decades in India.  He spoke to how evangelism should happen in a land that is already “mostly Christian.”
Much of what I read now comes from American authors. I occasionally sense a measure of shock that their “Christian nation” might no longer be.
In Canada, that illusion was laid to rest before I was born.
And perhaps that has slowed our evangelism efforts. We know that people are suspicious.  They are on guard against “sellers,” and sadly, many Christians have never seen another way of sharing Christ. So we seek ways that are authentic and true to connect with people.
It is slow going most times. We very much need the Spirit to lead us.

What opportunities do you see for Canadian churches in the near future?
Our greatest opportunity may lie in the fact that the vast majority of people in our society are not lovers of religion. In fact, most are skeptical of organized religion.
How is that an opportunity?
If we show ourselves to be more than merely “religious folks,” if the grace of God and the ways of Jesus and the work of the Spirit are evident in our lives — in other words, if we are the “real deal” — then the opportunity is grand to show our nation that there’s more to Christianity than they thought there was.
Our current “cold-to-religion” context forces us to be authentically God’s children. If we do so, our witness could be powerful. If we do otherwise, we’ll simply confirm what so many already believe about religion. I see that as a grand opportunity.
What changes are happening with young Canadian leaders, and how is this affecting the church?
I am blessed to meet regularly with ministers from a half-dozen other congregations around the region. Some commit to multi-hour drives to make this day together happen four times annually.
What stands out to me about this group is the deep sense of brotherhood that exists despite our diverse backgrounds and diverse congregations. Perhaps this type of thing would have happened in past decades, I can’t be sure.  But it strikes me as unique and beautiful.
I also take note of the wide range of influences upon leaders my age. The writers we read, workshops we attend and speakers we listen to extend from within the tightest core of the Churches of Christ to practically every corner of the evangelical world, and beyond that.
In my opinion, both of these factors are thoroughly good for the church — not always settling, but good, all the same. Our sense of God’s family is growing, and our quest for truth is leading us to refreshing and life-giving wells, some of which have not always been on our maps.

Aside from financial assistance, how can U.S. churches help Canadian churches?
We need the prayers of brother and sisters. As is often the case, the moving of the Spirit can be preceded by the interceding of the saints. We need both of these — the interceding and the moving — in our efforts to impact our land with the message of Jesus.
While financial assistance is assumed in the question, a qualifying statement may be worthwhile. Financial assistance may be most fruitful if directed towards ventures such as new church plants or the development of our Bible colleges. Both of these are essential to the future of Canadian churches.
Some final thoughts: Inspire us. Show us lives lit up with God’s Spirit. Be churches known for their love. Display a passionate pursuit of Jesus Christ.
And look northward every so often. You may find yourself as the one inspired by seeing how the Kingdom is being built north of the 49th parallel.


Filed under: The Church in Canada