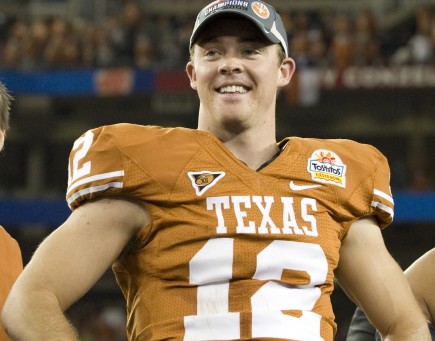 Dialogue: A conversation with Colt McCoy

Lynn McMillon
CHRISTIAN, QUARTERBACK, HEISMAN CONTENDER  says his parents and grandparents instilled the spiritual values he takes to the gridiron.

When Daniel “Colt” McCoy traveled to Iquitos, Peru, in 2008, the children he met on his 10-day mission had never heard of American football, the Texas Longhorns or their star quarterback. They were kids who slept on dirt floors in the Amazon jungle with little knowledge of the rest of the world, according to ESPN The Magazine. McCoy, 23, a runner-up for the 2008 Heisman Trophy and recipient of the Walter Camp Award, used sports and Bible stories to teach the children. He went to the South American nation on another mission trip this past spring break. Last year he was the most accurate passer in college football and was named Offensive Player of the Year for the Big 12 conference by the Associated Press. This season Longhorn fans have their eyes on a Big 12 title and the national championship. Sports analysts again consider McCoy a strong contender for the Heisman. But McCoy is much more than a gridiron great. He rarely misses a Sunday service — even when his team returns late from an away game the night before, said Randy Yarbrough, who worships with the quarterback at the Westover Hills church in Austin. McCoy loves to speak to church groups and credits his regular Bible reading and prayer with making a huge difference in his life, said his grandmother, Jan McCoy.


Who are the key spiritual influences in your life?
Most of all, my family. Both sets of my grandparents were believers, and it was shown in all ways in their everyday lives.
My mom and dad were my first examples of what a Christian life should look like.
We didn’t have much choice, though, when we were young. We were at church every time the doors were open — and sometime when they weren’t.
It was not an option to miss church for anything. Wherever we were — even on vacation — we would stop and find a church to worship with.
Those priorities made a big impression on me and my brothers. It wasn’t always easy on my parents, but being in worship … and encouraging others was always a priority.

What are your goals in your final year of college?
My goals for my senior year are simple: To be the best I can possibly be for my team, my coaches, my school, my family and most importantly my heavenly father — not just on the field, which is very important, but off the field as well in all of my relationships with others.
I would like to have the ability to help others reach their highest dreams and goals and be the influence God wants me to be.
On the field my goals are simple: To win all the games and play for the glory of God.

Why did you decide to come back for your senior year rather than go pro?
I love to play football, I love my teammates, I love my coaches, I love being a Longhorn and what that means in Texas.
Very few people get an opportunity to start at quarterback for a school like the University of Texas for four years, and that is very special to me. We have not reached all our goals yet, and I just couldn’t leave without doing everything in my power to help my team achieve them. We are working very hard and the chemistry is building. I am so glad to still be a part of this team.
I do want to play at the next level and hope and pray that those things will come. But for now I’m right where I need and want to be.

How do you maintain Christian values on a national stage?
It is my priority. I feel that I have been blessed and given a talent, and I should always give something back. My values … keep me focused in the right direction. Without my Christian values I would just be another someone who thinks they are good because of who they are or what they have done.
I believe that I can do all things through Christ who strengthens me. Therefore the pressures I face are given to a much higher authority and it allows me to focus and be the best quarterback and leader I can to help my team be their best.
How does the thought that you are a role model to young people alter your lifestyle and goals?
Well, I hope it hasn’t made me alter them at all. I was taught at an early age the way I was supposed to act and treat others, and there was never really any acceptance of anything less.
My parents set high standards for me and my brothers and were very strict and demanding about the way we acted, especially in public. So I learned that people were watching and that doing things right was important — and that being helpful to others was important, too.
So I guess you might say that I was raised with those expectations, and nothing has changed.

What advice would you give your brother and other high schoolers facing college next year?
I have been extremely close to both Chance and Case my whole life. They have supported me like no others and I love them for that. They are both very good athletes and I have to work real hard to stay ahead of them.
It has been fun to watch them get better each year. Chance is doing great at Abilene Christian University. Case will be a senior at Graham High School and is playing for my dad like I did in high school. We were all raised the same way and we have all had high expectations for ourselves. I have encouraged them to always work hard and take care of themselves.
Be disciplined and be willing to give up things that take away from you being the best you can be. Sacrificing is a hard thing and we all need encouragement at times. So that is what I try to be to my brothers — an encourager.

What is your favorite scripture?
Colossians 3:23 — “Whatever you do, work at it with all your heart, as working for the Lord, not for men.”
Editor’s note: Appreciation is expressed to University of Texas Athletics for providing the following additional responses from Colt McCoy regarding his faith.

On his personal faith story: My faith story is I grew up in the church with my family, born and raised going to church every Sunday morning and every Wednesday night. It was just a part of what we did. I gave my life to Christ when I was 14 on July 8, 2000. That’s why I’m here today, that’s why I play, because God has given me so much ability and I think He’s put me in this position to do good things and to be an example for Him.
On his faith every day: It guides me every day. Without faith, we are nothing, and without God in my life, I personally am nothing. Jesus was the greatest example that He gave us. Having faith in Him and what He did for us is awesome.
On his faith in practice and during games: I think that if you’re a Christian, you have the attitude of a servant; you have the attitude of a leader. If you can be an example, just like Jesus was on this earth, around people, then they start to see the same thing and it makes life a lot easier.
On his Christian mentors: I talk to my grandfather and my dad all the time. They’re probably the two guys that I look up to the most. Also, I think being able to go to church on Sundays and being able to get in the Word every day helped me in my life.  Reading the Bible every day and learning from the examples in there is also important.
On his favorite Bible verse: For different things I have a lot of favorite Bible verses. Before I play, I always read Psalm 18. It’s a long passage about David, but it’s one of my favorites. I also like Colossians 3:23 and Jeremiah 29:11.
On life after football: I hope to play in the NFL, but after that, I don’t really know. I’m trying to get my degree right now. I know God has plans for me, and I just want to do His will and let whatever happens in my life happen. If I’m living for Him, I know something good will happen.
On playing QB at Texas: It’s a blessing. Coming from a small 2A high school, I always dreamed of being in this position, but never knew it could work. I love it, and I’m doing the best I can.
On handling pressure: There are all kinds of pressure. The expectations are high every year, but I like it. I feel God has put me here for a reason and hopefully we’ll keep winning games.
On what motivates him: I want to be the best. I think that’s why I play this game, because I want to be the best. I want to play a perfect game. I don’t think that can ever happen. There are always going to be mistakes, and things will always happen. A quarterback is measured by how many wins he has and I want to be the best.
On his favorite Longhorns memory: There are so many. From watching Vince [Young] lead us to the National Championship, to being MVP of the only two bowl games I’ve played in. But I always say that the best moment is suiting up and going to practice with my teammates every day. That’s what it’s all about, the fun part of doing this. They only get to see us play on Saturdays, but they don’t know what goes into the whole program and how hard we have to work. I would say those are probably the best memories that I have, going to practice, just hanging out with guys in the locker room and off the field.