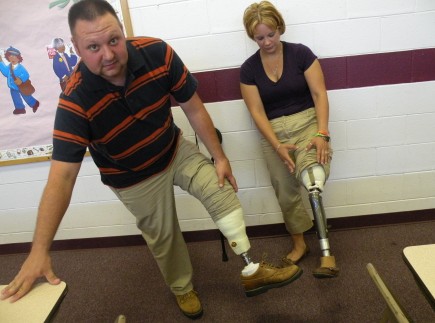 Despite tragedy, couple confident God has a plan for them

Bobby Ross Jr.
SOUTHGATE, Mich. — Aaron and Jennifer Wilmoth’s 3-year-old son, Hayden, hops around the house with a smile on his face.
When his father asks what happened to him, the little boy explains that he fell off his bicycle.
“God will fix me too,” he tells his dad.
Nearly a year ago, Hayden’s parents — active members of the Gateway Church of Christ — both lost their lower left legs in a motorcycle crash.
The Wilmoths also lost two of their best friends: Gateway elder Dan Tarjeft, 48, and his wife, Jennifer Tarjeft, 51, the church secretary, died in the crash.
As the anniversary of the May 17 tragedy approaches, Aaron and Jennifer Wilmoth do their best to laugh through the pain.
“It is the coolest leg in the world,” Jenn Wilmoth, 30, said of her high-tech prosthetic left leg with the elaborate knee. “All the settings are done through the computer. I have covering for my leg that looks like flesh. To be honest, you wouldn’t be able to tell my leg isn’t real.”
Attached at mid-calf, 33-year-old Aaron Wilmoth’s artificial leg weighs 8 pounds.
Jenn’s prosthesis weighs almost twice that — 15 pounds — and she jokes that she has a much heavier load to bear.
In fact, the entire Gateway church carries the lingering heartache of that Saturday night.
“The best way I can think to describe how the congregation is getting along is to compare it to Aaron and Jenn,” said Darlene Gardner, a longtime member who was close friends with Jennifer Tarjeft. “They each lost a limb — and likewise, the congregation lost a limb as well.
“So the other parts are making up for the loss, and sometimes we just fall short.”
But throughout the last year, God has kept blessing and showering his love on the 300-member congregation, Gardner said.
“Aaron and Jenn are such a source of encouragement and strength — not only spiritually but physically as well,” she said. “They are two of the most determined individuals that I know. There is no doubt that God is working in their lives.”
THE RIDE TURNS DEADLY
The Saturday night of the crash was supposed to be a test run.
The Tarjefts and the Wilmoths — along with Gateway deacon Ron Hyder and his wife, Nina — were planning to start a motorcycle ministry for Detroit area congregations.
That night, the couples revved their engines and proceeded along the route they thought might work for the ministry. The Tarjefts and the Wilmoths had followed the same path two weekends before. This time, the Hyders joined them.
The Christian cyclists were stopped at a traffic light, laughing, listening to music and looking forward to a leisurely dinner, when Aaron Wilmoth spotted something out of the corner of his eye. “A tan blob coming up at an angle” is how he’d describe it later.
In a millisecond, Jennifer Wilmoth felt herself thrown off the couple’s motorcycle and through the air — “like someone had put me in a slingshot,” she said.
Next thing the Wilmoths knew, they were sliding across concrete and caught in a blur of blood and emergency lights.
The couple landed about 15 feet from each other. Aaron heard Jenn’s frightened screams, but she said she blacked out and recalls little of the immediate aftermath.
“I laid myself at the Lord’s feet and asked him to do his will, but please don’t let Hayden lose both of his parents,” she wrote later. “So I let myself go and let God take over for me.
“Because of the faith and trust in the Lord, I am here today. To have the power of the Lord working through you is so powerful that words can’t explain it. The Lord has truly blessed me and strengthens me through everything.”
The crash occurred when a car driven by a 34-year-old drunken driver named Patrick Slope hit another car.
That car careened into the Wilmoths’ motorcycle and then struck the one the Tarjefts were riding.
The Hyders were riding last in the line of motorcycles and avoided the crash. They were not injured physically.
“This could possibly be it,” Aaron thought as blood poured from his leg.
“God, if this is the time and this is when you want me,” the former police officer remembers praying out loud, “then let your will be done, but please forgive me for my sins.”
But Ron Hyder removed Aaron’s belt and tied it tightly around his leg. That slowed the bleeding to a trickle — and quite possibly saved his life.
“I know God has a plan for us,” Aaron said. Otherwise, he said, God wouldn’t have placed Ron Hyder at the scene that night.
If the same crash had happened on the ride two weeks before, Aaron said, “I would have laid there and died.”

LIFE AND DEATH
Why did the Wilmoths live and the Tarjefts die?
Even as they focus on their recovery and put their trust in God, Aaron and Jenn can’t answer that question.
No one can.
“Do I understand why it happened? No. Will I understand one day? Absolutely,” Jenn Wilmoth said. “And I want to get to heaven to find out why it happened.”
Alicia Tarjeft, a student at Rochester College, a Christian college in Michigan, said she makes sense of her parents’ deaths by “stopping and remembering where they are.”
“I do not know why God called them home, but … God knows what he is doing,” she told The Christian Chronicle.
Despite losing her parents, she said, “I still have literally hundreds of people who would do anything for me, and I would not have that without my Christian family.”
The youngest of the Tarjefts’ three children remembers her parents as model Christians whose “love for Jesus shaped everything they said or did. They never stopped sharing Jesus with others because his place in their hearts allowed him to shine completely through them.”
To Aaron and Jenn Wilmoth, the Tarjefts were more than friends. They were mentors and confidants in the faith.
They were true Christian role models who bubbled over with enthusiasm for the Lord and the church.
“Jennifer (Tarjeft) was the perfect example of a Christian wife,” Jenn Wilmoth said. “She could smile and light up the room. Her laugh always made me laugh harder. She was so kindhearted and always willing to help and take time to listen.
“Dan and Jennifer will always be missed by us. Hayden still talks about Uncle Dan and Aunt Jennifer and how he misses them.”
Dan always wore a Hawaiian shirt in the summer. Jenn Wilmoth said she can’t look at a Hawaiian shirt without thinking of him. Aaron said he still catches himself struggling with one of life’s problems and wanting to call Dan and ask his advice. He closes his eyes and hears Dan’s voice: “Aaron, what would God want in this situation?”
“I miss Dan and Jennifer more than you will ever know,” Aaron said. “They are and will always be the backbone at the Gateway church. They were both involved in everything, no joke.”
FAITH AND FORGIVENESS
Jenn Wilmoth walks with a slight limp.
Occasionally, someone at the supermarket will ask her why.
“Well, I don’t have a leg,” she replies and chuckles to herself.
Hayden thinks it’s really cool, Aaron said, that his parents “get to take off their legs and charge them.”
Such is the new normal for the Wilmoths, who try to find blessings in the tragedy. Both have returned to work: Jenn as a mortgage processor, Aaron as a truck and tour-bus driver. Aaron is also back in charge of the Gateway church’s transportation ministry.
“He’ll tell you he can’t get up and teach a class, but he can drive a bus,” Jenn said.
“That’s true,” he said with a smile.
Shopes, the drunken driver, was sentenced in October to 40 months in prison for killing the Tarjefts and injuring the Wilmoths. He pleaded no contest to two counts of operating a vehicle while intoxicated causing death and two counts of operating a vehicle while intoxicated causing serious bodily injury.
The Wilmoths said they have forgiven Shopes. “I have let go of the past and moved forward, which has become much easier every day,” Jenn said.
Her relationship with Aaron is much stronger and more loving than ever before, she said. “I have learned to depend on him more, which was hard for me. I have discovered myself and how I want people to see me,” she said. “Like I have said since the day I woke up in the hospital: God has a plan for me.”
Said Aaron: “I don’t understand how people make it through life without God. This accident has reinforced that we have to lean on God daily. As long as your priority is the Lord, he has a wonderful way of working things out.”