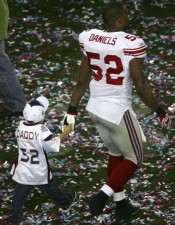 Erik Tryggestad
‘I feel like a bride-to-be,” said Torrance “Tank” Daniels, referring to the impending arrival of his Super Bowl champion ring.
“I gave them my ring size … I just can’t wait to see it,” the New York Giants linebacker told The Christian Chronicle from his New Jersey home. He and his wife, Courtney, were packing for their native Arkansas, where they’ll spend the offseason with their 4-year-old son, Jaxson, and 2-year-old daughter, Grayson.
Dan Cooper, minister for the Pitman church in Sewell, N.J., stopped by to help. The church, where the Daniels are members, had hosted a party for the couple the night before.
The celebration capped a year of extremes for 26-year-old Daniels, who finished his second season in the National Football League.
In August, he was cut from the Philadelphia Eagles’ roster and didn’t know if he’d play again.
Four months later, he was helping the unlikely Giants reach pro football’s biggest stage.
But don’t expect to see him pull a Magic Marker out of his sock — or a cell phone out of a goal post — after a big play. Sure, he gets excited when he forces a fumble, but showboating is “not my personality,” he said.
His friends agree.
Scott Adair, one of Daniels’ professors at Harding University in Searcy, Ark., described him as humorous, insightful and humble.
Whenever he visits Searcy, Daniels takes part in a weekly Bible study with other athletes — a study he and Harding teammate Scott Dutile founded in 2004.
“It’s like he never left and made it big,” Adair said. “He’s just Tank. He’ll always be approachable, hilarious and unafraid to shed a tear.”
FROM HARDING TO THE NFL
Years before he joined the ranks of Eli Manning and Michael Strahan, Daniels was a sports star at his small high school in Clarendon, Ark. In track meets he competed against Jeb Huckeba, a standout at Harding Academy in Searcy who later spent two seasons on the roster of the Seattle Seahawks.
Daniels’ football skills earned him a partial scholarship to the University of Arkansas at Pine Bluff, a Division I school in the NCAA’s Southwestern Athletic Conference. But Daniels had a hard time getting excited about the offer. He asked Jeb Huckeba for advice.
“Jeb said, ‘Give my dad a chance,’” Daniels said. Huckeba’s father, Ronnie, was defensive coordinator for the Harding University Bisons. Daniels enrolled at Harding and was a walk-on for its Division II football team.
“I truly believe that God sent me there,” he said.
It didn’t feel that way at first.
Low test scores kept Daniels from playing. A redshirt freshman, he sat on the bench during games. In the classroom, he sat in the back and said little.
“I hated it — absolutely hated it,” he said. But he faithfully hit the books, and the weight room, and was a starter for the Bisons the next season. In the years that followed, “he became more and more of an impact player,” said Ronnie Huckeba, now the team’s head coach. In four years, Daniels racked up 237 tackles, 10 forced fumbles, seven interceptions and four fumble recoveries.
But it was his strong work ethic and infectious personality that distinguished Daniels as a player, Ronnie Huckeba said.
“He really brightened up the locker room,” the coach added.
In 2006, Daniels became the first Harding graduate to play in the NFL, signing with Philadelphia as an undrafted free agent. He played six games with the Eagles and had five tackles.
After he was cut, Daniels went to workouts with the Dallas Cowboys and Tampa Bay Buccaneers. Both clubs were impressed, but had no spot for him on their rosters.
Then Daniels got a call from Steve Spagnuolo, his former linebackers coach with the Eagles, now defensive coordinator for the Giants. Spagnuolo didn’t have a roster spot for him either, but asked Daniels to join the Giants’ practice squad. He told Daniels that he knew the young linebacker would work his way onto the team.
On Nov. 27, he did exactly that. Daniels played in four regular-season games with the Giants and made key tackles in the playoffs.
In the NFC wildcard game against Tampa Bay, he knocked the ball loose from Micheal Spurlock on a kick return, setting up a field goal that helped the Giants move closer to the Super Bowl.
STAYING REAL
Being a Christian, husband and father while playing in the NFL is tough, said Daniels, who met Courtney at Harding and was baptized alongside her at the Downtown church in Searcy.
Sometimes, it seems like “you have to go against everything everyone else does,” he said.
The encouraging e-mails he gets from his Harding classmates help. So does his time with fellow church members.
Even during the hectic football season, Daniels met on Tuesdays for Bible study and prayer with a group of men from the Pitman church.
“So many times, the world is so crazy,” he said. “Tuesday is my day to be real.”
On and off the field, Daniels serves as a role model for members of the Pitman church, Cooper said.
“Another dimension of Tank’s Christian maturity that I admire is his willingness to connect with the little wide-eyed kids as well as the widow Christian sisters who are so frequently overlooked by athletic heroes,” the minister added.
Daniels’ children are constant reminders of his duty as a Christian role model, he said.
At the Super Bowl, Jaxson gleefully followed his father around the field. The 4-year-old memorized the roster and could identify all the players — even in their street clothes.
His son’s enthusiasm also helps remind Daniels that football “is just a game.”
“It’s a kid’s game,” he added. “We’re just men who are playing it.”