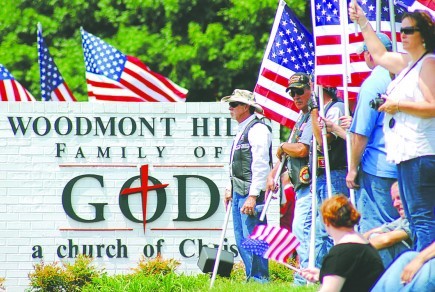 From Staff Reports
NASHVILLE, Tenn. — Kevin Balduf was a senior at David Lipscomb Campus School on Sept. 11, 2001.
As students arrived for chapel that day to pray for the victims of the terrorist attacks on U.S. soil, Balduf grabbed an American flag and waved it.
His classmate, Matt Dickerson, told The Tennessean that Balduf “always knew what he was going to do. He was going to be a soldier.”
The Marine sergeant, 27, died May 12 in Afghanistan while supporting fellow Marines in combat as a radio operator.
“This young man embodied the character we want for all of our students — a strong faith, integrity and a commitment to service,” Lipscomb University President Randy Lowry said.
An extremist Kansas church known for picketing the funerals of U.S. military personnel announced that it would protest at Balduf’s funeral June 13. In response, nearly 2,000 people gathered on the grounds of the Woodmont Hills Church of Christ to oppose the Westboro Baptist Church’s message. Three protesters from the Kansas church picketed near the church’s property for less than 10 minutes before leaving.
Balduf’s grandfather, Charlie Newsom, thanked the counter-protesters.
Inside the church building, a crowd of mourners remembered the fallen Marine, survived by his wife, Amy, and daughters Stephanie, 5, and Eden, 3.