Leaders see God in the circumstances that brought these two disparate congregations together.

WILMINGTON, Del. — In its heyday, the Cedars Church of Christ sometimes topped 350 in Sunday attendance.

Many Christians came from the Bible Belt to work for DuPont, the chemical company headquartered in this Mid-Atlantic city. 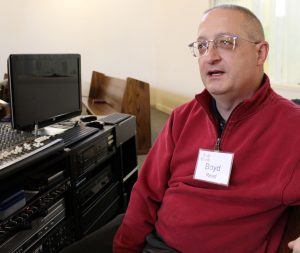 Those workers and their families formed the core of the congregation, which was active in mission works, from the Blue Hens for Christ campus ministry to a Bible college built in Ghana.

“When DuPont was moving people in and out of here, the congregation was quite large,” said Boyd Reed, 53, a data analytics architect with the company. “But there were a lot of layoffs with DuPont, and a lot of people left.”

Others retired and returned to hometowns in places such as Texas and Tennessee.

“We were a dying church.”

Those changes left an older, mostly White church of 80 to 100 people with an uncertain future. When preacher Brad Carman stepped aside because of a serious health issue, the 75-year-old congregation wasn’t sure it could afford to hire a new minister.

Doug Mattis, one of the Cedars church’s three elders, put it this way: “We were a dying church.”

Enter the First State Church of Christ, a predominantly Black congregation in this same Delaware city.

“We should just all get together.”

That body of believers started with a group meeting in a home’s basement about 14 years ago. Services later moved to an Elks Lodge. Finally, the church equipped a leased warehouse for worship.

The First State church was full of young families, but its minister, Domingo Reyes, felt its cramped space was hindering growth. 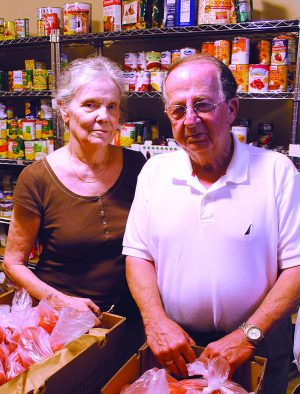 Sue Maynard, pictured with her husband, Ed, at the church food bank in 2013.

Reyes wondered if the Cedars church might be open to a building-sharing program whereby the First State church would pay rent and meet at a different time than the host congregation.

When Reyes stopped by the Cedars church to discuss the possibility, he met Ed Maynard, 77, whose wife, Sue Maynard, 83, organizes the congregation’s thriving food pantry ministry. The pantry serves hundreds of hungry families every Thursday night. It’s the largest such program in Delaware.

“If you meet Ed — from day one, he’s your best friend,” recalled Reyes, 45. “He’s a very social person and pretty much said, ‘We should all just get together.’”

While that didn’t happen immediately, a seed was planted.

At Ed Maynard’s invitation, Reyes and his wife, Crystal, volunteered with the pantry that night.

“We were blessed by it,” Reyes said. “We met with the elders and had a brief conversation, nothing too heavy. We decided to meet and have another conversation at a later time.”

A series of conversations resulted in a decision that — when the First State church’s lease expired this past June — the smaller body would begin meeting at 9 a.m. Sundays at the Cedars building.

The Cedars church would assemble at 11 a.m.

In between — at 10 a.m. — the bodies would join together for Bible study and get to know each other.

Reyes occasionally would preach for both groups.

“It just really felt right, like God was leading the steps to make it possible,” said Lisa Reed, Boyd’s wife and the Cedars church’s secretary. 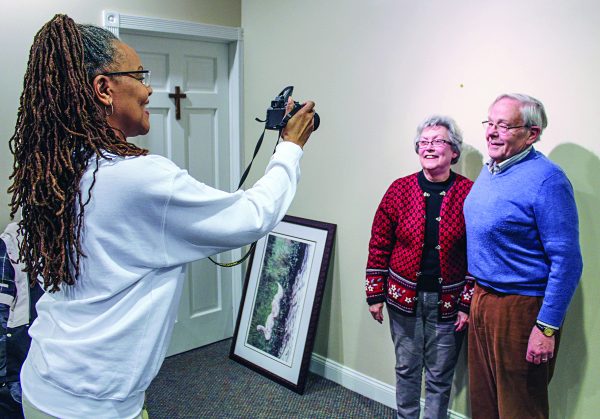 Yvette Curcio, who serves as the church photographer for the newly formed Greenbank congregation, snaps a directory photo of Ed and Brenda Jones.

Quickly, many church members — inspired by the love and zeal for Christ shared by both groups — pushed to worship together.

But the leaders felt a need to take their time.

“We wanted to make sure we were doing it right,” Cedars elder Jim Friederichsen said. “I think we had our first meeting in April, and we didn’t consummate (the merger) until the first of December. By and large, we moved steadily ahead.”

One point of discussion: What to call the new congregation?

Eventually, the groups chose “Greenbank Church of Christ” — a reference to the street on which the former Cedars building is located.

The Cedars and First State churches became one body as 2019 began.

Yesterday was a historic day at the Greenbank Church of Christ. We officially took on the name Greenbank COC, ordained…

Reyes was hired as the preacher. 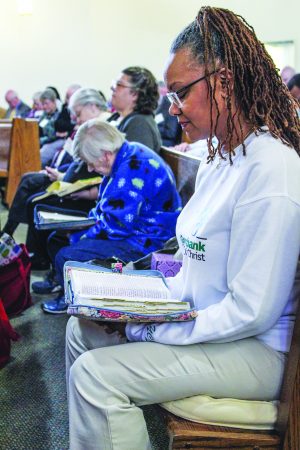 Yvette Curcio prays at the Greenbank Church of Christ.

“It couldn’t have been more obvious that we were supposed to come together,” Mattis said. “We needed a preacher, and they had a preacher. We needed someone to speak Spanish. Domingo speaks Spanish. They needed a building. Our building was feeling empty.

“It’s just beautiful now to see the children’s classes are populated with children,” he added. “We didn’t have any children at Cedars. We’re all old people with white hair. Our children were grown and gone.”

Meanwhile, the wisdom and experience of the former Cedars members is a blessing to those who had attended First State, said Darrin Anderson, a 45-year-old father of two.

“They had elders and deacons and a spiritual structure,” said Anderson, a former University of Delaware basketball star who directs the New Jersey YMCA State Alliance. “There’s some wisdom that’s there, some experience that we haven’t had.” 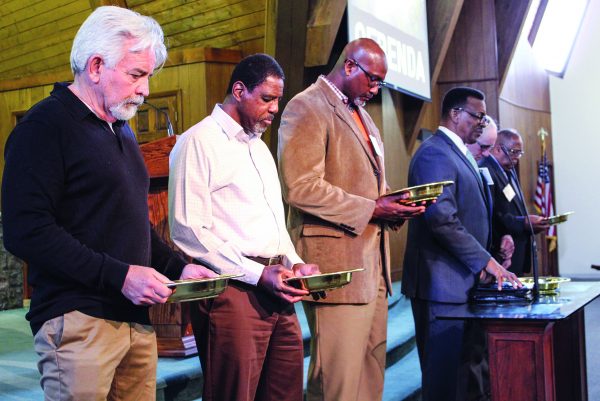 A bonus of the merger: For years, Spanish speakers — many of them immigrants from the Central American nation of Honduras — had made up roughly 20 percent of the Cedars church’s membership.

However, the congregation lacked a Spanish-speaking minister.

Reyes, the bilingual son of a Dominican Republic-born father and a Puerto Rican mother, has started an adult Bible class for Spanish speakers. 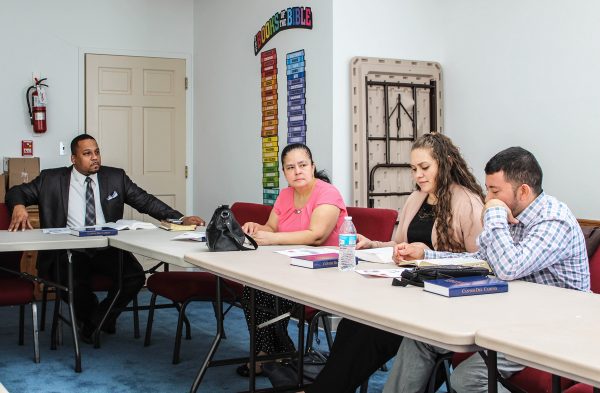 Minister Domingo Reyes, left, teaches a Bible class for Spanish speakers at the Greenbank church. He discusses the points he will cover in his sermon later that morning.

During the class, he goes over his planned sermon for that Sunday. He prepares PowerPoint slides in English and Spanish for the worship assembly. He preaches in English but frequently offers the invitation in both languages.

Related: When God comes with a loud thud

The adult class has inspired the Hispanic members — who previously only came to worship — to bring their children to Sunday school. The children understand Spanish and English. 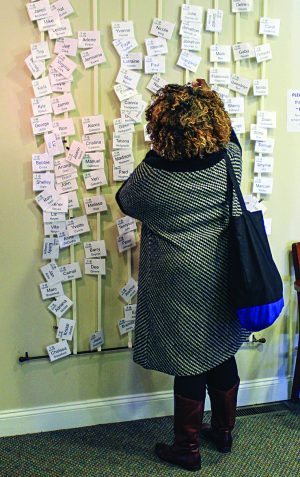 Angela Mitchell finds her name tag on a wall in the Greenbank Church of Christ’s foyer. The name tags help members of the newly merged church get to know each other.

“For me, it’s a joy to be here with the two groups of the church,” said Maria Aguilar, speaking in Spanish. “It feels more like family. God made all sorts of people, not just Black or White, and I’m happy because we’re all together.”

Already, the combined body has grown to Sunday attendance of more than 150.

The energy they felt in the Greenbank church drew new members Jonathan and Angela Mitchell and their three children.

“It seemed like everyone is so warm and friendly and getting to know each other, so it felt like a great time to jump in,” said Angela Mitchell, 35, whose family had been driving 45 minutes to worship with a different congregation.

“There are so many talents and so much knowledge in the congregation,” she added. “We’re really excited about the merger.” 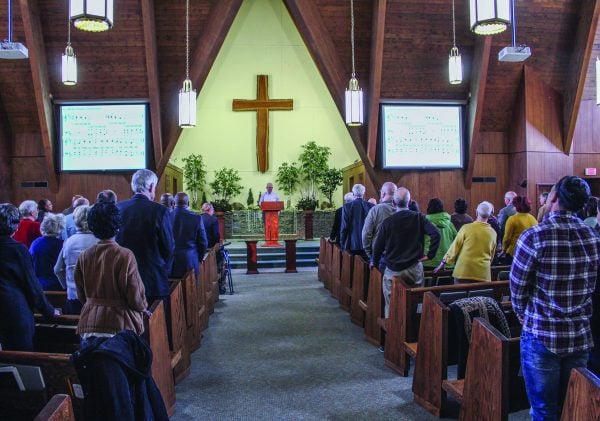 Rick Mickowski leads singing at the Greenbank Church of Christ in Wilmington, Del., on a recent Sunday morning. 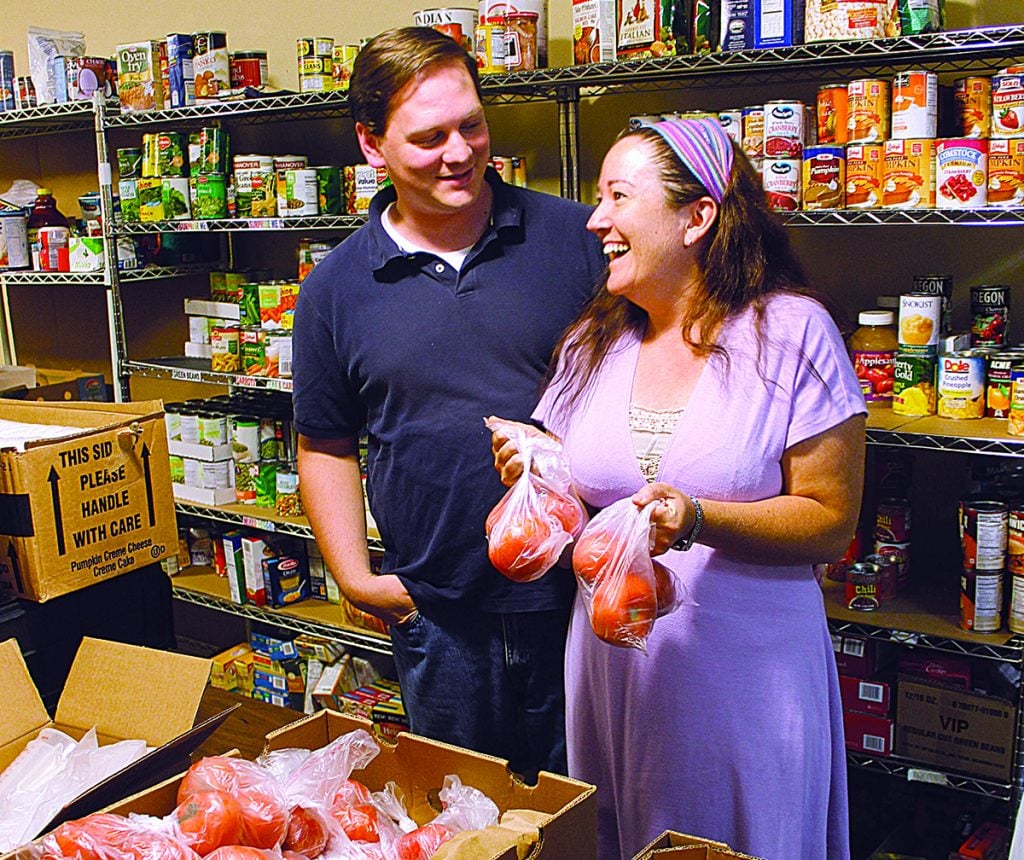 WILMINGTON, Del. — The Cedars Church of Christ found an…