Dan Coker, a longtime missionary and ministry trainer for Churches of Christ in Central and South America, died Wednesday night in Tyler, Texas. He was 82.

“Perhaps he was the most significant U.S. missionary to Spanish-speaking Latin America of all time in Churches of Christ,” said David Duncan, preaching minister for the Memorial Church of Christ in Houston, a congregation that supports missions across the region.

Brother Dan C. Coker a pioneer in the mission work to Latin America has gone with the Lord,What an amazing brother he…

Posted by International Center for Christian Leadership on Thursday, September 19, 2019

Coker preached in every Spanish-speaking nation in the Americas and served as dean and executive director of the Instituto Latinamericano de Estudios Biblicos (Latin American Institute of Biblical Studies) in Toluca, Mexico. For the past three years, Coker and his wife, Elise, lived in Tyler.

He earned his bachelor’s and master’s from Abilene Christian University in Texas and a doctorate in intercultural comparative education from the University of Florida.

After a tour in the Armed Forces, Dan Coker and his wife moved to Guatemala as part of a mission team, said Howard Norton, a former missionary to Brazil, former editor of The Christian Chronicle and longtime friend of the Cokers.

The Cokers later moved to neighboring Honduras as self-supporting missionaries. While there, “they used their nights and weekends to establish the first congregation of our brethren in that country,” Norton said.

The Cokers lived and worked in Mexico for two different tours of duty — one in Mexico City and the other in Toluca, Norton said. Between those tours, they served as missionaries in Montevideo, Uruguay. 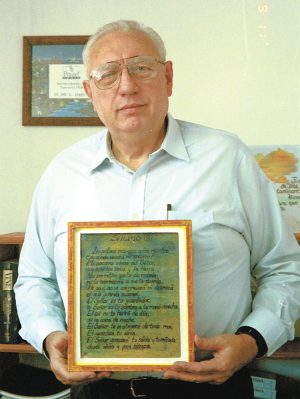 Dan Coker stands in his office in Toluca, Mexico, in 2001 with a copy of Psalm 121 made by one of his students.

He also served as a missions professor at Abilene Christian, where he trained missionaries to serve around the world.

For more than 30 years, he served as a director of the Pan American Lectureship, which brought members of Churches of Christ together in a different Latin American city each year. Reuel Lemmons, minister and editor of Firm Foundation, launched the event in 1963 to encourage fellowship and understanding among church members from the U.S. and Latin America. Coker attended the first Pan American Lectureship and spoke at many of the ones that followed.

“His talks at the Pan Am lecs were always a highlight for me,” said Erik Tryggestad, president and CEO of The Christian Chronicle, who attended the lectures in Toluca, Nicaragua and Costa Rica. “He gave a cultural history of whatever country we were in, and it always was insightful. He really understood the mindset of the people and delivered his talks in a way that was forthright and honest. It was easy to see why he was called the dean of Latin American missions.”

In 2018, the 53rd and final Pan American Lectureship took place aboard a cruise ship. Participants disembarked in Havana, Cuba, and shared a devotional with a Church of Christ there. Coker, who had spoken in Cuba previously, was unable to attend for health reasons.

“I should not impose on others anything that is not an understandable and demonstrable article of faith that comes by hearing the Word.”

Tryggestad interviewed Coker in 2001 for the Chronicle. Coker spoke about U.S. intervention in Central and South American politics over the past half-century and how Christians from the U.S. should respond when sharing the Gospel with their Latin American neighbors. He counseled against “attempting to defend the policies of the U.S. State Department in Latin America.” He also warned against “the tendency to join in criticizing the United States in an attempt to show oneself as objective and fair.”

In all things, Coker said, Christians should be honest to God and honest to one another.

He urged missionaries to shed their “cultural baggage” as they serve in Latin America and to “not build a system dependent on (U.S.) financing and presence.”

Norton said, “Dr. Dan Coker was an unforgettable, bigger-than-life man of God. He was blessed with a brilliant mind, a booming voice and a heart for the lost.

“Churches of Christ have lost one of the most effective missionaries of modern times and a scholar who used his knowledge of Latin America to further the cause of Christ and spread the good news of Jesus with special fervor in Mexico and Central and South America. We grieve our loss, but not as those who have no hope. Dan Coker fought the good fight, finished the course, and kept the faith.”

Featured photo (above): With the majestic Mayon Volcano as their backdrop,…