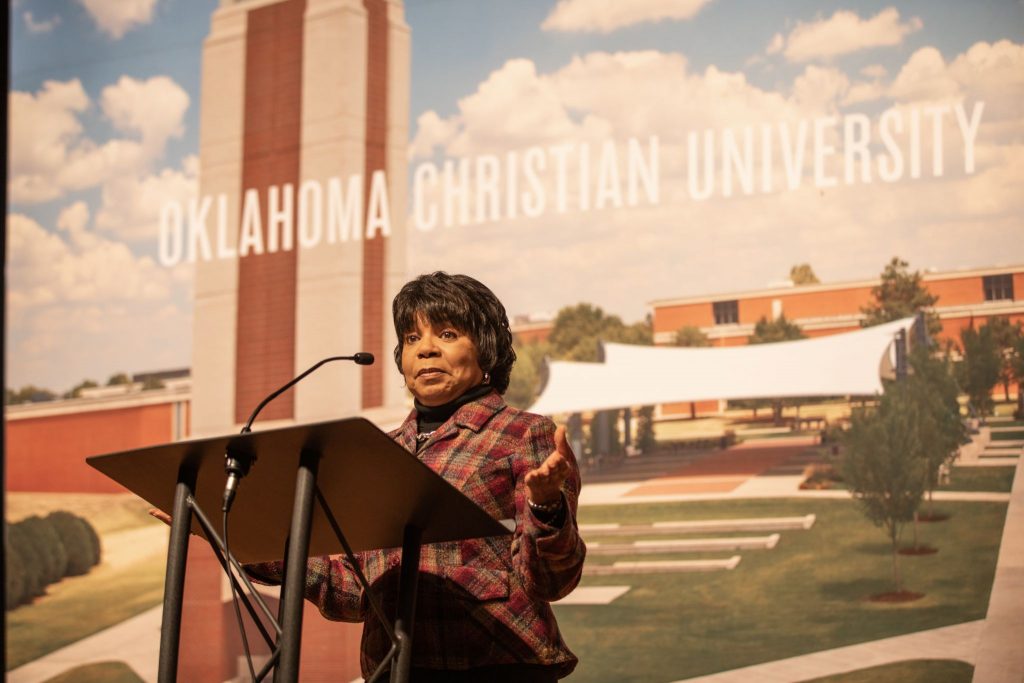 The truth of Brown v. Board of Education

OKLAHOMA CITY — You may think you know the story of Oliver Brown, the Black father in Topeka, Kan., who was the lead plaintiff in the landmark 1954 case Brown v. Board of Education.

Nearly seven decades ago, the welder-turned-preacher’s name was etched in history when the U.S. Supreme Court unanimously struck down the “separate but equal” doctrine. In the Brown v. Board decision, justices ruled state-imposed segregated schools were “inherently unequal” and must be abolished.

But much of what is reported about the lead plaintiff and his family is untrue, Cheryl Brown Henderson — the youngest of the late pastor’s three daughters — said this week at Oklahoma Christian University.

“Where Brown v. Board is concerned, the internet is not your friend,” Henderson said Monday night. “We’ve discovered that online there are all these stories about Brown that don’t even resemble the truth.” 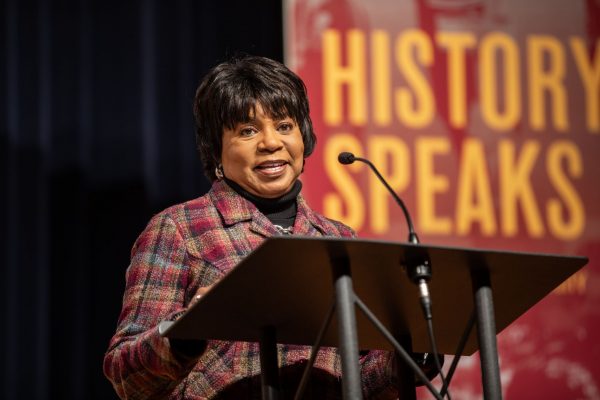 Cheryl Brown Henderson speaks Feb. 7 at Oklahoma Christian University in Oklahoma City. She is the youngest daughter of the late Rev. Oliver Brown, the lead plaintiff in a landmark school desegregation case.

“On one of the websites, it said that Oliver Brown came home from World War II incensed about fighting for freedom abroad and coming back and experiencing racial segregation,” Henderson told a crowd of about 850 students, faculty and community members.

“My father was never in the military,” she continued, drawing laughter from the audience. “He was born with an enlarged heart. He could not serve.”

Another site indicated that Brown was so incensed with segregated schools that he flew to New York and met with Thurgood Marshall, the NAACP attorney who later would become the Supreme Court’s first African American justice.

Still another myth: Brown — with a wife and three daughters — was chosen as the lead plaintiff “because of all the litigants, they were the only intact family,” Henderson said.

That’s not true either.

“Everybody was a mom and dad and children,” Henderson said of the other 12 plaintiffs in the federal lawsuit against Topeka public schools. 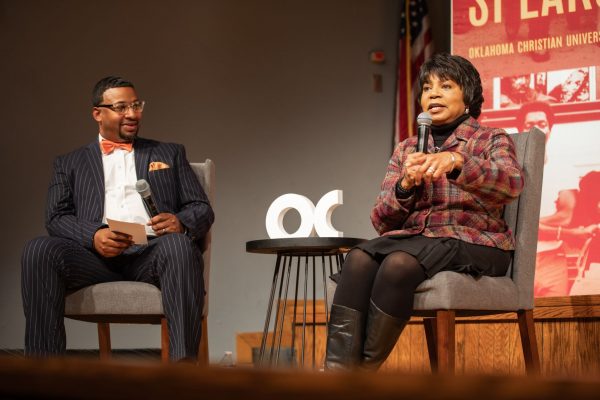 The role of faith

Coinciding with Black History Month, the History Speaks program each year brings civil rights leaders to Oklahoma Christian, which is associated with Churches of Christ.

“Oftentimes, when we think about history, we think about long ago, and we think about black-and-white pictures,” said Gary Jones, Oklahoma Christian’s assistant dean of students and director of diversity. “But we don’t realize that these things are just a generation away.”

The university’s president, John deSteiguer, said it’s important to “discuss real-world topics that are playing out in real time in our society because Jesus said that even though we are not of this world, we are in this world.

“We need to engage. We need to understand,” deSteiguer said. “We need to be better because God calls us to be better. And we need to do better when it comes to how we treat each other.”

Part of that engagement, he said, involves hearing “compelling and important” accounts of history from people who witnessed it — people such as Henderson.

As Henderson explained, a common belief is that Brown v. Board was all about one little girl: Brown’s 7-year-old daughter, Linda, who could not attend the White school near her house but had to walk several blocks to catch a bus to attend a Black school.

The idea is that Oliver Brown was angered that his daughter couldn’t enroll at the closer school and initiated the lawsuit.

In fact, the NAACP recruited Brown to join its lawsuit, Henderson said.

One Sunday morning in the summer of 1950, attorney Charles Scott Sr., Brown’s childhood friend, came to the family’s house after church. At the time, Brown was a welder studying to become a pastor. Henderson’s mother, Leola, was pregnant with her.

Leola would take Henderson’s two older sisters to New Mt. Zion Baptist Church. Oliver would go to St. John African Methodist Episcopal Church by himself. But the whole family was home in time for Scott’s visit that Sunday.

Oliver was a huge fan of Joe Louis — the longtime world heavyweight champion nicknamed the “Brown Bomber” — and tried boxing before going into ministry.

After Oliver was knocked out for the first time, he “had an epiphany there on the mat,” his daughter joked.

He turned to theology.

Leola later became a “Metho-Baptist,” her daughter quipped, and joined Oliver’s church when he became pastor of St. Mark African Methodist Episcopal Church in Topeka, where he served from 1953 to 1959. From 1959 until a heart attack claimed his life at age 42 in 1961, he ministered at the Benton Avenue AME Church in Springfield, Mo.

The Sunday of Scott’s visit, the attorney asked Oliver if he’d be willing to be a part of the Topeka lawsuit the NAACP was putting together.

Nine mothers of elementary-age children had already agreed to join the effort. Oliver asked if the legal team was recruiting any other fathers. Scott indicated that they were.

Oliver agreed to think about it, and his wife helped persuade him, Henderson said.

“I think his faith played a role in his willingness to say yes,” his daughter said in an interview. “It’s my understanding from my mom that the conversation did center around, ‘You’re becoming a pastor and taking on a leadership role … and this is something that a faithful person would do.’” 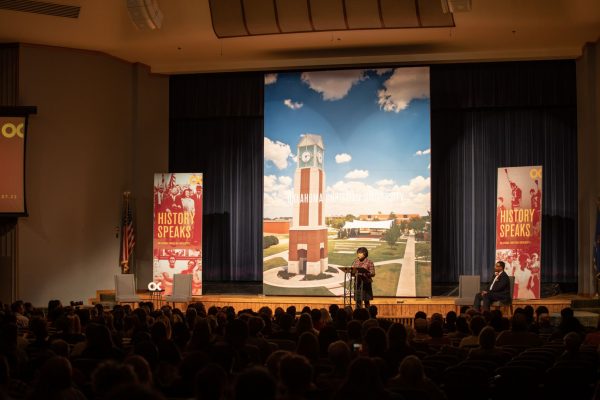 ‘The principle of the thing’

Before Brown v. Board, Kansas was the battleground for nearly a dozen other school desegregation cases, starting with Tinnon v. Ottawa in 1881.

Those cases helped pave the way for the landmark lawsuit, Henderson said.

When Brown v. Board was filed, junior high and high schools in Topeka were integrated for academic studies. But extracurricular activities, from football and basketball teams to cheerleading squads, were segregated.

Topeka’s four Black elementary schools were “beautiful brick buildings,” Henderson said, filled with African American teachers who “held more advanced degrees than their White counterparts because there was no outlet for that master’s or post-master’s work other than that classroom.”

The other 12 plaintiffs were women, including Darlene Brown, who alphabetically should have been the lead plaintiff. Contrary to what Scott told Oliver Brown initially, no other fathers were added to the lawsuit, which was filed on Feb. 28, 1951.

“We do have to face the reality that my dad’s gender is probably what garnered him his place in history,” Henderson said.

When the Supreme Court agreed to hear Brown v. Board, the Kansas lawsuit was consolidated with four other school desegregation cases — from Delaware, the District of Columbia, South Carolina and Virginia.

In all, there were more than 200 plaintiffs. So the decision wasn’t just about one little girl.

Linda Brown, Henderson’s sister who became the face of the lawsuit in part because of a Life magazine article, died at age 75 in 2018.

Henderson’s mother, Leola Brown Montgomery, is still living. She turned 100 in May 2021 and was able to attend a grand opening three months later for Oliver Brown Elementary School, a public school in Manhattan, Kansas, named after her late husband.

Montgomery told the local newspaper, The Mercury, that her late husband would be “thrilled beyond belief” to have a school named in his honor.

“He would’ve wondered if he was worthy of it,” she said.

In her visit to Oklahoma Christian, Henderson noted that Brown v. Board was a catalyst for the civil rights movement.

Civil rights icon Martin Luther King Jr.’s first marches on Washington in the late 1950s were to urge the federal government to follow through on the decision’s call for integrated schools.

King had an activist theology, she said, “knowing that, ‘What good is it to save souls if you’re going to hate your fellow man?’”

“So I implore all of you in this room,” she told the Christian audience, “when injustice rears its ugly head, the only reaction should be showing up, standing up and speaking up.” 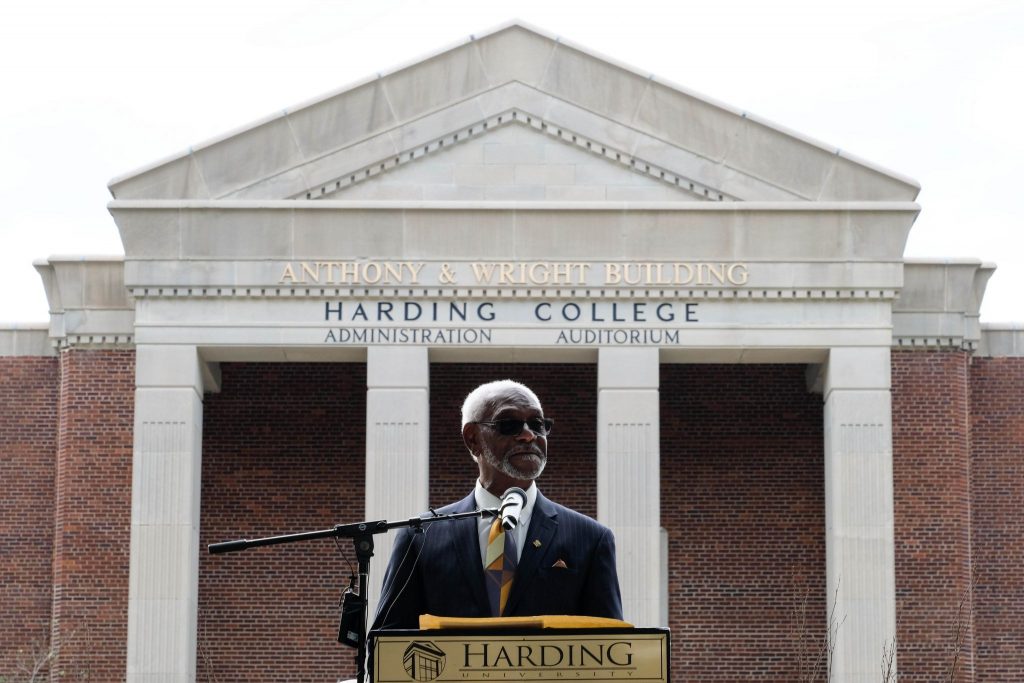