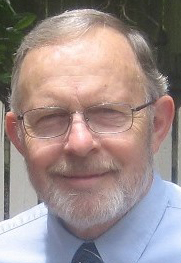 His greatest joys in life included serving God, loving his family, teaching, traveling and photography. He took outstanding pictures wherever he traveled.

After earning a bachelor’s degree in education and a master’s degree in journalism from Central Michigan University, he taught high school for 32 years in suburban Detroit. He spent the last 10 years as a substitute teacher at Franklin High School in Tennessee, where he received the “Sub of the Year” award for 2014-2015. His colleagues and students recognized him as one of the most outstanding teachers they have ever known, and he had a powerful impact.

He is survived by his “Best Girl” Joy, loving wife of 45 years, and his three children: Chad (Betsy) Emerson, Amy (Ed) Baynes and Brett (April) Emerson. He considered them to be his most important legacy.

He also took great delight in his 11 grandchildren, ages 2 to 13. He loved being silly with all of them, and one of the regrets born from his terminal illness was that he would miss seeing them grow up.

Darrel and Joy were members of the Livonia Church of Christ in Michigan for 26 years. He served as a teacher, deacon, Bible school director and elder while there.

Since moving to Franklin in 2003, they have attended both the Fourth Avenue and Otter Creek Churches of Christ. At Otter Creek, he was involved in leading the men’s ministry, serving on the missions committee, as well as ministering to the homeless and supporting young people in world missions.

One of his final tasks was the writing of his book, “The Final Battle: A Believer’s War Against Cancer,” which can be purchased on Lulu.com. In it, he chronicled his life with cancer and his journey through to his death, and the book is dedicated to his beloved wife Joy, whom he considered to be his rock throughout his battle.

His Celebration of Life service was held at the Otter Creek church on Sunday, June 7. Donations in his memory may be made to Otter Creek Church of Christ, 409 Franklin Rd, Brentwood, TN 37027, with the memo “Teen Service Scholarships,” which will honor his passion for world missions.

As one of his former students said so profoundly, “Mr. Emerson, you are loved, and your life is celebrated.”