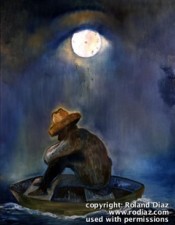 Cuban artist: All of life is God’s canvas

Erik Tryggestad
Dallas — In Rolando Diaz’s painting “Ahora que?” (“What now?) a man in a wide-brimmed hat sits, head bowed, in a tiny boat somewhere between Cuba and the United States.
The moon shines overhead. On closer inspection, it becomes an eye — and a clock. Like tears, numbers drip from the clock’s face into the water below.
“Time stood still for those people,” said Diaz, a member of the Preston Road church in Dallas and a sought-after visual artist. Though many Americans remember the saga of Elian Gonzalez, “there are so many Cubans who we’re never going to know about, who have lost their lives on that 90-mile trip.”
Diaz returned to Cuba in 2003, nearly 40 years after he and his family fled the island nation.
Austin-based filmmaker Harry Lynch and a small crew followed Diaz as he visited his childhood home and talked with prominent Cuban artists. The resulting documentary, “Recapturing Cuba,” won two gold medals at the 2008 Park City Film Music Festival in Utah.
Diaz described Cuba as “a combination of New Orleans and Europe,” filled with Spanish and African influences. The 50-year-old artist also called it a place of “unfinished memories.”
“The mind is like a camera,” said Diaz, who was 7 when he left Cuba. “Your eye connects with something — a ceramic tile. It opens up a memory you haven’t thought about in 40 years.”
Diaz’s early life was a story of riches to rags. His father owned a pastry factory in Santiago de Las Vegas, 12 miles south of Havana, when Fidel Castro came to power in 1959. The family attended a Church of Christ that met in secret after the revolution.
In 1964 the Diazes boarded a boat, a 50-footer named Bonanza, bound for Key West. The government let them go — after they signed over all their possessions “for the betterment of the people.”
Diaz’s father died six months later, as the family was settling in Miami. Diaz, his mother and his brother made regular trips to Biscayne Boulevard, where the U.S. government provided scores of Cuban immigrants with medical, dental and other services in a building later dubbed the Freedom Tower.
“I still remember hopping on a bus with my mother and going downtown … to get our shots and to get our cheese,” he said.
The family attended the Central church, where Diaz learned about a Christian school in Texas. He worked his way through Abilene Christian University, graduating with a degree in fine art in the early 1980s.
He worked for an airline in Miami and an investment company in Amarillo, Texas, before landing a graphic
design job in Dallas. He left that job about 15 years ago to devote full attention to his art.
His faith influences his work, though he has no interest in being “classified as a cliche Christian artist,” he said. His paintings include themes ranging from sensual to sublime.
“Artists connect … with what everyone is feeling, but they don’t want to talk about — or sometimes even understand how to talk about,” he said.
Now even Diaz can’t believe a kid who grew up on government cheese can sell paintings for thousands of dollars.
“God sometimes has amazing plans for us that we don’t even understand,” he said.
Diaz has volunteered with Central Dallas Ministries, a church-supported organization that serves the needy.  He laments that many Americans live “a Disneyland lifestyle … unless you take the time to dive into the lives of people who are suffering.”
Scott Sager, senior minister for the Preston Road church, calls Diaz the congregation’s “missionary to the arts.”
“Ro always enters the room late and excited,” Sager said. “He has just met someone amazing, done something amazing or is about to go somewhere he is excited about. But what excites Ro most is life — people, their stories, their talents, gifts and culture.”
Diaz has painted murals in Kenya and will do another as part of a mission to Brazil this summer. He has a special affinity for people forced from their homes by those who seek power, “whether it’s Cuba, whether it’s Africa — anyone who’s ever gone through an experience of migration,” he said.
For Diaz, “all of life is God’s canvas,” Sager said. “He is amazed by what God paints for us.” 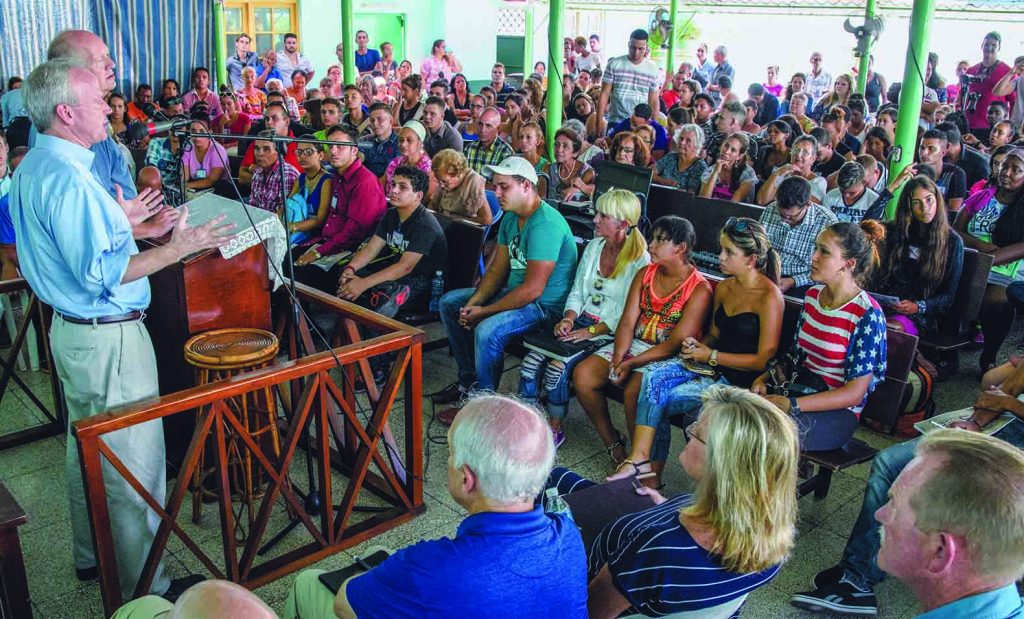 MATANZAS, Cuba — The Good News Singers, an a cappella worship…