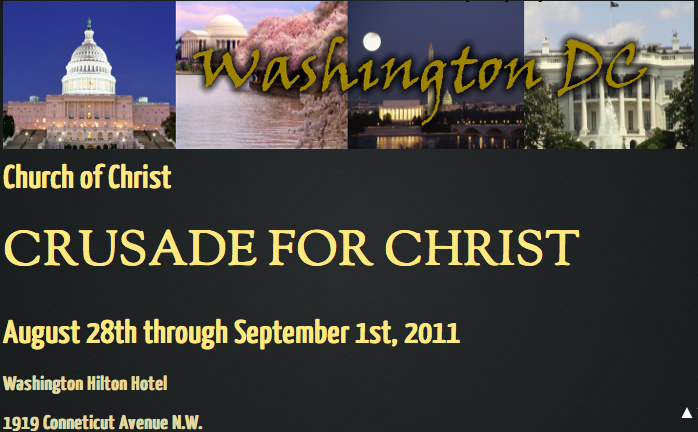 Crusade for Christ in Washington, D.C., goes on despite Hurricane Irene

Christian Chronicle correspondent Hamil R. Harris reports from the scene of the Crusade for Christ in Washington, D.C.:

WASHINGTON — Hurricane Irene forced the cancelation of church services across the region. But at the Washington Hilton, hundreds of people came together to worship during the Crusade for Christ.
Organizers said about 2,000 people were scheduled to come to D.C. for five days of door knocking and revivals. According to Ed Maxwell, minister of the Suitland Road Church of Christ in Suitland, Md., and a local organizer of the event, busloads of people continued to arrive Saturday, despite the hurricane threat. Many people were yet to come because their flights were delayed or canceled, Maxwell said.
“This crusade effort was made possible because of the sacrifice of so many people who save up their vacation time each year so that they can knock on doors and spread the word of the Lord,” Maxwell told The Christian Chronicle.
When the storm passed through the area, about 600 people were singing “I am a hard-fighting soldier on the battle field” during the crusade’s opening banquet. John Dansby, the crusade’s chief of staff and minister of the Russell Road Church of Christ in Shreveport, La., smiled and told the gathering, “I was a meteorologist in the Air Force and from the beginning I wasn’t worried.”
On Saturday afternoon, crusade volunteers distributed 25,000 pounds of food to the needy at the 13th Street Church of Christ in Washington to people who came out and accepted donations in the rain.
Graylon Freeman, minister of the 13th Street congregation, said the food giveaway was important. “We wanted people to know that the church is concerned about people’s needs,” Freeman said.

Harris is a reporter with the Washington Post and a deacon for the University Park Church of Christ in Hyattsville, Md.
Read the Chronicle’s 2007 feature on the Crusade for Christ in Tampa, Fla. See my July 2010 Inside Story column on my visit to the 13th Street church in Washington.