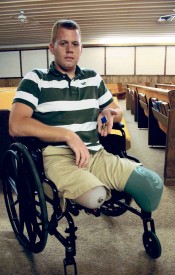 Church member from Missouri — a 22-year-old Army infantryman — relies on his faith and his family after losing both legs in his second tour of duty in Iraq.

Bobby Ross Jr.
Editor-in-Chief
CLINTON, Mo. — By early May, when he set out on a mission south of Baghdad, Army Spc. Chris Rutter had become accustomed to the barrage of attacks from the insurgency.
In late January, while on foot patrol, the 22-year-old infantryman’s squad leader, Staff Sgt. Michael Durbin, had spotted something suspicious and ordered the seven soldiers behind him to hold up. From 10 to 15 feet behind, Rutter watched as the 26-year-old Texan pulled back brush on the side of the road.
“I-E-D!” Durbin yelled. The “D” in improvised explosive device didn’t even make it out of his mouth before the bomb exploded and killed him.
Now, more than three months later, Rutter — a faithful church member and son of a preacher from this small town in Missouri’s Golden Valley — was driving the lead Humvee in a six-vehicle Army caravan.
The group had left its base about 11 a.m. Baghdad time that Sunday — 2 a.m. Central time — and was about five miles from its destination when the route took the caravan off paved roads.
Turning onto a gravel road was always dangerous because it didn’t take much for an insurgent to dig a hole in a road and bury a bomb. But this is what Rutter had signed up to do — to drive down the unknown road, to defend freedom back home.
BIBLES BOWLS AND ROTC
For Rutter, home was Clinton — a town of 9,400 about 75 miles southeast of Kansas City.
An only child, he grew up in a military family. Born at Whiteman Air Force Base in Missouri, he lived in the Clinton area from age 5 until he was 11. Then his family spent three years in Guam and North Dakota.
Nolan and Ann Rutter and their son returned to Clinton in 1998 when Nolan retired after 21 years in the Air Force. Nolan worked at an oil company until the Clinton Church of Christ hired him as minister in 2001.
From Bible Bowls to youth activities, Chris stayed active at church throughout his childhood. At Clinton High School, just across the street from the church, he volunteered with a group called START — Students Together Achieving a Responsible Task — and advanced through the Army’s Junior Reserve Officer Training Program.
The fall of his senior year, terrorists crashed hijacked airplanes into the World Trade Center and the Pentagon. By then, Rutter had already decided to join the Army.
Making mostly A’s and B’s in high school, he earned an ROTC scholarship valued at $120,000 to attend Ohio State University. But a glitch in his medical records — which involved questions about a possible respiratory airway distress disorder — caused him to lose the scholarship. By the time the error was corrected, the scholarship had been given to someone else.
Rather than wait a year to re-apply for the scholarship, he enlisted in the Army and headed to training at Fort Benning, Ga., on Jan. 21, 2003 — his 19th birthday.
About halfway through the 16 weeks of training, the U.S. attacked Iraq — and Rutter learned his next assignment would be the Middle East.
In June 2003, he began his first tour of duty in Iraq.
“I remember the first time we got into an ambush,” he said. “We took a left, and as soon as all three vehicles got on the road, we started getting shot at. It hit me all of a sudden that these aren’t the blanks I was training with just a few weeks ago.”
After arriving in Iraq, Rutter kept in touch with Jim Braley, minister of the Bonner Springs, Kan., church. A former minister at Clinton, Braley had baptized Rutter when he was 9. Braley gave Rutter’s e-mail address to Amber McDaniel, a church member who, like Chris, was 19. The minister encouraged her to contact Rutter and send him a care package.
The two e-mailed each other and talked a few times by Webcam. A romance blossomed, and they met for the first time when Rutter returned home on leave in time for a Valentine’s Day party in 2004 at the Bonner Springs church. They married that August.
When Rutter left Iraq the first time, assailants popping out of buildings with AK-47 assault rifles seemed to be the biggest concern, he said. When he returned for his second tour in October 2005, insurgents’ tactics had evolved, making buried mortar rounds and car bombs much more of a concern.

‘DON’T WORRY ABOUT ME’
That Sunday in early May — five months ago — all six vehicles had made the left turn onto the gravel road when Rutter heard the ear-piercing explosion.
A massive wave of heat moved through the Humvee. But for a moment, it seemed like everything was fine. Rutter still had both hands on the steering wheel. The vehicle kept moving.
The platoon leader in the front passenger seat asked if everybody was OK. The radio operator in the back started to report that an IED had hit the Humvee but that no one was hurt. But then pain coursed through Rutter’s body, and he let out an incredible scream.
The squad leader kept telling him to stop the vehicle. But when Rutter pushed the brakes — or thought he pushed the brakes — nothing happened.
Finally, he shifted into neutral, skimmed a cinderblock wall beside the road, and the smoldering Humvee came to a stop.
The bomb had blasted an 18-inch hole in the vehicle’s side, extending from Rutter’s waist to his armpit. It blew off both the driver’s pedals and peeled off the dashboard. Worst of all, it had claimed both of Rutter’s legs.
At Chris and Amber’s Fort Campbell, Ky., home, the telephone rang about 6:45 a.m. that Sunday — 3:45 p.m. Baghdad time — with an Army official reporting the terrible news.
“I’m OK. Don’t worry about me,” Rutter kept telling Amber when he talked with her by telephone later that day.
A shaken Amber called to tell his parents the news. Despite the shock, Nolan taught Bible class and preached that Sunday morning, as always. God’s work must go on, he said as he tried to remain strong.
Within days, Rutter was flown to Walter Reed Army Medical Center in Washington, D.C., to undergo months of surgeries and physical therapy.
With his left leg amputated 4 inches below the knee and his right leg 4 inches above the knee, Rutter was fitted with prosthetic legs in June.
Mostly, he bottled up his emotions. But sometimes, late at night, with just his wife or immediate family in the room, he let his tears flow.
Amber struggled, too.
“When it first happened, I kept questioning, ‘Why would God do this?’” she said. “But then I knew God wanted him to come home” before something worse happened.
A HERO’S WELCOME
Through it all, Rutter and his family turned to their faith to help them overcome the ordeal.
“If I didn’t have that background and assurance, I don’t know if I would have been able to handle it,” he said.
In late July, President Bush came to the hospital and personally presented Rutter and four other soldiers with Purple Hearts.
Bush put his arm around Rutter and asked him about his therapy. He kissed Amber and told her he’d be praying for them. The president complimented the star-spangled cover on Rutter’s right prosthetic.
In mid-August, Rutter took a two-week convalescent leave from the hospital. The Bonner Springs church hosted a welcome-home reception for him and Amber. And more than 400 former classmates, veterans and Clinton residents turned out for a red, white and blue “Hometown Hero” party celebrating his first trip home since the attack.
“We pulled up in the parking lot,” Rutter recalled, “and there were 30 or 40 people out there with full-size American flags waving them. It was a little overwhelming, just looking across the crowd, picking out the faces.”

NO REGRETS
During his visit home, Rutter figured out a way to drive a car and operate a riding lawn mower.
He and Amber bought a 3.5-acre lot where they plan to build a home just down the road from his parents. Rutter plans to take college courses and perhaps pursue a career in finance or political science. At every opportunity, he hopes to deliver motivational speeches.
His physical therapy, which for double amputees generally requires a 12- to 18-month stay at Walter Reed, is proceeding much more quickly. By November, he could go home. At the same time, he and Amber are training to ride hand-cranked bicycles in the New York City Marathon on Nov. 5.
Braley, the Bonner Springs minister, worshipped with the couple and spent an entire Sunday with them recently in Washington.
“He’s remarkable. He really is,” Braley said of Rutter. “Unless he’s the best of actors, he’s handling his disability in a remarkable way.”
For his part, Rutter said he has no regrets. Americans, he said, have been fighting for democracy since 1776.
“Everybody knew signing up for the job that we were the first ones in,” he said. “We were the ones who would drive down the road that nobody’s been on.”