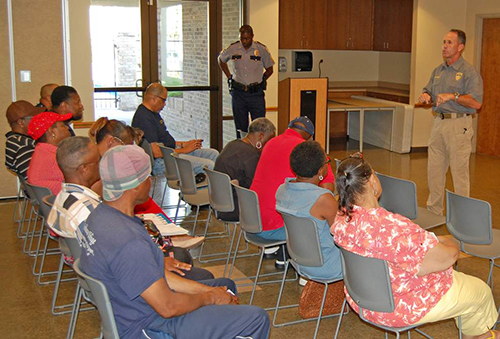 Building bonds between cops and ministers

Laura Akins
The Baton Rouge Police Department in Louisiana led a six-week “Cops and Clergy” training in an effort to educate and build positive relationships between police officers and faith leaders.

Wongchin L. Viltz, minister for the Hollywood Street Church of Christ, said the class was an “eye-opener.”

“It changed my whole paradigm of the police,” Viltz said. “There is a cloud over our nation concerning the police — a negative cloud.

“So many times we criticize the police and, as we learned in the training, when you look at the news clippings for those few seconds, you draw a conclusion from that, and sometimes — most of the time — it is the wrong conclusions,” Viltz said. “I appreciate the police department so much more than I did before.”

Read the full story as reported by The Acadian Advocate in Louisiana.