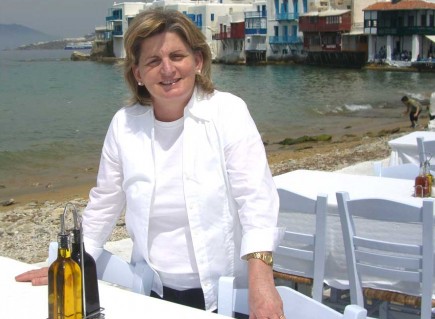 Joy McMillon
When she was 8 years old, Eleni Melirrytos spent a summer with her aunt in a small village, just west of the ancient Greek city of Corinth.
Young Eleni was mesmerized by the delightful smells in the 100-year-old house, built by her great-grandfather, a Greek Orthodox priest. She watched in amazement as her aunt took raw milk and turned it into creamy cheese.
“One day I stole the milk, took it to the basement and tried to do what I had seen her do,” Melirrytos confessed.
When she presented the newly made cheese to the family, her aunt and grandmother were amazed. “You did it, Eleni!” they said.
Now 49, Melirrytos, a minister’s wife and member of the Omonia Church of Christ in Athens, uses her passion for cooking as part of her ministry. From Greece to Africa and from Sri Lanka to the United States, her cookery and hospitality have blessed thousands, friends said.
“Whether she is preparing a pork loin stuffed with herbs and cheese for a church brunch or a garlic, rosemary crust lamb for an intimate birthday celebration …  her creations tantalize the palate, nourish the body and warm the heart,” said Theresa Mulieris, an office manager at the U.S. Embassy in Athens.
But preparing fresh, tantalizing dishes is only part of Melirrytos’ ministry, said Barbara Fox, business manager of the Hillsboro church in Nashville, Tenn., which oversees the Melirrytos’ work.
“There’s an aura about her of love,” Fox said. “Her mantra, which she believes and practices, is that the fellowship around the table creates a connection that can’t be formed any other way.”
HOT MEALS FOR LOST SOULS
Melirrytos didn’t develop her ministry of “table fellowship” in picturesque Glyfada, the seaside Athens suburb she and her husband, Alexander, call home.
The idea had its genesis in West Monroe, La., where the couple enrolled in the White’s Ferry Road School of Biblical Studies in 1987. Night after night, as friends and neighbors came together for a meal, Melirrytos began to realize that something much deeper than eating was happening around the table.
“We had nothing in common.  We were Greeks, spoke funny and looked different. But the food just connected all of us — no matter what our backgrounds were,” Melirrytos said.
When she saw the joy and bonding taking place, she realized that God was using her cooking to create community.
After graduation in 1990, the couple returned to Greece. For the past 20 years they have been part of a ministry team at the Omonia church that includes Dino and Debbie Roussos.
Athens is a cultural crossroads — home to immigrants from across Europe, Africa and Asia. Melirrytos cooks hot meals for visitors who come through the church’s doors, hungry and alone. She treats the meals as if she were cooking for her own family, she said. Many visitors have stayed to be taught the gospel and to be baptized.
“God’s spirit is working in her and giving her the ability to use her gifts to reach the lost,” said Lee Burgess, a member of the Smyrna, Tenn., church and a close friend.
SERVING LOVE, ACCEPTANCE
In 2000 the Melirrytoses traveled to Nashville on sabbatical. Their small rented house became a nucleus of food and love.
Hauling her pots, pans and ingredients, she spoke to women’s Bible classes around Nashville.
Afterward, the women cooked and ate together.
“It’s an experience to be around her for a meal,” said Fox, who has known Melirrytos for 10 years. “She can feed 200 people and make it look like it’s as easy as pie. Everybody gets in the kitchen helping her, and they will be laughing and having a wonderful time.”
While in Nashville, she appeared on the “Talk of the Town,” a local television show, demonstrating her recipes and talking about Greek culture.
“It was intimidating,” Melirrytos said, “but it was an opportunity for me to witness for God.”
Frequent requests for her recipes prompted Melirrytos to publish calendars in 2007 and 2008, featuring scenes from Greece and her favorite recipes. A 2010 calendar will be published next month. She’s also written a book about cooking and is looking for a publisher.
Melirrytos and her husband have served as “first responders” for Nashville-based Healing Hands International, a relief and shipping ministry. The couple helped assess needs and render aid after the 2004 tsunami in Asia and a 2008 earthquake in Greece.
Last year the ministry sent her to Maiduguri, Nigeria, where she and five other women taught women, some of them Muslims, how to cure and preserve meats, fruits and vegetables.
“Her ministry … is especially effective with many socio-religious ethnic groups” Goolsby said. “She’s willing to humbly serve and communicate love in places like hot, often primitive kitchens.”
Melirrytos said she plans to continue using the skills she began developing in her aunt’s home to bring food and hospitality to those in need.
Using her talents to communicate God’s love gives her zeal.
“Sometimes food is attractive, but I think the love and the acceptance that is communicated is so powerful,” she said. “People want food, but people can get food anywhere. It’s what comes with the food that people really want.”
FIND HER RECIPES at cookwitheleni.com.