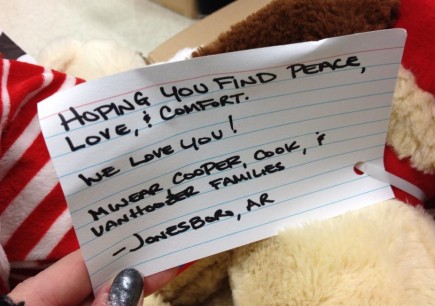 Congregation 'in shock' as it plans candlelight vigil and looks to 'pick up the pieces' in its grief-stricken community.

Bobby Ross Jr.
A teacher who attends the Danbury Church of Christ in Connecticut survived the Sandy Hook Elementary School massacre in which 20 students and six school employees died.
Minister Doug Vile identified the teacher as Robin Walker.
“She’s a special education teacher and was in a reading class,” Vile told The Christian Chronicle. “She huddled kids in a corner and read stories to them while the shooting was going on. She kept them safe and together and calm until the police came.
“Bless her heart, she loves those kids,” he added.
On the Sunday after the Dec. 14 attack, the 100-member congregation conducted a special “lament service” focused on Scripture and prayer. The church is about eight miles northwest of the Newtown, Conn., school.

“The mood was obviously very somber,” said deacon Rob Melillo, who has a daughter, Kaley, 7, the same age as the children who died. “In reality, everyone is just still in a state of shock.”
Amid that shock, Danbury church leaders voiced appreciation for the hundreds of fellow Christians across the nation who called and e-mailed after the shooting.
“We’re just thankful for all the love and support that have been expressed,” Vile said.
At press time, the church was making plans for a candlelight vigil to pray and remember the victims.
“We haven’t figured out what our role is going to be in helping the community get back on its feet,” the minister said. “When the national emphasis goes on to someplace else, we’re going to be here to pick up the pieces.”
Read Vile’s reflections on the tragedy and look for additional coverage in the next print edition of the Chronicle.