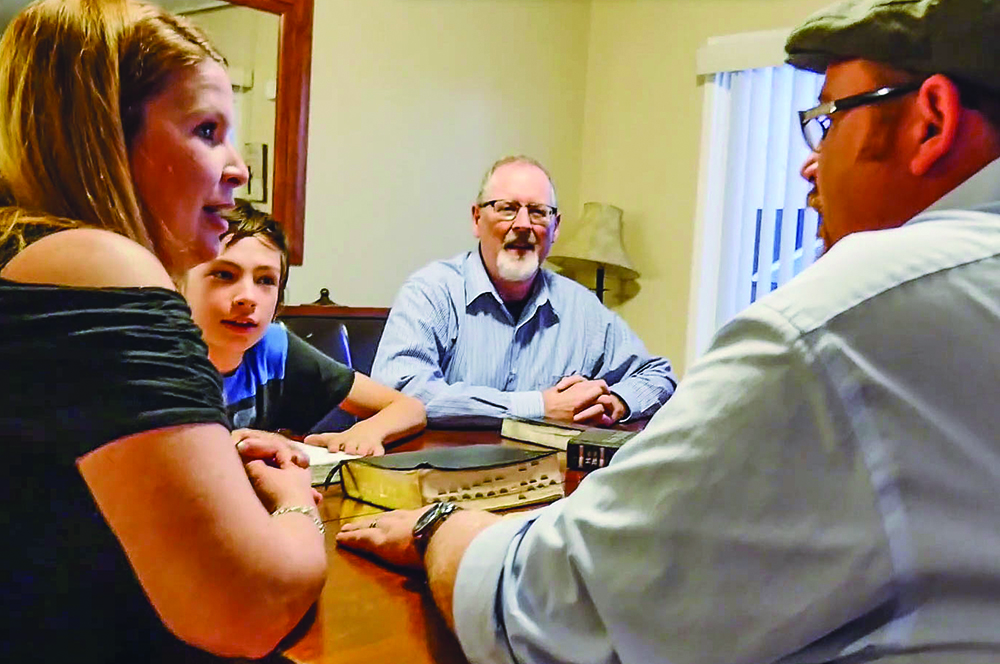 TORRANCE, Calif. — When EPIC Church launches in this Los Angeles-area city of 150,000 souls in August, it won’t meet in a building with wooden pews or a steeple.

Rather, church planters hope to connect with postmodern seekers by conducting services in a movie theater in one of America’s largest shopping malls — perhaps while the expected summer blockbuster “Ben-Hur” plays next door.

In future stories, The Christian Chronicle will explore the pros and cons of various approaches to reaching a changing society with a changeless message — from multisite church models to discipling focused on small-group house churches.“What better place to tell the story of restoration than the temple of our culture?” said lead planter Matt Raines, 38, who previously served as senior minister for the Chula Vista Church of Christ near San Diego.

“It’s the Agora — the marketplace of this little part of the world,” added fellow planter Jeff Brimberry, 23, who grew up in the Westover Hills Church of Christ in Austin, Texas, where his father, Don, serves as an elder.

EPIC — sponsored by Kairos, a church-planting ministry associated with Churches of Christ — will emphasize the importance of baptism and celebrate the Lord’s Supper weekly.

But even though the church planters stress their love and appreciation for their heritage, they don’t intend to “franchise” a traditional Church of Christ. They must, as they see it, be open to new approaches to reach a new generation with the good news of Jesus. 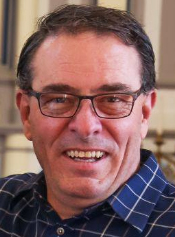 Scott Lambert“It takes a kingdom to reach the lost,” said Raines, whose family worships with the Hilltop Community Church of Christ in El Segundo, north of Torrance, while developing EPIC Church. “Our guiding ethic is to do what makes sense in our West Coast context. I hope our way doesn’t feel like an indictment to traditional churches.”

The new church will minister to people to whom existing congregations have difficulty relating, said Scott Lambert, national network director for Kairos and an elder of the Hilltop Community church.

EPIC is an acronym that stands for “experiencing” the story of restoration, “participating” in missional communities, “inspiring” personal and community transformation and “cultivating” a church-planting movement.

Unlike a more conventional name — such as one tied to a street or geographic location — EPIC reflects the true heart of the church, said Matt Raines’ wife, Melissa, whose family moved to this Pacific Coast city last summer to begin planting seeds for the new congregation.

“If your name doesn’t say something about you,” the 38-year-old mother of three said, “I think a lot of people feel like there is some disconnectedness.” 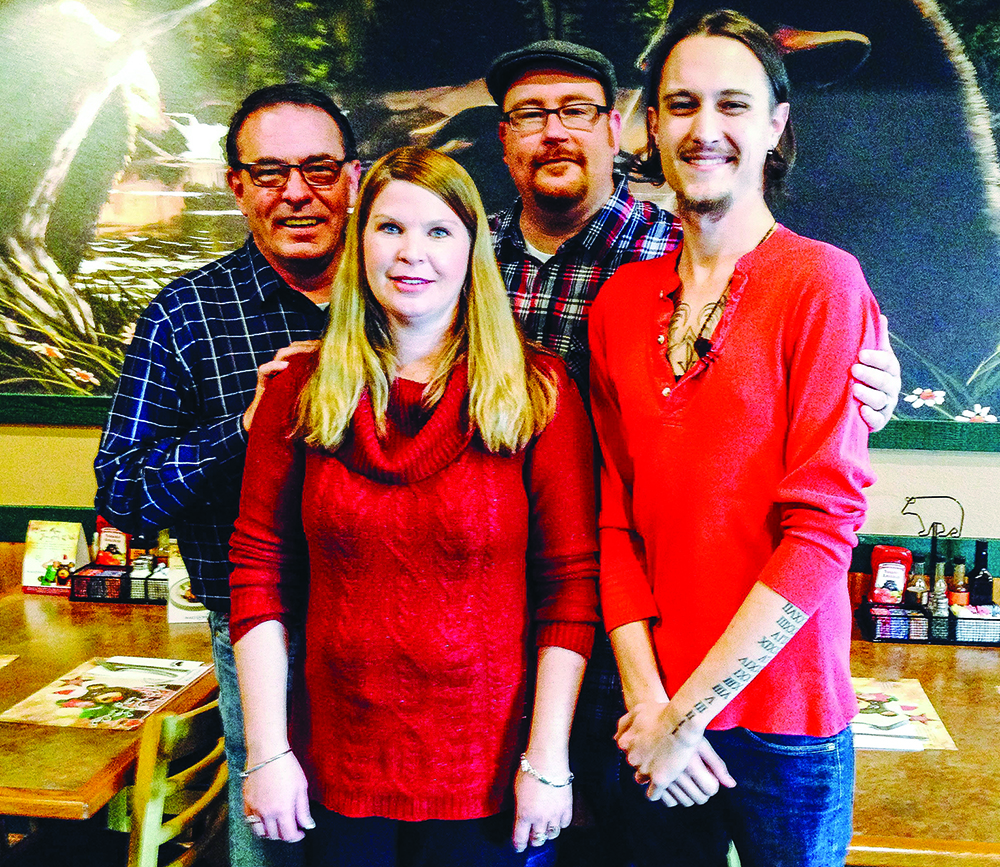 Over the last decade, Kairos has organized 35 church-planting projects and teams in 12 states and five countries besides the U.S., according to executive director Stan Granberg:

• Seventeen churches — from the Agape Church of Christ in Portland, Ore., to Ethos Church in Nashville, Tenn., to The Feast Church in Providence, R.I. — remain active.

• Nine church plants did not launch or later closed.

• And nine — including EPIC Church — are in the launch phase.

What has Kairos learned?

Has organized 35 church-planting teams in Arizona, California, Montana, New Hampshire, New Jersey, Ohio, Oregon, Pennsylvania, Rhode Island, Tennessee, Texas and Washington state , plus Angola, Australia, Canada, Guatemala and Panama.
“Our theology at its core is dynamic and capable to sustain a church-planting movement,” Granberg said of Churches of Christ. “(But) when we allow our heritage to settle into an expression of a particular era, it does not work well.”

Since 2003, Churches of Christ nationally have suffered a net loss of about 71 congregations per year, according to data compiled by 21st Century Christian, the Nashville, Tenn.-based publisher of “Churches of Christ in the United States.”

“In general, churches rooted in and practicing 20th century church models are not doing well in our 21st century culture,” said Granberg, a former missionary to Kenya who is supported by the Southwest Church of Christ in Jonesboro, Ark.

Unlike most Churches of Christ, about 60 percent of Kairos church plants use instrumental music in worship. “Most of our younger generations do not accept the theological support we have used for a cappella,” Granberg said.

Has planted about 30 churches — as far east as Virginia, Georgia and Alabama; as far north as Chicago and Regina, Saskatchewan; and as far west as California and Oregon. However, the majority of church plants have been in Texas, where the ministry is based.Moreover, some Kairos church plants allow women to pray and read Scriptures during the public assembly, he acknowledged.

Every generation must reevaluate what practices may hinder others from turning to God, said Tod Vogt, executive director of Texas-based Mission Alive, another church-planting ministry associated with Churches of Christ.

“Changing the name, adding instruments and allowing women broader roles are not the most significant changes the North American church needs to make to engage the culture,” Vogt said. “If so, churches doing these things would be far more effective than they are.

“The greater challenge … comes from deeper cultural attitudes and practices such as individuality, consumerism, narcissism and competition. These will only be addressed through an intentional focus on discipleship and mission.”

Jenkins describes the 450-member Spring Meadows church as “living proof” that a congregation can thrive without compromising long-held doctrines. 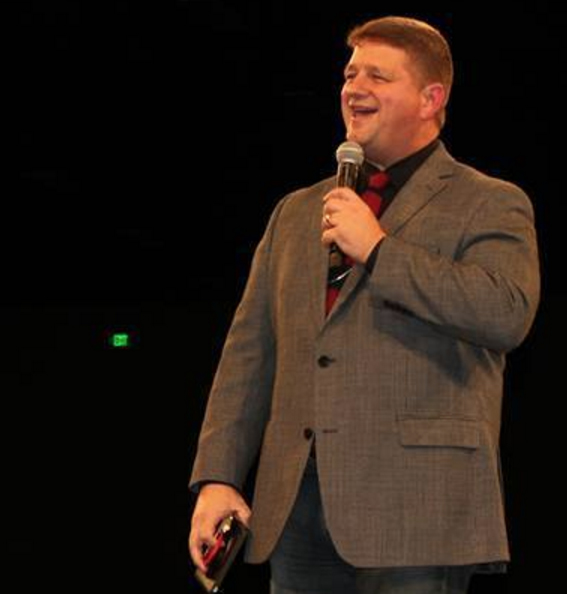 Dale Jenkins preaches for the Spring Meadows Church of Christ in Spring Hill, Tenn. (PHOTO VIA FACEBOOK.COM)The Tennessee preacher said he sees a need for Churches of Christ to plant more churches and “revision” others to meet the needs of changing communities, but he voices concerns about some approaches.

“Some churches doing the planting seem to want to plant churches that are not Churches of Christ but more akin to an interdenominational fellowship,” Jenkins said. “On the other hand, some want to so micromanage the plant that they stunt their growth and effectiveness.”

In Springfield, Mo., the Sunset Church of Christ has planted three churches since 2000 — each time sending out between 50 and 150 of its own members to start a new area congregation.

“None of these plants could be described as nontraditional even though they are not clones of Sunset,” said Sunset minister Joe Bright, whose congregation has grown back to its original 600 members while the church plants in the Springfield-area communities of Nixa, Brookline and Willard flourish.

Planted a church in Sayre, Pa., in 2014 and will launch a second one in Tuckhannock, Pa., in June. Plans call for two additional churches to be planted in northeastern Pennsylvania. Read Don Myers’ expanded interview with the Chronicle. The Elmore Church of Christ in Alabama oversees a church-planting movement called the Antioch Initiative — with a goal of starting congregations in four northeastern Pennsylvania counties with no known Churches of Christ.

“An evangelist who is mighty in the Word to teach God’s eternal truth in a plant is an essential element in its infancy,” said Don Myers, minister for the 140-member Elmore church, north of Montgomery.

However, the Alabama congregation won’t attempt to impose its will on autonomous congregations planted in Pennsylvania and elsewhere, Myers said.

“We do not want to support a work, make their decisions for them, do all their evangelizing or teach them prooftext answers to doctrinal questions,” said Myers, who teaches Bible at Faulkner University in Montgomery. “Such could later render them 20-year-old spiritual babies who do not evangelize and cannot interpret the Bible themselves.”

Myers advocates a focus on people, not properties; on discipleship, not spectatorship; and on the concept that every Christian is a missionary and a priest of God.

“Jesus gave the Great Commission that mandated discipleship,” he said. “It was not the great suggestion.”

GOING TO WHERE THE PEOPLE ARE

Back in Torrance, developing relationships with non-Christians — many of whom never have heard the gospel story — is a major focus.

The church planters endeavor to introduce Jesus to the estimated 90 percent of area residents who don’t attend any church — be it the Raineses’ favorite waitress at the Black Bear Diner or “the hippie drum circle dude” who invited Brimberry to a Zen meditation. 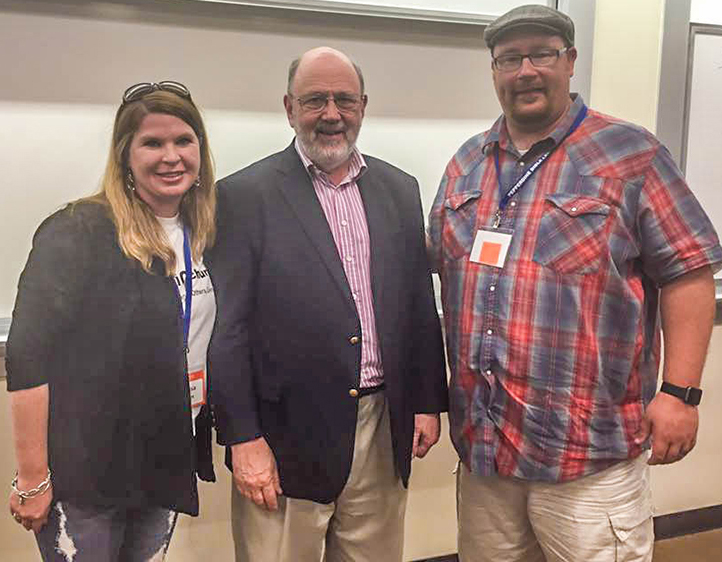 Matt and Melissa Raines pose with New Testament scholar N.T. Wright during the recent Pepperdine Bible Lectures in Malibu, Calif. Read the Chronicle’s 2014 interview with Wright. “We are facilitating an encounter with people who don’t know they have a problem,” Matt Raines said.

But it’s crucial that the relationships be authentic, Melissa Raines said, and not tied to whether a person accepts Christ.

“It’s not a bait-and-switch kind of relationship building,” she said. “It’s more of a witness if we continue that relationship than if we just end it because we are pursuing someone else.”

For EPIC Church members, the Sunday experience will include brushing shoulders with patrons at the Del Amo Fashion Center — a shopping mall with more than 200 stores.

Worshipers will head straight from the AMC theater into a food court filled with lost souls.

“We’ll be surrounded,” he said, “by the people that we’ve just learned Jesus loves.”