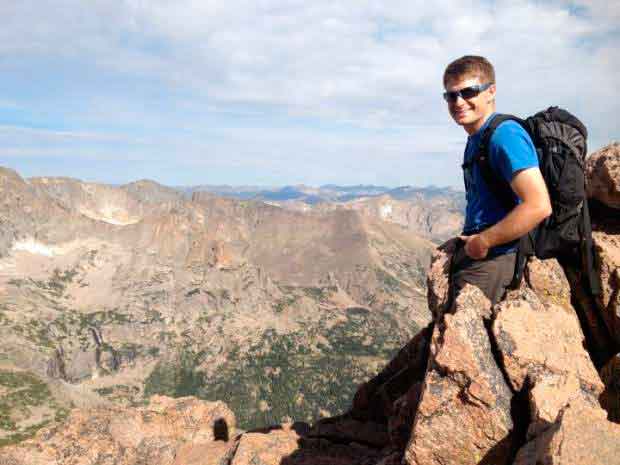 Treff Carpenter at the “keyhole,” on the route to Longs Peak during a climbing trip with fellow members of the Longmont Church of Christ in August. (Photo via www.greeleytribune.com)

Treff Owen Carpenter, a 28-year-old member of the Longmont Church of Christ in Colorado, died Sept. 2 after falling nearly 150 feet in Colorado’s Boulder Canyon.
Carpenter and a group of fellow climbers from the congregation were traversing the popular “Boulderado” rock formation when Carpenter lost his footing and fell onto the roadway below, according to the Boulder County Sheriff’s Office. Witnesses attempted CPR, but Carpenter was pronounced dead by paramedics, the Denver Post reported.

Jason Lynch, a deacon of the Longmont church, traveled with Carpenter and other church members on previous climbing trips. Lynch told the Greeley Tribune in Colorado that Carpenter was an active, optimistic member of the congregation’s young adults ministry.

Carpenter worked at Noble Energy and lived in Greeley, but the Longmont church was the bigger part of his life, Lynch said. He’d only been there since May, but Carpenter was attracted to the church’s young adult group for Christians in their 20s and 30s and had already made a huge impact. Lynch is the deacon of the group. … Carpenter, with his soft voice and quiet nature, wasn’t a cheerleader, Lynch said, and yet others were drawn to him.
“He wanted to go and go and go,” Lynch said. “It wasn’t about being an eloquent talker. He was just passionate. He had a drive in his eyes to go.”
That was true of his love for the outdoors, of course, but Lynch said that was true for many other activities at the church.
“Even though he was still new too, when we had some new people come to the church, he drew people in and made them feel welcome,” Lynch said.

Read the full story.
Memorial services were Sept. 7 at the University Church of Christ in Denver. View Carpenter’s obituary.