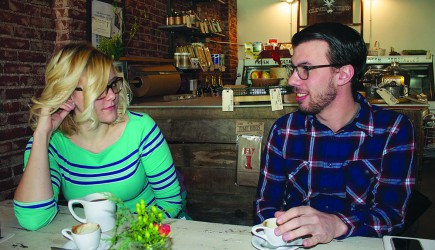 Purple Door Coffee in Denver — the dream of friends who graduated from universities associated with Churches of Christ — makes a difference.

At 10, @Jonathan9NEWS takes you to a coffee shop that gives homeless young adults jobs http://t.co/U6LHfQYeQl pic.twitter.com/BR7ZK9SLDL

Two years ago, The Christian Chronicle reported on plans for a Denver coffee shop with a mission.

“A royal mocha, fit for a King” was how the Chronicle described the endeavor:

Neither will it be a zoo.

That’s the vision of Madison Chandler and Mark Smesrud, 20-something Christians whose shop will employ teens and young adults transitioning away from life on the streets.

“We don’t want it to be like, ‘Come look at all these homeless people and ask them questions about how hard their lives have been,’” said Chandler, 24, a 2010 graduate of Freed-Hardeman University in Henderson, Tenn.

“A lot of them have been through some really terrible stuff, and we want to create an environment that they’re proud of and can learn, grow and be respected in,” she added.

Customers who walk through the shop’s purple door won’t notice a sign labeling the business as a Christian ministry.

Nor will a banner identify the barista as a homeless person.

“If people learn of your mission, they may come once or twice if your coffee’s just OK,” said Smesrud, 25, a 2010 graduate of York College in Nebraska. “But if you are a great coffee shop and have a great mission, that’s actually a better business model.”

But make no mistake: Christ — not cappuccino — is the real passion for Chandler and Smesrud. They make no secret of their desire to expose employees and customers to Jesus.

Churches of Christ in the Denver area have helped raise funds to launch the nonprofit Purple Door Coffee — an extension of the Dry Bones Denver homeless ministry.

This week, 9News in Denver featured a young woman who has benefited from Purple Door Coffee:

DENVER – Hidden on the edge one of Denver’s most colorful neighborhoods, the color purple is making a name for itself.

It’s the color of the front door at The Purple Door coffee shop, a place that does so much more sell than coffee and tea.

“The reason they call this place Purple Door Coffee is because back in the day purple … was for royalty,” said Jenna Williams, who has been working at the coffee shop for close to one year. “It had high value, and so whenever you walk through that door, anyone, they should know you have worth, you have value.”

But it’s the people behind the counter who are benefiting the most from finding their worth and value. The people taking orders and serving coffee were all homeless.

“They’ve given me so many second chances, like, they’ve taught me what it is to have a real a job,” Jenna said, a 23-year-old who had been living on the streets since she was 15. “It’s all about love. We’re not just a business, we’re not just a coffee shop. We are a family.”