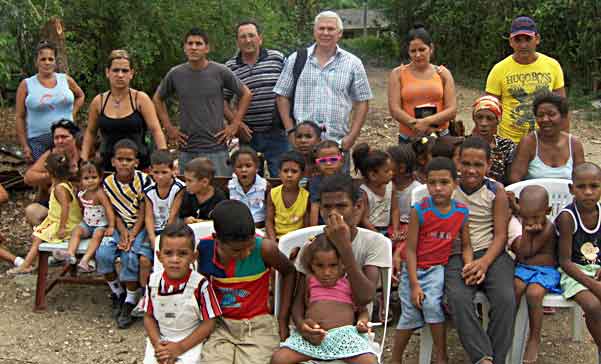 Edelto Villa and newly baptized members of a church and their children in central Cuba. (Photo provided by Edelto Villa) 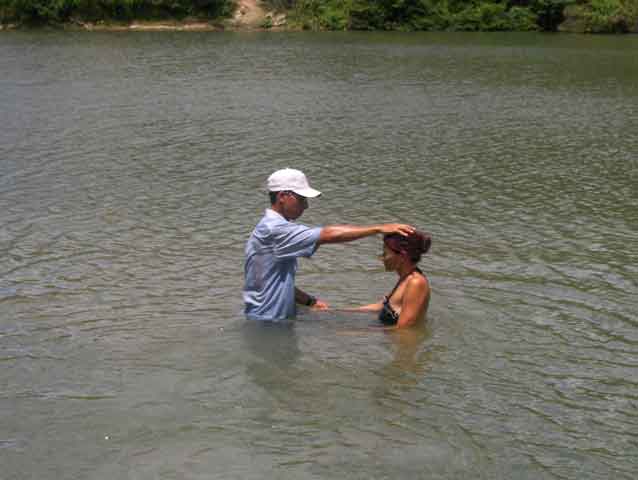 A baptism in Taguasco, Cuba. (Photo provided by Edelto Villa)

Evangelist Edelto Villa sent photos of a recent church-planting effort in Teguasco, a town near the center of Cuba.
“A new church has been born and 11 people were baptized for the glory of our Lord,” Villa said. “This has been the fruit not only of many days of evangelism, but of many prayers as well.”
I haven’t had the pleasure of meeting Brother Villa in person. I found out about his work last summer when I visited the Gulf Shores, Ala., Church of Christ. Villa is one of 34 Cuban evangelists supported by the Gulf Shores church, with assistance from the White Rock Fund in Texas.
I was able to visit Havana in 2005 for the 35th Caribbean Lectureship. It was an amazing, surreal experience — singing hymns praising God as a giant image of Fidel Castro smiled down on us. I also saw lots of beautiful cars from the 1940s and 50s.
In early 2006 I wrote a piece about the brothers and sisters I met in Cuba. Here’s an excerpt: 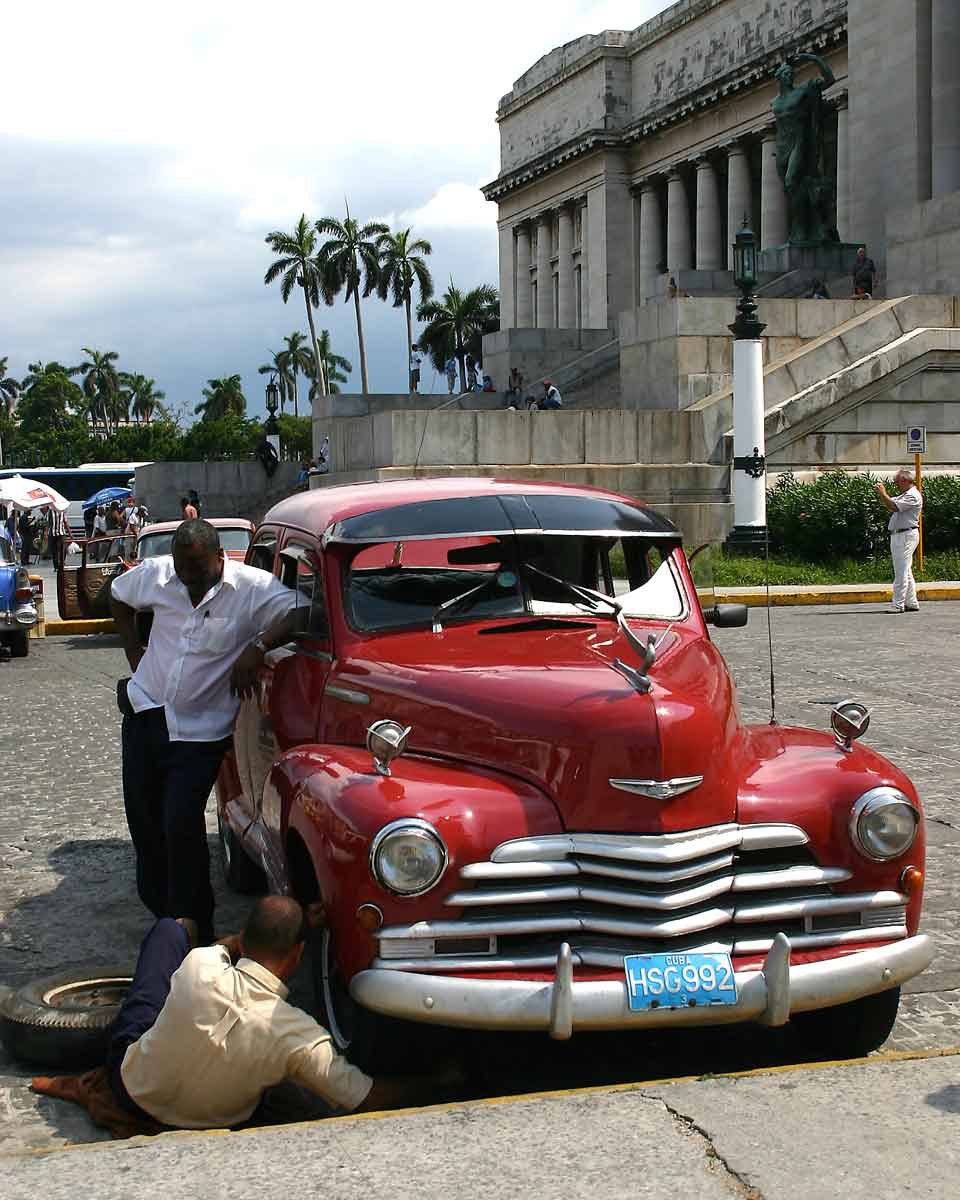 A classic car gets a tire change in dowtown Havana. (Photo by Erik Tryggestad)

Standing on the Malecon, the city’s fabled coastal boulevard, it’s a scant 90 miles north to Key West, Fla.
It still feels like a million miles.
Forty-seven years after the revolution that brought Fidel Castro to power, the two countries remain worlds apart. Former U.S. President Jimmy Carter made a landmark goodwill visit in 2002, but the next year, President Bush tightened the nation’s travel embargo on Cuba.
In the past five years churches of Christ in the United States have enjoyed positive relations with the island nation. Contributions from churches in Alabama and Louisiana — and a host of church-supported ministries — have made churches of Christ one of the largest contributors of humanitarian aid to Cuba, said Gary Bradley, a church member in Alabama who works with Cuban churches.
That status has allowed U.S. church members unprecedented access to their counterparts on the island, after a half-century of near-isolation. Church members who have traveled the short distance to Cuba report vibrant, growing congregations in this communist nation. 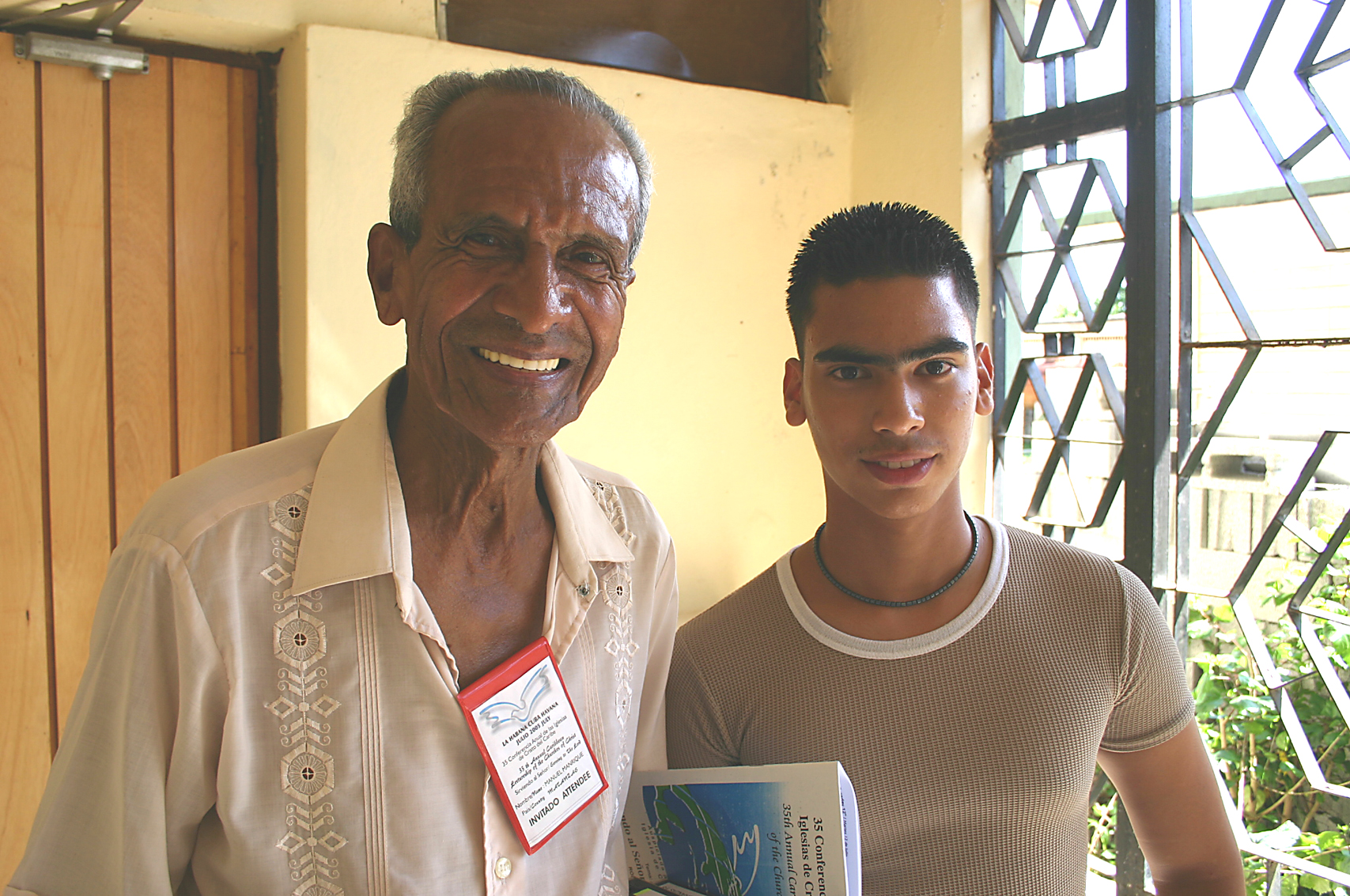 Minister Manuel Manrique and his grandson, Dajan, in 2005. (Photo by Erik Tryggestad)

I think my favorite interview during the trip was with 80-year-old Manuel Manrique. He was baptized in 1943 at age 17 — more than 15 years before the Cuban Revolution. He stayed faithful and brought his children up in the faith. He introduced me to his 17-year-old grandson, Dajan, who said he hoped to be a minister someday. I would love to get an update on them.
Another favorite memory from that trip was Andrew Blake, a church member from Jamaica. Whenever we crossed paths, he made a point of yelling, “Hey, newspaper-mon!”
By the way, this year the 40th Caribbean Lectureship is in the Caribbean nation of Trinidad and Tobago. I’ve been to two of the lectureships — the one in Cuba and the 2007 event in San Juan, Puerto Rico.
Back in Cuba, many Churches of Christ are growing rapidly. Several churches and ministries in the U.S. support work there. Abilene, Texas-based Herald of Truth makes regular trips to the island. 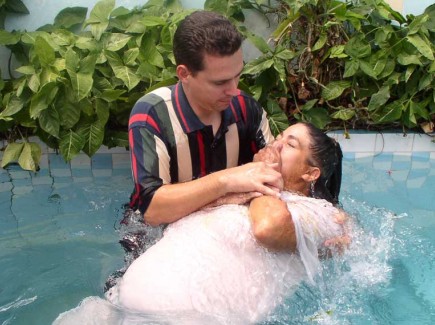 Tony Fernandez performs one of 21 baptisms on a Sunday in 2009 in Matanzas, Cuba. Fernandez is Herald of Truth’s representative in Cuba. (Photo by Tim Archer)

But support for Cuba work is a divisive issue in the States, especially for Cuban Americans. Last year, after the U.S. Congress eased some of the restrictions on sending money and visiting Cuba, I talked to church members about the future of Cuba work, including Paul Schwiep, a deacon of the Sunset Church of Christ in Miami.

“Opinions run the spectrum from ‘We should invade tomorrow’ to ‘We should lift the embargo tomorrow,’” Schwiep said.
The 650-member congregation represents at least 18 nationalities, said Jeff Hinson, one of the church’s elders. The church has sent mission teams to countries in Central America including Honduras and Nicaragua — but not Cuba.
“These decisions are emotional,” Schwiep said, and the church’s leaders have decided to treat the issue in the manner prescribed Romans 14:22: “So whatever you believe about these things, keep between yourself and God.”
That means “we’re not going to talk about it at church,” Schwiep said.

What do you think? Does your church support work in Cuba? What is your dream for the future of Churches of Christ there?