Kimberly Mauck
“No one can win the war individually. It takes the wisdom of the elders and the young people’s energy.”

That’s a lyric from “Glory,” written and performed by John Legend and Common. It’s the theme song of the upcoming film “Selma,” and it encapsulates Fred Gray’s dual roles — attorney and advocate — in the Civil Rights Movement.
The film follows the lives of the movement’s leaders, including Martin Luther King Jr., and the Selma to Montgomery marches in Alabama in 1965. Oscar winner Cuba Gooding Jr. portrays Gray, who sought protection for the marchers in the court case Williams v. Wallace.
Gray, an attorney who represented King, Rosa Parks and other civil rights leaders, also is a longtime minister and elder of the Tuskegee Church of Christ in Alabama.
In a 2008 dialogue with The Christian Chronicle, Gray discussed the role of churches and people of faith in the movement. 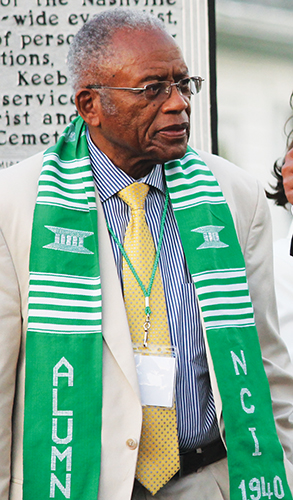 Fred Gray stands next to a historical marker honoring his mentor, Marshall Keeble, in Nashville, Tenn., during a reunion of Nashville Christian Institute alumni in 2012. (PHOTO BY ERIK TRYGGESTAD)

“When I hear people talk about the church not being completely involved in the Civil Rights Movement, I know that isn’t the truth,” Gray said. “I was involved. Most of the members in our church were involved. I think the Lord played a major role in bringing about civil rights.”
King, also a minister, is portrayed in “Selma” by David Oyelowo, a classically trained British stage actor who has had several supporting roles in recent films, including “Interstellar” and “Lee Daniels’ The Butler.”
Critics praise the film, which is predicted to earn Oscar nominations in categories including Best Picture.
Fifty years after the events of “Selma,” as new protests in Missouri and New York appear on TV screens, the film “ends on a note of queasy triumph,” writes Scott Foundas in Variety, “with the sense that we have come so far and yet still have so far to go, and the hope that the arc of the moral universe does indeed bend toward justice.”
“Selma,” not yet rated at press time, opens nationwide Jan. 9.