‘The church was just so overwhelmingly warm and friendly,’ one evacuee says. ‘It just made me cry.’

BELTON, Texas — In the wake of Hurricane Harvey, strangers became like family.

Christians motivated by their love for Jesus opened their hearts — and their church buildings — to men, women and children fleeing a storm that flooded tens of thousands of homes and caused at least 82 deaths.

“I couldn’t put it into words. They’ve treated us like we were royalty from some foreign country,” retired Army Col. Chuck Emmerich, 81, said after spending four nights in the Belton Church of Christ gymnasium, about 200 miles northwest of Houston. 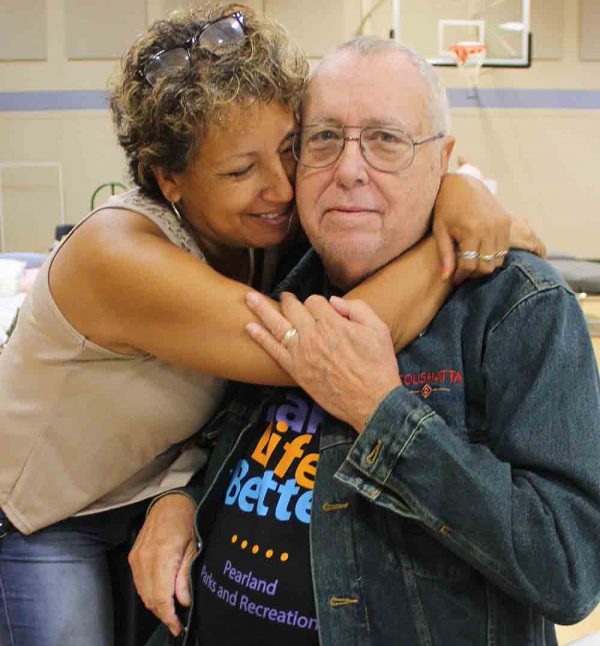 “They’ve treated us just like family, really,” added Emmerich, who was using a walker after stepping on glass during his evacuation and requiring treatment at the Carl R. Darnall Army Medical Center at Fort Hood.

A police boat rescued Emmerich, his wife, Marjorie, and their mixed-breed terrier, Mejia, on Sunday, Aug. 27, as floodwaters rose in their Houston-area home.

When the Pearland, Texas, residents went to bed about 10:30 p.m. Saturday, Aug. 26, there wasn’t even a puddle in their yard, Emmerich said. But when he got up to go to the bathroom about midnight, his feet squished into wet carpet.

“We’re flooding!” he told his wife.

‘A lot of goosebump moments’

The husband and wife climbed into their second-floor loft. Their son in Ohio alerted a police dispatcher to send help. They were rescued about noon.

Later, the couple and their dog boarded a bus and endured a six-hour ride — with lots of twists and turns to avoid flooded roadways — to this central Texas community of 18,000, between Waco and Austin.

Related: After Harvey, hope for heroes and victims

At the Belton church Monday morning, Aug. 28, volunteers were waiting. Church members greeted the evacuees, fed them, gave them dry clothes and offered them cots with comfortable mattresses and neatly arranged blankets.

The Belton Church of Christ — like the First Baptist Church down the street and many other houses of faith throughout the Lone Star State — had taken steps years before to “stand up” as a temporary shelter in just such a disaster. 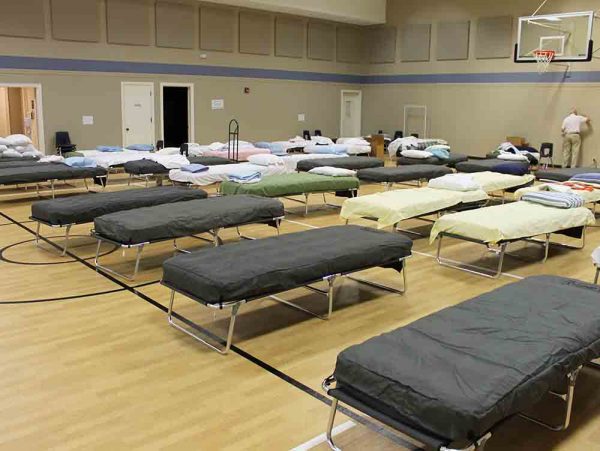 Cots with mattresses gave Hurricane Harvey evacuees a comfortable place to sleep at the Belton Church of Christ gymnasium in Texas. (PHOTO BY BOBBY ROSS JR.)

“We’ve had a great group of volunteers come together to pull this whole building of love together and take these evacuees in and help get them back on their feet,” Smith said. “We’ve made sure that they have a great place to sleep, a warm meal in their body and lots of love and visiting and activities.

“We’ve had a lot of wonderful stories, a lot of goosebump moments,” she added. “If somebody had a need, we tried to fulfill it as quickly as we could. … I can’t even explain all of it. You just kind of have to be there and experience it to understand how big of a difference a small gesture can be to somebody who has nothing.”

‘We were really homeless’

Like the Belton church, the Champions Church of Christ — a Houston congregation that avoided flooding — transformed its building into an emergency shelter.

“I just can’t think of a word to describe them,” said Gilbert Alexander, a 61-year-old Venezuelan who was in Houston for cancer treatment when the rains came. “It’s like a family — very nice people.” 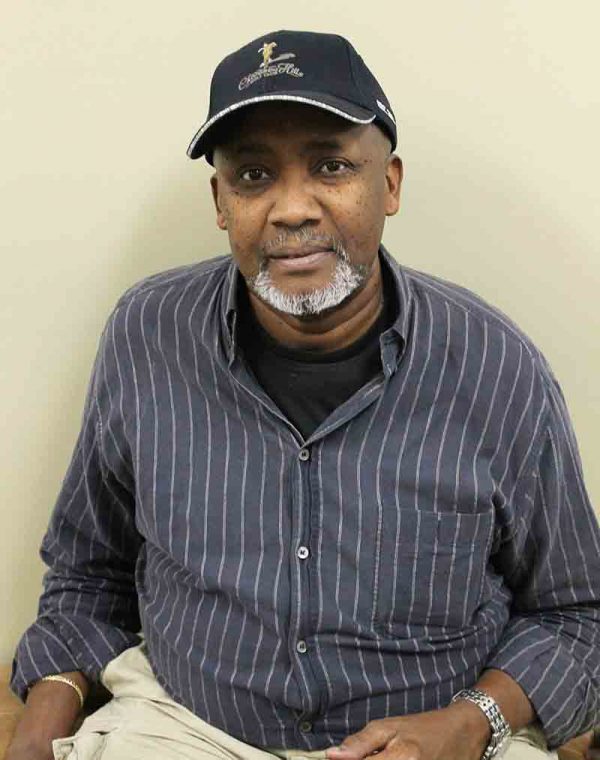 Gilbert Alexander voices appreciation for the emergency shelter provided by the Champions Church of Christ in Houston. (PHOTO BY BOBBY ROSS JR.)

As their house flooded, Richard Sinclair, 77, and his wife, Toni, 69, waded through waist-high water and climbed a fence as a Cajun Navy volunteer helped them to safety.

“We were really homeless without any idea where we were,” Toni Sinclair said. “The church was so overwhelmingly warm and friendly. It just made me cry.

“They had a little kennel for our dog, and they brought us food,” she said through tears. “We hadn’t eaten in a day and a half. And they just continued to give to us and love us and share with us what we needed to do. And they gave us clothes and a shower.”

“They were not people used to asking for help but giving help,” Reed said. “They sat with wet clothes and cold feet with tons of donated items all around them. Finally … we were able to give some of the most basic needs: food, socks, shower, bedding, makeup. The next day we were able to get them placed in very nice temporary housing.

“This is just one of thousands of stories, but it is humbling and emotional for us all,” she added. “God bless all of those who are suffering and those helping.”

Related: In a small Texas town, a Church of Christ becomes a hub for Harvey relief

The Champions church housed up to 15 evacuees per night, even while focusing on other disaster needs — such as distributing food and cleaning supplies to victims.

“One of the things that we’ve been praying is that God would use our new building as a tool in letting the church be a light,” minister Larry Keele said. “This effort was just a tool in a little different way than we thought, and it has made a difference in the community.” 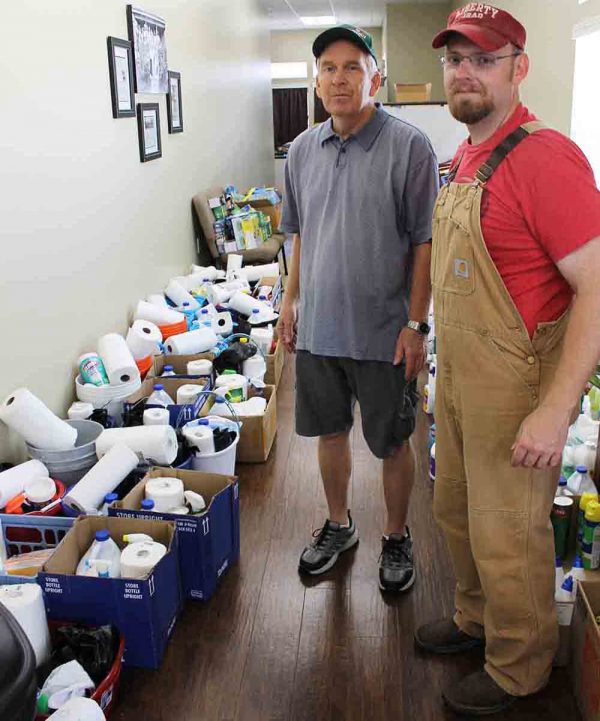 Back in Belton, the church housed 34 evacuees — including entire families.

Elder Scott Cox said the shelter was a natural way to show Jesus’ love to people caught in a desperate situation.

“It was just meeting a need,” Cox said of the church’s role. “It was really neat to see the community support that came as well.”

Emmerich, a father of three and grandfather of five, said he assumes his house — which has flooded multiple times before — will be a total loss.

“I don’t have a home,” he said, voicing hope that Federal Emergency Management Agency funding will allow him to rebuild outside a flood zone. “From what I understand, the water went over the top of the house.”

After four nights, the Belton church’s shelter was dismantled as evacuees were moved to other temporary housing. 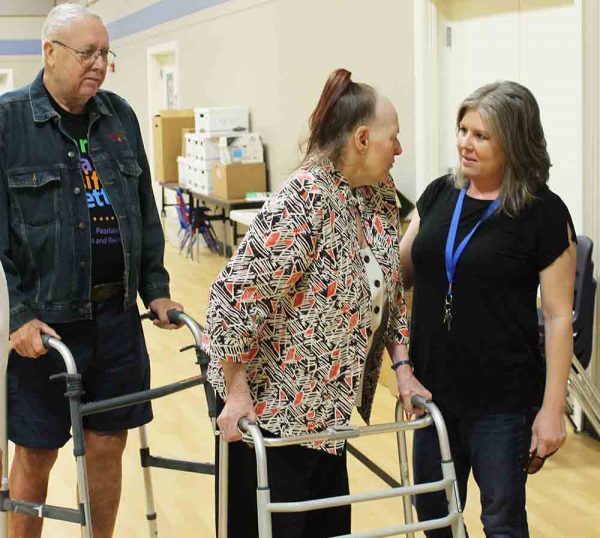 Emmerich’s voice choked with emotion as he and his wife said goodbye to the volunteers.

Church member Maria Garay wrapped her arms around Emmerich and smiled at him.

Related: After Harvey, ‘churches have done far more than the government’

“He’s my sweetie. If he wasn’t married, I’d take him,” she said, teasingly.

“We wanted to keep Chuck and Marge!” another member, Sue Roeder Groveunder, wrote on Facebook. “It was hard to let them leave.”

In the wake of Hurricane Harvey, strangers became like family.