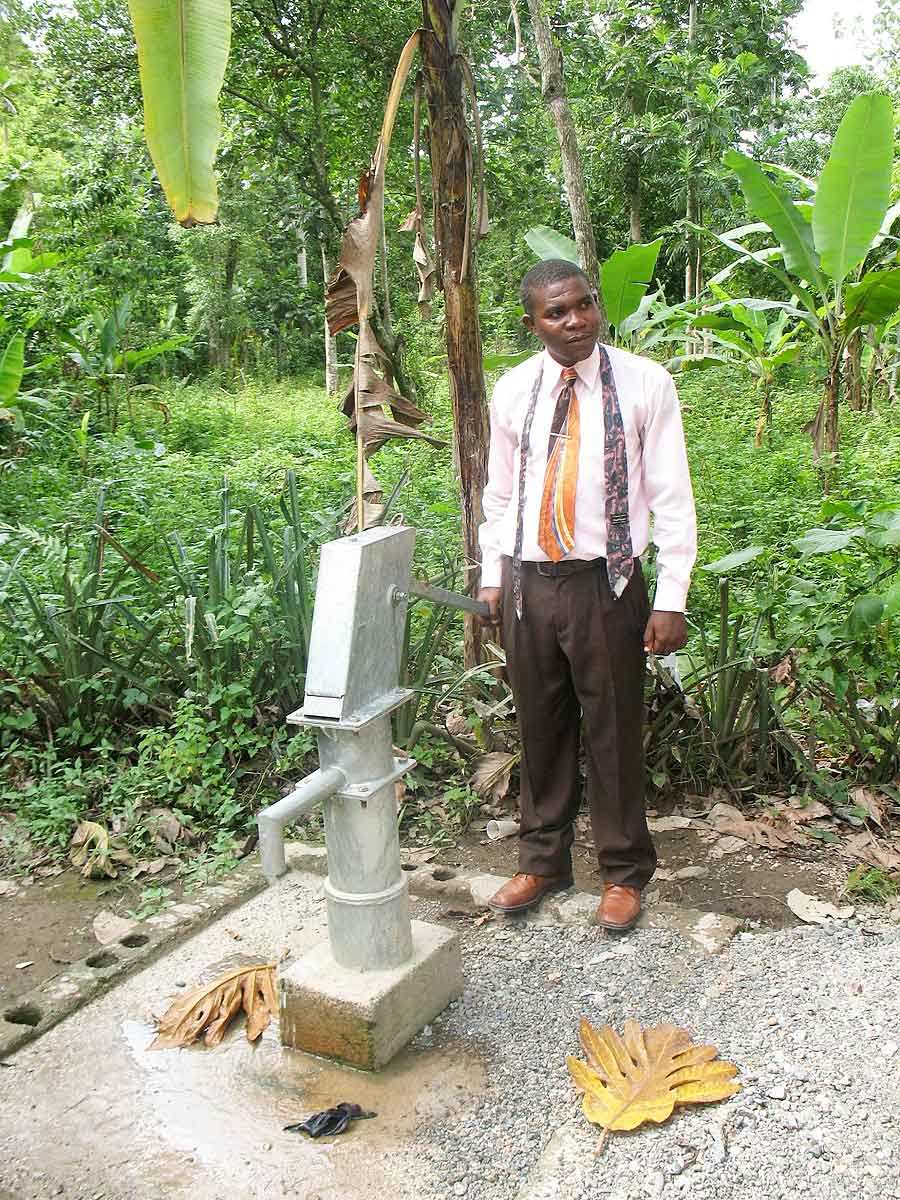 Churches, ministries give living water — and bleach — to Haiti

Two reports about water purification efforts in Haiti came to my inbox recently.
The first is from the Church of Christ at Gold Hill Road in Fort Mill, S.C. The church launched a program to dig wells and latrines on the property of Churches of Christ throughout Haiti.

Rodney Richard, minister for the Peltan, Haiti, Church of Christ, displays the well built just outside his church’s building and explains the conversions to Christ that resulted from people within the community visiting the well to get clean drinking water. (Photo provided)

“Everyone within the community will be able to come to the church to get clean drinking water,” said Karen Goins-Byrnes, a member of the South Carolina church, “and while there they will be able to learn about the living water that only God can provide.”
The program will “nourish both body and soul,” she added.
Another Gold Hill Road member, Tim Mastenbrook, has made almost 50 trips to Haiti in the past 25 years. (I met him and Goins-Byrnes in January when I was reporting on the one-year anniversary of the Haiti earthquake.) Mastenbrook said that the church is trying to raise $6,000 per well and $2,000 for each latrine — to be placed in communities with the greatest needs.
“Each location would provide clean drinking water and safe disposal of sewage for at least 1,000 people, half of those being children,” Mastenbrook said. “We have now implemented the program in several communities and all have resulted in significantly lowering of the number of cholera cases and increasing the number of baptisms into Christ.”
During that January trip, the Gold Hill Road members distributed dropper bottles of bleach to churches. Eight drops of the bleach treats one gallon of water and makes it suitable for drinking. Each two-ounce dropper bottle treats and provides approximately 250 gallons of drinking water. Once the bleach is gone, the families bring their bottles to church on Sunday to refill it with bleach.
“We go to the churches, meet with the preachers and explain how to use the bleach properly,” said Tim Bannister, a member of Gold Hill Road and a water treatment and wastewater disposal expert. “Many of the Haitians know they need to treat their water with bleach, but they don’t know the ratios or have storage containers for the bleach. We will continue the dropper bottle program in each community until we can provide them with a well and latrine.”
For more information, contact Goins-Byrnes at [email protected] or (704) 904-7579. 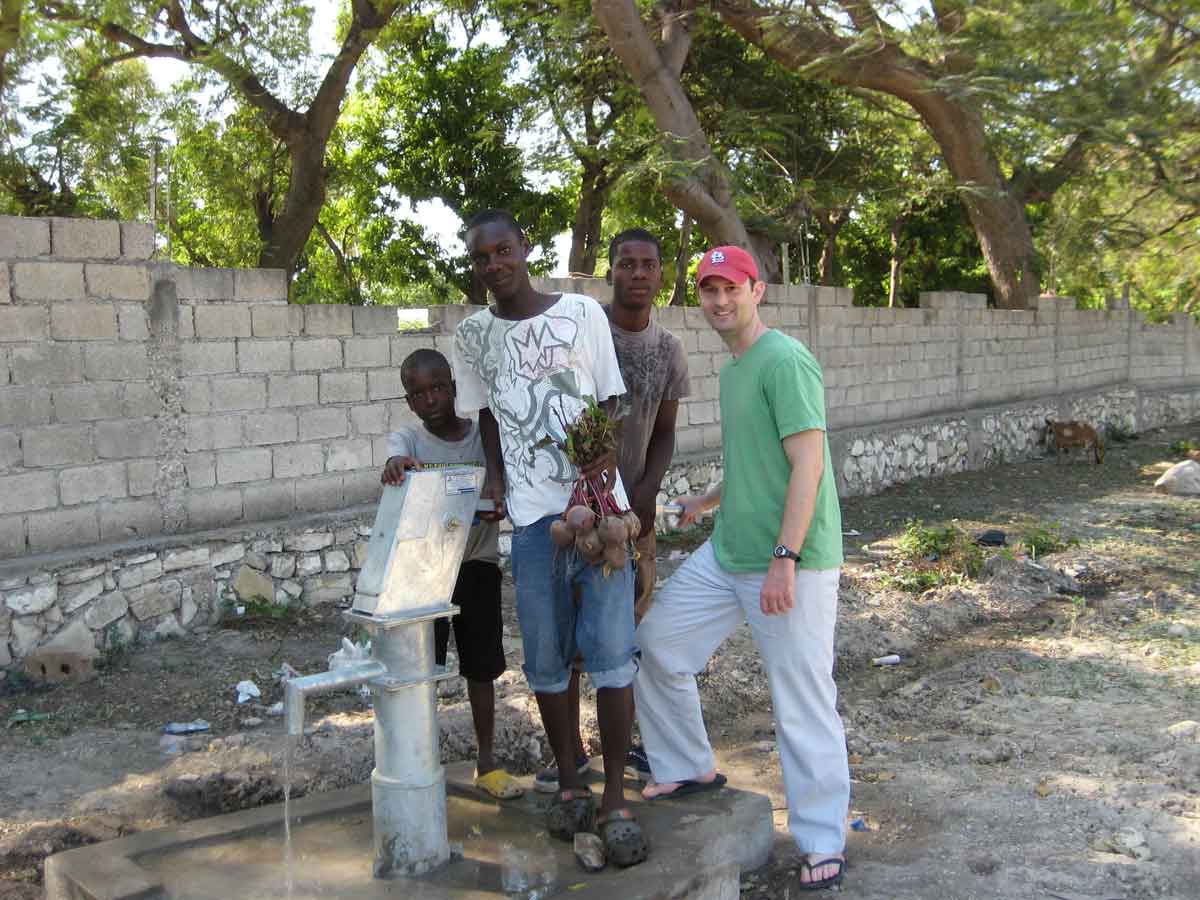 Jon Lee and Haitian youths stand next to a water well provied by Healing Hands International and The Living Water Project. (Photo provided)

The second report comes from Healing Hands International, which recently partnered with The Living Water Project to drill five new wells in Haiti. Here’s an excerpt:

“We were blessed to work together,” said Harry Hames, director of Haitian Relief for Healing Hands. “We were able to get a truck-mounted drill rig into Haiti right after the earthquake in January 2010. Living Water had a project between Port-au-Prince and Cap Haitien, right in the middle of the country, an area that the hurricane had come through. That area is farmland, and the children carry the water in five-gallon buckets and had to walk as far as two miles to get clean water. They were so happy to cut their walk down.”
Living Water was an idea birthed by Shanon Dickerson in 2001. He died in 2002 of a rare form of cancer, but his legacy flourishes.
“Shanon realized just how good we have it here in the United States, and when he was confronted with the fact that so many people didn’t have something as basic as clean water, he felt as a follower of Jesus he couldn’t ignore that,” said Jon Lee, director of The Living Water Project, who met Dickerson at the Otter Creek Church of Christ in 1999.
In 2004, Lee renewed Dickerson’s commitment to providing clean water and helped form a board of directors for Living Water. To date, 36 wells have been drilled in 12 countries.

Healing Hands has provided 52 wells since the January 2010 earthquake, Hames said.
“When the wells were being drilled, there were anywhere from 60 to 100 people waiting to be the first person to get water from the hand pump,” Hames said. “Water is the biggest blessing that we can do for those people.”
I was blessed to see this in person in January. Here’s a video I shot of the process:
httpv://www.youtube.com/watch?v=rhiro0xjUGI&feature=channel_video_title