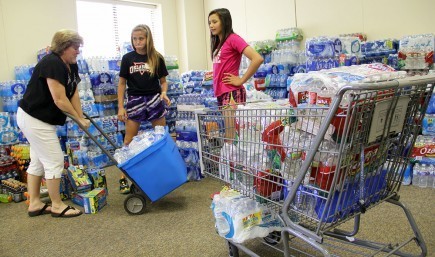 Erik Tryggestad and Murray Evans
Two Churches of Christ involved in tornado relief efforts sustained damage to their buildings during another major spring storm that hit the Oklahoma City metropolitan area — nearly two weeks after the twister that devastated the city of Moore, Okla.
High winds blew campers and fifth-wheel trailers across the parking lot of the Central Church of Christ in Moore on May 31.
Eleven days earlier, the church’s building lost power and was splattered with mud as a tornado ripped apart a hospital across the street. Church-supported relief ministries began using the building as a relief center — even before power was restored.
On May 31, the building lost power again and sustained additional damage — from passing storms and from passing motorists who broke into the building seeking shelter.
“It’s been a fiasco,” said Dennis McClintock, an associate director of Nashville, Tenn.-based Churches of Christ Disaster Relief Effort.

McClintock, who lives in Springfield, Mo., helps coordinate the ministry’s work in the central U.S. He was one of about 30 relief workers at the church building when tornado sirens blared about 6:30 p.m. The workers took shelter in the church’s bathrooms.
As McClintock sought shelter, he found himself surrounded by dozens of soaking-wet strangers.
“Where did you come from?” he asked them. They explained that they were motorists on nearby Interstate 35, fleeing the storm. When the weather became dangerous, they abandoned their cars near the church building and broke one of the doors to get in.
Nearly 150 motorists — plus several dogs, cats and a pet iguana — crammed into the church building, McClintock said.
One of the motorists, Drew Wilson, stopped outside the church building when a bucket used in the disaster relief efforts blew under his car.
He got out of his car, removed the bucket, and got back in — just as the storm blew a 31-foot travel trailer — McClintock’s sleeping quarters — on top of Wilson’s car. The trailer smashed the car’s windshield and hood, then rolled off the car and into the street, landing upside-down.
Wilson then left his car and took shelter in the church building. He was uninjured — something McClintock considers miraculous. 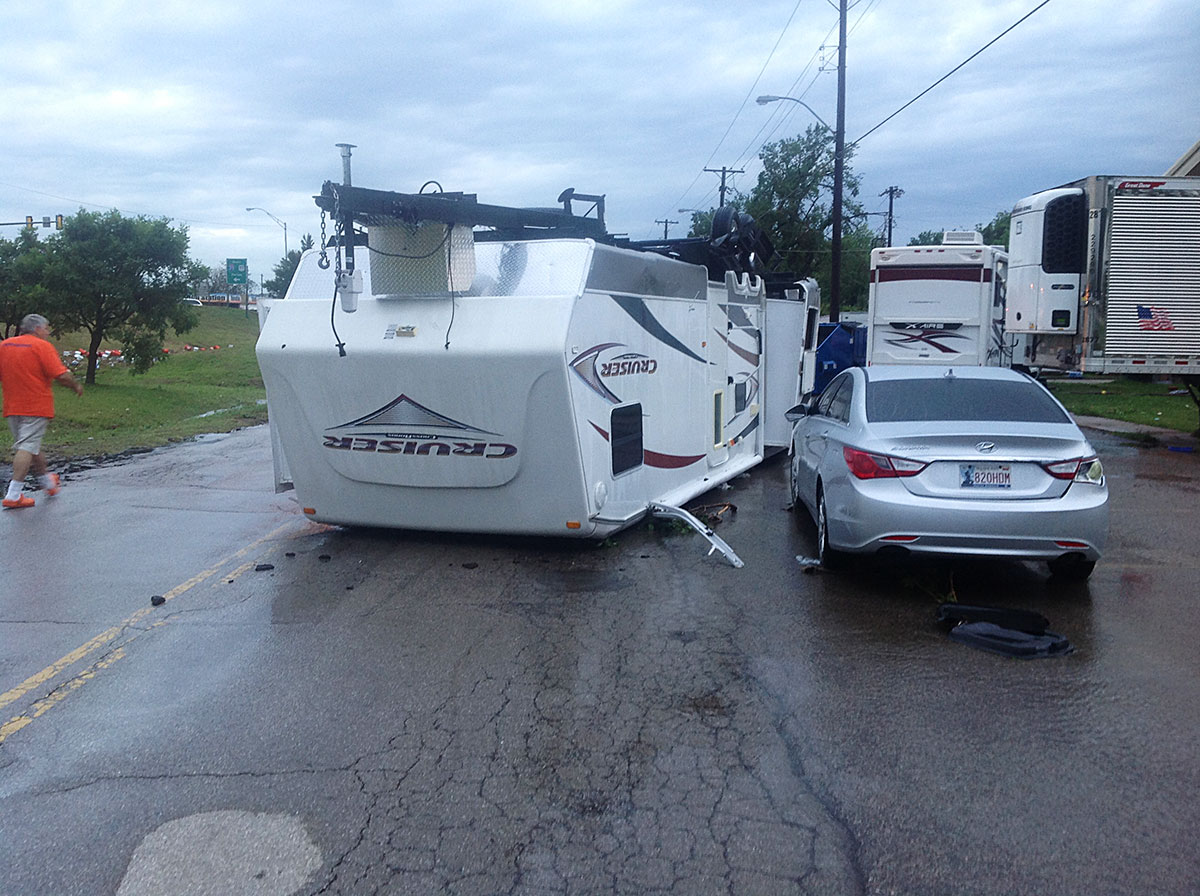 According to news reports, 18 people died in the May 31 storms, which damaged homes in the city of El Reno, Okla., and caused widespread flooding.
About five miles northwest of the Central church, at least a dozen classrooms at the Oakcrest Church of Christ in Oklahoma City were flooded during the May 31 storms, which dumped more than seven inches of rain in parts of the region.
Oakcrest’s Family Life Center has served as a relief center since the May 20 tornado ripped through south Oklahoma City and the nearby cities of Newcastle and Moore, killing 24 people and damaging hundreds of homes and businesses.
Associate minister Scott Bulmer said that the storms peeled up part of the roof on the east side of the building, which is where the congregation’s children’s ministry is based. Some staff offices also were affected.
“There’s pretty significant water damage,” Bulmer said. “There were ceiling leaks and water in the classrooms. The murals on the walls in that hallway had damage to them. We don’t know if it was a tornado or straight-line winds, but when the roof got peeled up, a lot of water got in there.”
One of the building’s air-conditioning units is caving in and will have to be replaced. Bulmer said church leaders are hoping the building did not sustain major structural damage.
Power to the building was restored late Saturday and services were held as usual on Sunday, although classes were canceled and barricades were up in the damaged portion of the building.
One of the building’s air-conditioning units is caving in, Bulmer said, and will have to be replaced. Church leaders will meet with insurance adjusters on Monday to further assess the damage.
“We hope the repairs are not going to be too delayed,” Bulmer said. “That part of the building is where we have out Mother’s Day Out program, all of our nursery classes and up through fourth and fifth grades. All those classes are affected in one way or another, so we’re not going to wait long.”
Bulmer said the Family Life Center was not damaged and will continue to serve as a tornado relief center “for as long as it takes.” He said Oakcrest has received about $250,000 in donations for tornado relief, including about $43,000 from its own members.  The church has handed out about $200,000 in relief funds so far, he said.
“Every penny we have collected is going to victims,” he said.