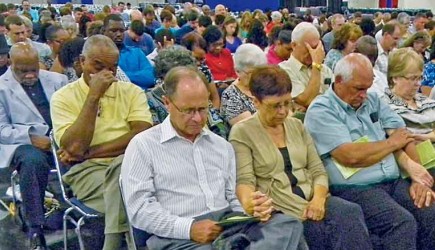 Bobby Ross Jr.
HOUSTON — For months, nearly a dozen billboards along busy thoroughfares have promoted the Churches of Christ Campaign for Christ.
After more than a year of planning, about 70 Houston-area congregations — black, white and Hispanic — joined together to serve the needy and seek the lost.
The recent five-day campaign featured the theme “Coming Together As One.” The message to residents of America’s most ethnically diverse metropolis: Christians can break down racial walls.
“We’re promoting one church and giving a statement to the community that we’re one in Jesus Christ,” said Cruz Hernandez, minister for the Hidden Valley Church of Christ, where he preaches in English and Spanish.
More than 4,000 people worshiped God inside the George R. Brown Convention Center, just down the street from Minute Maid Park, home of baseball’s Astros.
In a massive “Day of Good Works” before the gospel meeting started, hundreds of campaign volunteers distributed backpacks and school supplies to 3,000 children and families who lined up hours before the doors opened.
“There is no color boundary in heaven,” said Patricia Berry-Jones, a member of the Highland Heights Church of Christ.

Campaign volunteers gave away English and Spanish Bibles and provided free services such as vision and dental exams, sports physicals, diabetes screenings, immigrant legal advice and family portraits.
More than 500 church members signed up to donate blood.
Minister Gary Smith’s voice carried over a loudspeaker as he welcomed families to the Day of Good Works.
“Thank you! God bless you! Have a wonderful time!” urged Smith, who preaches for the Fifth Ward Church of Christ. “If you have any questions, just ask someone in the white T-shirts.”
‘A MASSIVE IMPACT FOR GOOD’
Teisha Johnson and her sons, Gahvyn, 12, and Triston, 9, decided to be baptized as a result of the campaign.
“I’ve always believed in Jesus and God, but I’ve struggled with living the Word and being faithful,” said the single mother, who began visiting the Sugar Land Church of Christ about six months ago.
“Since I’ve been at the Church of Christ … it just makes everything so much clearer to me,” she added. “It made me realize, ‘Yes, I need to obey the Gospel and really make a true commitment to fully live by the Bible.’”
The campaign resulted in at least 16 baptisms and many ongoing studies, organizers said. Registration materials filled out by those helped will allow individual churches to follow up.
Dozens of congregations set up booths with colorful banners and pamphlets.
“We’ll give you a homecooked meal and everything else,” Brenda Carter, a member of the Fidelity Church of Christ, told a stranger who visited her booth. “Just look for me. I’ll be there.”
Sponsoring congregations and individual members contributed roughly $350,000 to cover the campaign’s costs.
“The Campaign for Christ is really the best effort we’ve had of getting churches together to make a real impact on Houston,” said Larry Keele, minister for the Champions Church of Christ. “We’re doing good works, we’re sharing the name of Jesus with the city, and it’s going to be a massive impact for good.”
‘I’D NEVER HEARD OF IT’
Two years ago, the Campaign for Christ involved primarily black churches.
Benton Baugh, a longtime member of the Memorial Church of Christ, recalls seeing a sign on the back of a taxicab advertising the 2010 campaign.
“I’d never heard of it,” said Baugh, who served as co-chairman for the 2012 Day of Good Works. “The reason is because I’m white. The black congregations are much more active in the community in area-wide cooperation than the white congregations are.”
Houston is the seat of Harris County, which has more Churches of Christ — 124 — than any other county in the nation. In all, the 10-county Houston metro area has roughly 200 congregations and 50,000 adherents of Churches of Christ.
But individual congregations often fail to reflect the makeup of Houston — an immigrant gateway more diverse than New York, Los Angeles or Miami, according to Rice University researchers.
Similarly, area-wide church events tend to involve a particular racial group and not Christians of all colors.

“That’s one thing we noticed at the last Campaign for Christ,” said David Duncan, minister for the Memorial church. “There was a desire to preach Christ and to help others, but it didn’t feel like it was a brotherhood-wide event.”
For five years, the predominantly white Memorial church and the predominantly black Fifth Ward church have conducted joint worship assemblies twice a year. They cooperate on benevolence projects and marriage enrichment programs.
The two churches’ ministers swap pulpits and maintain a close friendship — to the extent that Duncan felt no hesitation in voicing his concern to Smith about the 2010 campaign’s lack of racial diversity.
This time, organizers worked harder to cross racial and ethnic boundaries and involve a wide diversity of church leaders and members, Smith said.
“The last campaign, some of the brothers reached out, but not as much as this campaign,” said Smith, who served as one of the 2012 campaign’s coordinators, along with Duncan and Hernandez. “This campaign, without a doubt, was groundbreaking because more churches were invited up front to come together and talk about what we could do.”
That dialogue sometimes resulted in stressful conversations as organizers worked through issues such as who would preach, what style of worship would prevail and how long assemblies would last.
“You have some who want to get the program over with real quick,” Smith said, “and some who want to stay here all night.”
The difference in approach was evident as Jack Evans Jr. of Southwestern Christian College in Terrell, Texas, followed Howard Norton of the Baxter Institute in Tegucigalpa, Honduras, to the microphone on Sunday night. Both Norton, who is white, and Evans, who is black, praised the diverse nature of the crowd.
Norton said he was happy to be in a setting where neither color, language nor nationality mattered.
“What matters is Jesus Christ,” he said.
Evans agreed, saying, “This is what the ‘one body’ ought to look like.”
But Evans found it difficult to limit his remarks.
“I don’t think I’ve ever preached a sermon that fast,” he joked, wiping sweat from his brow after removing his jacket and loosening his tie. “I’m an hour-long preacher. At 30 minutes, I’m just getting started.”
He proceeded to prove that, repeatedly interrupting the invitation song — “Just As I Am” — to beg the lost to step forward.
That same night, the crowd sang hymns such as “When We All Get to Heaven” and “Sing the Wondrous Love of Jesus” in English and Spanish.
Andres Trejo, a member of the Lawndale Church of Christ, voiced amazement at the four-part harmony that echoed off the rafters.
“We’re like one note the whole time,” he joked about his home congregation. “But here, they do voices — soprano, alto. I like to see that. I’ve never seen this much energy coming from one group.”