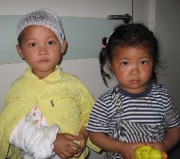 Erik Tryggestad
Gary Jackson described May 19 as “one of the harder days, emotionally, in my entire life.”

Jackson, a church member living in Beijing, visited earthquake survivors in a hospital in Chengdu, capital of China’s Sichuan province. The May 12 quake, the deadliest in decades, claimed at least 34,000 lives in central China, according to Xinhua, the country’s news agency.

The survivors, many of them children, were trapped beneath rubble for days, Jackson said.
“Some have lost parts of their limbs,” he said. “All of the families have lost their houses and everything in them.”
Jackson and other church members in Beijing plan to take a van of supplies to Dujiangyan, a city near the earthquake’s epicenter. Church members also plan to adopt one or two of the families at the Chengdu hospital, providing funds to “help them get a new start,” said Jackson’s wife, Danita.

“We wish we could do the same for all of them,” Gary Jackson said.

The Garden Ridge church in Lewisville, Texas, is collecting funds to assist in the work.
China Mission plans to assist about 2,000 children orphaned by the earthquake, director Ron Brown said.

The organization, sponsored by the Peachtree City, Ga., church, currently cares for about 670 orphans in Christian care centers registered with the Chinese government. The Georgia church is collecting funds and sending them to China Mission’s office near the quake site.

The Chinese government will establish three “tent cities” where the orphans will live until China Mission can construct a new Christian care center, Brown said. Workers with China Mission will relocate about 200 children from Sichuan to the organization’s other facilities.
China Mission contacted Rapha International, a church-supported relief ministry, about the possibility of sending two anesthesia machines and 138,000 doses of amoxicillin to China, said Sid Allen, president of Fort Worth, Texas-based Rapha.
“We propose to go into the area as soon as the roads are passable and begin to construct an orphanage for these poor orphans,” Brown said. “If we can find an existing building which can be rebuilt, we will use it.  If not, we will construct a new facility for the orphans.”

Funds for China relief may be sent to:

Make checks payable to “Peachtree City Church of Christ” and put on the memo line “for earthquake victims.”