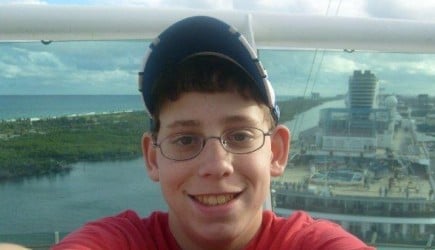 Staff Reports
Sam Thomsen, a 13-year-old member of the Southwest church in Omaha, Neb., was killed late Wednesday when a tornado sliced through the primitive Boy Scout camp in Iowa where he and others were staying.
In all, four teens died and 48 adults and campers were injured when the twister struck. The group had been warned about the approaching storm and had taken shelter, but collapsing roofs, fireplaces and flying logs and debris were believed to have caused the deaths. At the family’s request, an autopsy is being performed.
Thomsen, the son of longtime Southwest members Larry and Sharon Thomsen, was adopted as an infant through the Nebraska Christian Services agency sponsored by the congregation. The Thomsens have two older children, Lindsey and Sarah, and all three were home-schooled.
“There are very few 13-year-old boys in the world you can call sweet,” said Carol Copeland, a Southwest member and friend of the family, “and Sam was one of those. It’s very disheartening.”
Thomsen loved sharing Jesus with his friends, scouting and the Nebraska Cornhuskers, said Southwest minister Jim White. The teen delivered a sermon following Leadership Training for Christ this year. The subject: his namesake, Samuel.
“To be honest, I didn’t expect much,” White said. “But he did really well. I was so impressed. Sam and I kidded around a lot but he had a much more spiritual side that it was amazing to watch develop.”
White said the congregation of around 300 members is a tight-knit community made up of many long-time members. Leaders are planning a service for Friday night to allow Thomsen’s friends – including 40 or so in the church’s youth group – to grieve together.
“In a state where there are only 42, 43 Churches of Christ, we really feel each other’s pain very deeply,” White said. “Larry and Sharon have a house full of people right now loving them and Christians across the state praying for them.”
Copeland said the storm also did extensive damage – most of it from large, prolonged hail, to the Nebraska Youth Camp in Hastings.
“Not only are our youth hurting because of Sam’s death, but every single one of them goes each year to NYC,” she said. “We lost Sam, and a place where our youth are able to be together has been seriously damaged.”
But as was the case two years ago when 16-year-old Southwest member Sarah Neal was found shot to death in her home, the congregation will emerge stronger, Copeland said.
“When you’ve been together as long as many of us have, you go through a lot – good and bad times,” Copeland said. “We need each other more than ever right now.”
A tribute from Sam’s youth minister, Franklin Wood, can be found here.