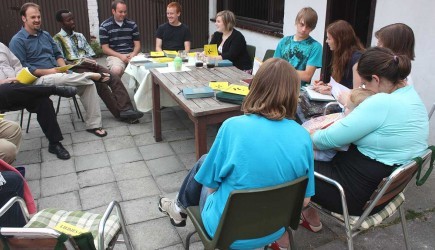 Erik Tryggestad
GHENT, Belgium — About a dozen Christians gather in the courtyard outside Luk and Holly Brazle’s home for Sunday worship.
After a few hymns in Flemish, a Belgian couple emerges from a neighboring apartment and sits down to a casual dinner, just a few feet from the small congregation. While the church members pass the emblems of Christ’s body and blood, the neighbors pass baguettes.
Evangelism is tough in Ghent, the second-largest city in Flanders, the Flemish-speaking region of Belgium.
“With socialized medicine and affluence, there aren’t many in Belgium that are in want,” Luk Brazle said. “This creates the feeling that they have supplied all they need for themselves.”
Brazle, the son of missionaries, was born and raised in Belgium, “so my heart aches for the lost in a country that many have said is a dead mission field,” he said. Four years ago he and Holly left their work in nearby Antwerp and moved here to plant a church.
Assisting them is Sue Foster, a graduate of York College in Nebraska who met the Brazles while serving as a ministry intern in the Netherlands. The Ghent church has made contacts by helping people improve their conversational English through the Let’s Start Talking ministry, she said.
“There are interesting opportunities here since Ghent is a university city and since Belgium has such a large immigrant population,” Foster said.
Church members from abroad have become part of the church family as they’ve studied at Ghent University.
Jo-Anne Duque, a Christian student from the Philippines, found out about the church through the social networking Web site Facebook. Emmanuel Arthur, a church member from the African nation of Ghana, attended the church while he pursued a master’s degree in soil science at the university.
Though small, the Ghent church “provides a unique sense of belonging for its members,” said Arthur, who recently moved to Denmark to continue his studies. “I already miss it and will definitely go back to visit whenever I get the opportunity.”
Zack Morgan, a student at Abilene Christian University in Texas, served as an intern with the church this summer. He distributed flyers to the people of Ghent, offering prayers and Bible studies and inviting them to church. Most of the Belgians who received the flyers treated him coldly, he said.
But he also saw small signs of hope — including a Sunday night service when one of the Brazles’ neighbors walked across the courtyard and offered the believers a plate of brownies. The simple act showed that she “had some sort of respect or appreciation for the church and its presence in her community,” he said.
The work in Ghent is hard, Luk Brazle said, “but the Belgians continue to be God’s children, and they deserve to hear God’s message to them. There are those who are listening.”