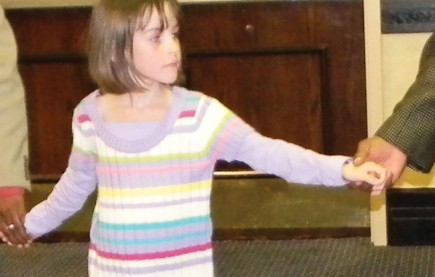 Bobby Ross Jr.
BRIDGETON, Mo. — In a hotel restaurant, weekend guests nibbled bacon and eggs and sipped orange juice and coffee.
A short ride up a glass elevator, a less ordinary scene occurred: About 50 men, women and children gathered in a ballroom with red-cushioned chairs and bright chandeliers. They came not for a business meeting or a fancy banquet but to pray, sing praises and worship God.
The St. Louis area’s newest congregation — the New Life Church of Christ — meets at 8 a.m. Sundays at the Crowne Plaza Hotel, near Lambert-St. Louis International Airport.
Minister Thomas Jackson describes the church plant as a domestic mission effort aimed at meeting people where they are — as Jesus did the Samaritan woman at the well in John 4.

The New Life church intends to reach people who have no relationship at all with God, he said, as well as former church members who have become estranged.
“The idea is, there’s a lot of hurt. There’s a lot of pain,” Jackson said. “There’s a lot of hearts that have been bruised, and because of that, some of the relationships are … we tolerate each other, but we don’t get along like a family.”
Jewel McDaniels, 34, a St. Louis native and third-generation member of Churches of Christ, attended a recent New Life service with her mother, Judy, and 15-year-old son, Tony.
McDaniels said she’s encouraged by the opportunity for a fresh start away from the walls and barriers that sometimes hamper congregations.
“I’m hoping that this will be a new life, a new beginning, to break down those,” she said.
The early start time allows Jackson to preach at New Life and then drive about 20 minutes to his regular work — as minister for the Wagner Avenue Church of Christ in St. Louis.
A congregation of mostly older people, the Wagner Avenue church meets in a more traditional setting: a red-brick building with wooden pews and a cross perched atop the roof.
Like Jackson, New Life worship leader Jerry Williamson serves full time with a different congregation. Williamson is the youth and worship minister for the Florissant Church of Christ.
New Life emerged, Jackson said, as he and Williamson asked, “How can we reach beyond our areas of the Kingdom?”
“Wagner’s on one side of town. Florissant’s on another side of town,” the preacher said. “Yet nobody is on this side of town, reaching people that perhaps don’t have a relationship with God at all.”
‘BLESSING BUSINESS’
On a recent Saturday night, a few hundred Christians and visitors from throughout the area came together to celebrate the official launch of the New Life church.
Williamson and Christian singer Dorian Paul Williams, a member of the Trinity Gardens Church of Christ in Houston, took turns leading a selection of a cappella hymns ranging from “Lord, Reign in Me” to “Everybody Will Be Happy Over There.” Directed by school administrator Carla Payne, a choral group from the Christian Academy of Greater St. Louis performed.
Lee Lewis, pulpit minister for the O’Fallon Church of Christ, west of St. Louis, prayed and asked God to bless the new work.
“In these times of economic downturns and the increase of hopelessness, it is important for people to know, understand and believe that our God is still in the blessing business,” Lewis said in an e-mail to The Christian Chronicle. “Dr. Jackson and his team are the vanguard in this area to make straight the way of the Lord for a people who may be too down to get to him.”
Vicki Judd, a Florissant member since 1989, came with her daughter, McKenna, 16, to show support for the new work.
“I think it’s fabulous,” Judd said. “People in the community that maybe have been dissatisfied with another church, this is a good way to get other people here.
“And with the different ministers … that are coming from other churches to here, it shows that, you know what, we can all come together,” she added. “You’re not doing a disservice to your own church. You’re just helping with another ministry within the area.”
The hotel is centrally located, Jackson said.
“We can touch people without interfering with any other ministry north, south, east and west,” he said.
‘LIVING WATER’
New Life leaders canvassed neighborhoods near the hotel to invite visitors to attend. The church plans other outreach projects — such as free meals at apartment complexes — to engage the community.
As Jackson shared his vision for New Life, he reflected on the woman at the well.
“When this woman got the living water, she left her water pot, ran back to her city and told the town, “Come see a man that told me everything that I’ve ever done,’” Jackson told the congregation.
“When she went back to her town, she changed that entire community,” he added. “Jesus changed her, and because of her change, she changed the lives of those around her. She had a new life, because God met her right where she was and walked her to where she needed to be.”