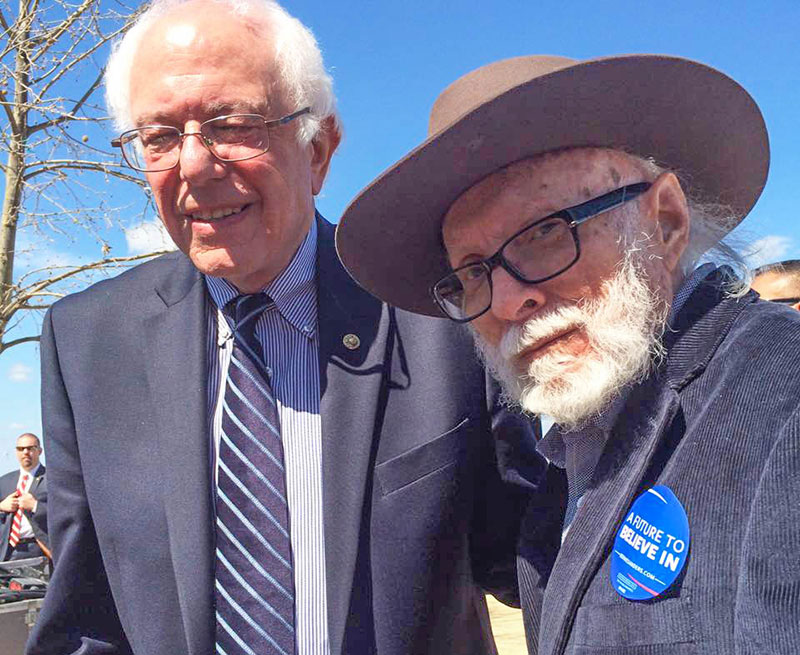 Lynn Mitchell gets a shoutout from Democratic presidential candidate at campaign event in Austin, Texas.

Lynn Mitchell is “feelin’ the Bern.”

Mitchell, who retired in 2014 as minister of the Heights Church of Christ in Houston and religious studies professor at the University of Houston, led the prayer Saturday at Democratic presidential candidate Bernie Sanders’ campaign rally in Austin, Texas.

“Me and old Bernie,” said Mitchell, 75, who posed for a Facebook picture with the Vermont senator.

The Christian Chronicle asked Mitchell why he likes Sanders. His response via Facebook:

I like Bernie because my whole life and ancestry and Bible belief dispose me to prefer him.

First, I am not a registered Democrat or Republican. My “Restoration” ancestors were from Washington County, Pa. (associates of Walter Scott and members of the Dutch Fork Church and intermarried with the German Freys of Pittsburgh). Moving to Gallatin, Tenn. (Sumner County) after the Civil War, they adopted an entire family of African-American newly freed slaves who took the name Mitchell for themselves and worked as sharecroppers and raised the Clydesdale Budweiser horses on the Mitchell plantation (which later became the Eddy Arnold plantation). My great- uncle Frey was mayor of Gallatin when World War I loomed on the horizon, The Mitchells and Freys suddenly became persona non grata. Their unforgivable sins were being Stone-Campbell German Pacifists (treason), being the only Lincoln/Teddy Roosevelt Republicans (and therefore anti-slavery and anti-segregationists). Being ungraciously invited to leave Tennessee, my grandfather Frank Lynn Mitchell bought train tickets for the Mitchells, Freys and all the African-American Mitchells (who begged to go with them) to the no-man’s-land of the Lower Rio Grande Valley of Texas.

When they arrived in Texas with $20,000, he immediately purchased several hundred acres of land from W.E. Stewart Land Co. (after which Weslaco, Texas, was named) and immediately began to build a cotton gin. As soon as the last nail was nailed into the cotton gin, the land company lawyers knocked on his door and notified him that he had to vacate premises because his deed was faulty. (The company was a Canadian carpetbagger outfit which deliberately had people sign faulty deeds.) The Mitchell family was destitute for the rest of their lives and spent the their lives as migrant workers, along with African-American Mitchells.

I will continue the rest of the story, which includes the fact that my parents were migrant workers when I was born and several years thereafter, and that, according to Edward R. Murrow, I was the first migrant workers child to obtain a graduate degree in the United States (M.A. at Abilene Christian College in 1969). And that many Church of Christ preachers in North Texas and Oklahoma were Christian Socialists.

• In the year of Trump, do values, character matter to Christian voters?

• Elephant in the pew: Is the GOP the party of Churches of Christ?