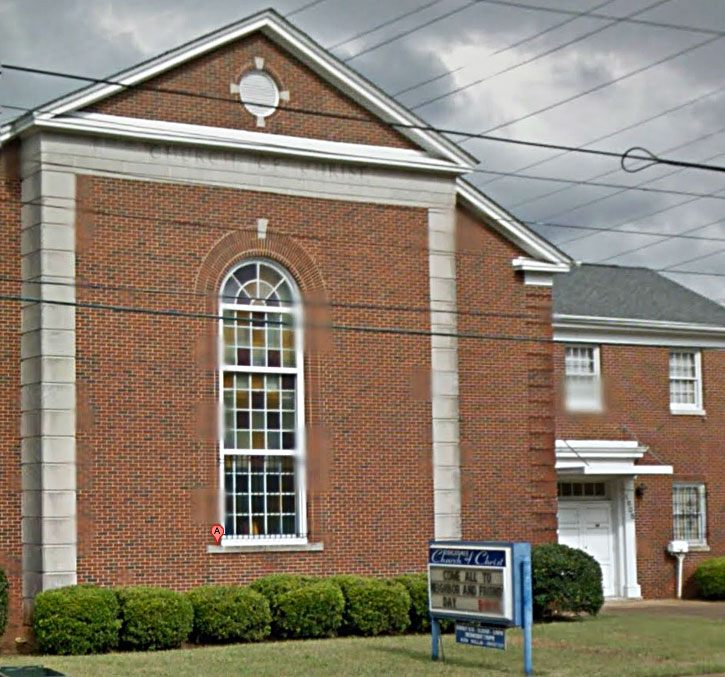 Update: The Chattanooga Times Free Press reports on Sunday worship at the Ridgedale Church of Christ, which drew five protesters and includes additional comments from minister Ken Willis.
Just weeks after The Christian Chronicle published “Homosexuality and the church,” a news report on how Churches of Christ are responding to same-sex attraction, a Church of Christ in Chattanooga, Tenn., is at the center of controversy for its actions toward the family of a same-sex couple.
CNN reports:

The Ridgedale Church of Christ in Chattanooga, Tenn. (Photo via Google maps)

The mother of a gay detective has been booted from the Tennessee church she attended for decades.
Elders at Ridgedale Church of Christ told Linda Cooper and two relatives that their public support for Kat Cooper, Linda Cooper’s gay daughter, went against the church’s teachings, local media reported. In a private meeting, reports say, Linda Cooper was given a choice: publicly atone for their transgressions or leave the church.
Linda left the church.
Kat Cooper is a detective with the Collegedale Police Department. This month, she fought successfully for health benefits for her same-sex spouse, Krista, from the town.
The Board of Commissioners passed a resolution allowing for same-sex partner benefits, becoming the first city in Tennessee to do so.
Along the way, the mother publicly supported her daughter. That support appears to have led to a rift with her church.
“My mother was up here and she sat beside me. That’s it,” Kat Cooper told the Times Free Press of Chattanooga. “Literally, they’re exiling members for unconditionally loving their children – and even extended family members.”
“Her answer to them … is that she had committed no sin in her mind. Loving her daughter and supporting her family was not a sin,” Kat Cooper’s father, Hunt Cooper, told CNN affiliate WTVC. “There was nothing to repent about. They certainly couldn’t judge her on that because that was between her and her God, and it was not their place to judge her for that.”
“The sin would be endorsing that lifestyle,” Ken Willis, a minister at Ridgedale Church of Christ, told to the Times Free Press. “The Bible speaks very plainly about that.”

Read the full story.
The story has drawn a flurry of negative reaction from readers — including David Cook, a Times Free Press columnist.
“I wish someone would stampede in, overturn your tables and drive the homophobic madness from your pulpit. Exorcise you,” Cook writes. (Read the full column.)
Neal Pollard, minister for the Bear Valley Church of Christ in Denver, responds to some of the criticism in a blog post titled “Why Ridgedale church of Christ Is Getting Slammed.”
Pollard notes that “we do not have all the facts of the case” and asks readers:

Please pray for Ridgedale.  Encourage them and show them love.  The detractors are popular and validated by a world separated from God.  Let us have the courage to stand by God’s people who are willing to stand up for His will.

The Christian Chronicle has left messages for minister Ken Willis and leaders of the Ridgedale church, an 85-member congregation listed as “Racially Diverse” in the latest edition of the directory “Churches of Christ in the United States.”
Willis has released a written statement to media, according to CNN.

“This is an in-church private issue. Because emotions are so inflamed at this point, I choose not to comment any further,” it read.
“The church is overseen by elders. I am a minister, not a pastor and therefore, do not have the authority to speak further on this. The news is getting mixed reviews.”

Chris Barnett, preaching minister for the East Brainerd Church of Christ in Chattanooga, recently preached a series on the relationship between husbands and wives — focusing one lesson on sexual sins.
The situation at the Ridgedale church demonstrates that “this is something we need to talk about and discuss,” he told the Chronicle.