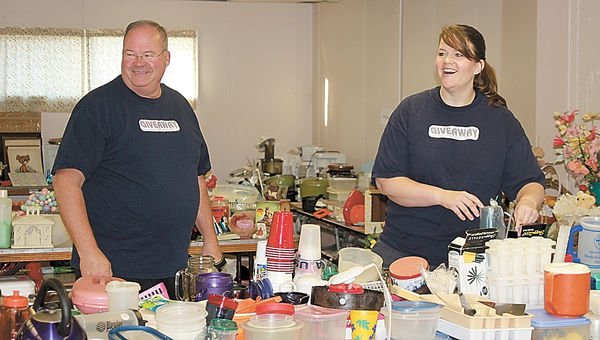 Church of Christ in Iowa opens its doors for annual ‘giveaway’

The Times-Republican in Marshalltown, Iowa, reports:

Long before the doors at the Church of Christ opened, a line began to form in anticipation of the “giveaway” on Saturday morning. The premise is simple —no price tags, no cash, checks or charge cards, no monetary donations, no questions or qualifying, just people helping people.
“It’s been a busy week collecting and organizing the donations,” said Amy Prescott, one of the organizers of the giveaway hosted by the church. “We’ve been blessed and want to share and serve.”
Items for the giveaway, which is in its ninth year, were donated by the congregation and other friends and supporters. A large clothing selection, of all manners and sizes, was available. The gymnasium had been converted to a clothing room for the day. All the clothing was neatly organized and sorted for display.

Read the full report.
See The Christian Chronicle’s May 2012 Churches That Work feature on the Marshalltown congregation.