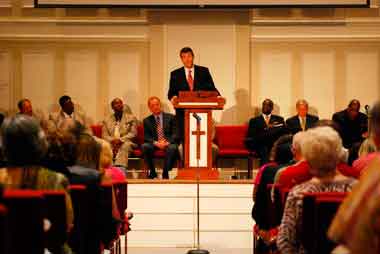 Tuscaloosa Mayor Walt Maddox speaks at the University Church of Christ in Tuscaloosa, Ala., at a prayer service marking the one-year anniversary of the April 27, 2011 tornadoes. (Photo by Chris Pow, via al.com)

Alabama residents joined church leaders and city officials for a prayer service at the University Church of Christ commemorating the one-year anniversary of the April 27, 2011 tornadoes that devastated the central part of the state, Al.com reports.
The service focused on the community of Alberta in Tuscaloosa. Participants included members of two Baptist churches and one independent congregation that lost their buildings in the storm.

Tuscaloosa Mayor Walt Maddox thanked the churches and their members for seizing the opportunity to continue worshiping and working in the community despite the destructive impact of the storm on their buildings.
“I absolutely want to thank our churches because you demonstrated something that I believe we all have known for way too long, and that is that church doesn’t take place between four walls,” Maddox said. “Church takes place in ministry directly to God’s people in need and I could never be prouder of our churches in this community. Their walls are gone down and they’re right there at the corner of their intersection providing humanitarian assistance.”

Read the full story.
Another building destroyed by the April 27, 2011 tornadoes was the meeting place of the Central Church of Christ in Tuscaloosa. Bobby Ross visited Alabama and wrote a story about the church’s rebuilding efforts.