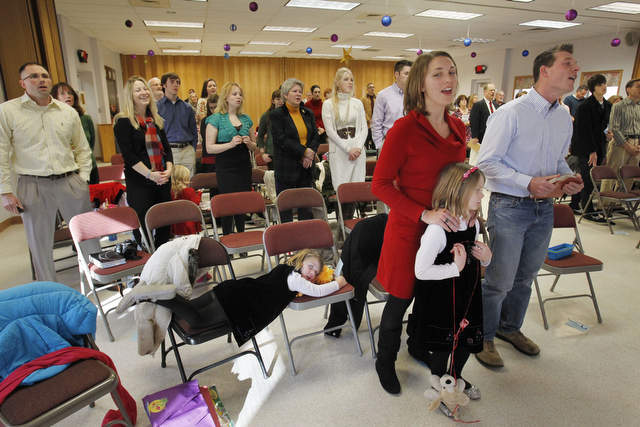 Carl and Alicia Williamson, right, sing during Sunday worship with the Gateway Church of Christ. (Photo by Jerry McCrea, Star-Ledger, via blog.nj.com)

Mark Di Ionno, columnist for the Newark Star-Ledger in New Jersey, praises the “unsung heroes” — churches and church-supported relief agencies — that are helping the people of the Northeast recover after Hurricane Sandy.
The columnist attended Sunday worship with the The Gateway Church of Christ in Holmdel, N.J., and writes about their efforts in Sandy relief. (See our roundup of churches in New York and New Jersey assisting in relief, including Gateway, and our list of churches and ministries collecting funds and coordinating relief efforts.)
Di Ionno writes:

HOLMDEL — The Gateway Church of Christ holds its services in the Holmdel Senior Center, giving truth to the old adage that a church is its people, not a building.
On Sunday, the people of Gateway were hosting a Christmas service for their Bayshore neighbors left homeless or displaced by Hurricane Sandy, and the young families of the church came early to set up the empty room.
Homemade cookies and other treats were carried in, coffee was started and wrapped.gif?Action=thumbnail&Width=460&algorithm=proportionalts for children were stacked in a corner. A visit from Santa would come later; now it was time to set up the altar (a plastic banquet table), the pulpit (a lectern on wheels) and the pews (about 100 cushioned folding chairs). But the storage closet was locked.
Carl Williamson wasn’t worried.
“We’ll figure it out,” said the 32-year-old pastor whose energy and ever-present smile has not waned since Sandy struck. “We’ve solved a lot of problems in the last seven weeks. We’ll solve this one.”
Within minutes, deacon Cliff Gray, with the confidence and deft of a professional burglar, matter-of-factly popped the lock with a coat hanger and the service furniture was rolled out.
This little parable is about faith and purpose defeating circumstance. God didn’t pop the lock. Cliff Gray did that. But his purpose came from God, and there is no better way to explain why religious organizations responded to Hurricane Sandy with such love and fervor and in such numbers. They are the unsung heroes of the storm.

Read the full story, and see an online gallery of photos from the Gateway church.