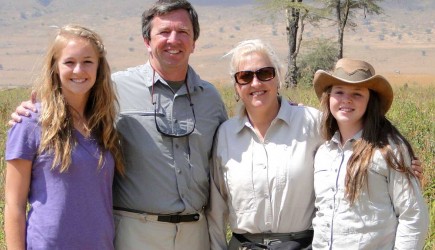 Staff Reports
As the Park Plaza church in Tulsa, Okla., deals with the tragic deaths of five members in a plane crash, members are pulling together and finding spiritual strength in their extended Christian family, church leaders say.
“The prayers of tens of thousands, literally, are holding us up right now,” Mitch Wilburn, minister of the 1,500-member congregation, told The Christian Chronicle.
To the Park Plaza church, the members killed Sept. 5 when a small plane crashed about 30 seconds after takeoff were family, friends and missions enthusiasts.
Steve Lester, an anesthesiologist and deacon at Park Plaza, was flying his wife, two teenage daughters and fellow doctor Ken Veteto to the University of Oklahoma’s season-opening football game near Dallas.
Authorities from the Federal Aviation Administration said the plane hit — then became tangled in — a guy-wire from a 600-foot radio tower. The plane dismantled and fell into a nearby baseball field. The Oklahoma Highway Patrol’s report said heavy fog was a contributing factor.
Killed were Lester, 48; his wife Dana, 48; their daughters Laura, 16 and Christina, 13; and Veteto, 50. All were from Tulsa.
“These were people who led extraordinary lives, lives of service, and they had a huge impact on our church and on their community, as was evident at their memorial services,” Wilburn said.
Steve Lester earned his private pilot’s license in 1987 and combined his love of flying with his desire to serve others, frequently taking his family on mission trips and conducting pain management seminars in under-served areas.
Most recently, Steve and Dana Lester took Laura and Christina to Africa to work at one of Park Plaza’s mission points, Wilburn said.
Veteto, also a deacon at the church, organized the annual Christmas party at Park Plaza. He practiced internal medicine and decorated his office with Oklahoma Sooners and Dallas Cowboys memorabilia. He served in local missions, working with a mobile clinic called Good Samaritan.
“He was a very funny guy who wasn’t afraid to make fun of himself,” Joe Reese, Veteto’s medical practice partner and fellow Park Plaza member, told The Tulsa World. “He would poke fun at others, as well, but always in a good-natured way.”
Patient Julie Smith said Veteto — a 1981 graduate of Oklahoma Christian University — was her family’s doctor for 19 years. “I’ve been in his Dr Pepper room, his golf room and his (unfortunately) OU room — he knew we were OSU grads,” she said. “He saw me through a lot different ailments. He was a very good doctor, counselor and friend. We will miss him very much.”
Wilburn remembered Dana Lester, a former neonatal intensive care nurse, as a hard worker and encourager. The two were part of a church-based group of 40 that served at an orphanage in Honduras, he said.
Laura and Christina, students at Metro Christian Academy, were remembered at a special service when classes resumed after Monday’s holiday. Additionally, 500 or so from the school attended the family’s memorial service at Park Plaza.
“Here were people with extremely busy schedules making time to be about missions,” Wilburn said. “It absolutely refutes any excuses you might have about not being involved yourself. They ‘spurred many people on to good deeds,’ as Scripture puts it.”
Surviving members of the Lester family are Sarah Lester, an alumnus of Oklahoma Christian University now attending OU; and son Matthew Lester, who serves in the Coast Guard. A fund has been established in the family’s name at Regent Bank, 7136 S. Yale, Ste 100, Tulsa, OK 74136.
Veteto is survived by his wife, Carrie; a son, Cody, who is a senior at Abilene Christian University in Abilene, Texas; and a daughter, Carissa, who is a high school senior in Tulsa. The Veteto family has requested that memorials be made to the Mansur, Mahaffey, Owsley Scholarship Fund at Oklahoma Christian University.