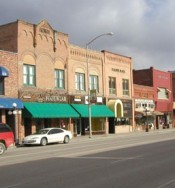 Kellyn Brown
A petition circulated and backed by local Church of Christ members to stop an upcoming gay pride parade was submitted to Kalispell, Mont., City Council and dominated the public comment period at its most recent meeting.
Opponents of the Montana Pride Celebration called it “immoral,” while supporters urged councilors to support equal rights and embrace diversity.
Mayor Pam Kennedy pointed out that the council could not discuss the parade because it wasn’t on the agenda. Both she and Interim City Manager Myrt Webb did confirm that organizers had received a permit for the parade and met all the city’s contractual obligations.
Barry Brubaker presented the petition to the council and said that allowing the parade to proceed would “further erode morality and set precedence for future lasciviousness and lewd displays that other communities have experienced.” He said, as of May 18, about 200 people had signed the petition.
He and four others spoke in opposition to the march. About a dozen people told the council that they supported it.
Neal Brown, who is on the board of directors of the Montana HumanRights Network and lives in Bigfork, said “we don’t discriminate byrace, or creed, or religion, or sex or sexual orientation. So I askthat this council not only allow this celebration to go forward, but toembrace it.”
Other community members echoed that sentiment and vowed that the paradewould not be vulgar. “We’re not going out to make a scene like in SanFrancisco,” Dee Boyce said. “…We want to show some pride that we’refrom Montana and that it’s a welcoming state.”
Some speakers referenced religion in stating their positions. Rev.David Beaulieu of Valley Victory Church said he was concerned about“the agenda – the agenda that might silence voices that might want tostand up for Christ or stand up for what the Bible says about moralbehavior.” Kathy Kelly, who represented the Flathead Valley Church ofChrist, said, “We believe we are all made in the image of God –everyone of us.”
The Montana Pride Celebration is in its fifth year, and was previouslyheld twice in Billings and twice in Helena with little disruption.Kalispell was chosen for 2009 and the event on June 19-20 includes aparade, a fair with booths at Depot Park and two dances at Red LionInn. All the events are open to gay and straight people.
Local law enforcement reportedly expects protests at the event and willhave extra patrol during the two days. An anonymous e-mail circulatedto local media last month warned that people may try to disrupt theparade. But following an investigation, police couldn’t confirm thereport and there have been no threats since.
Some of the 175 members of the Kalispell Church of Christ also have been active in circulating and signing the petition. The community has three congregations.
(Story used with permission.)