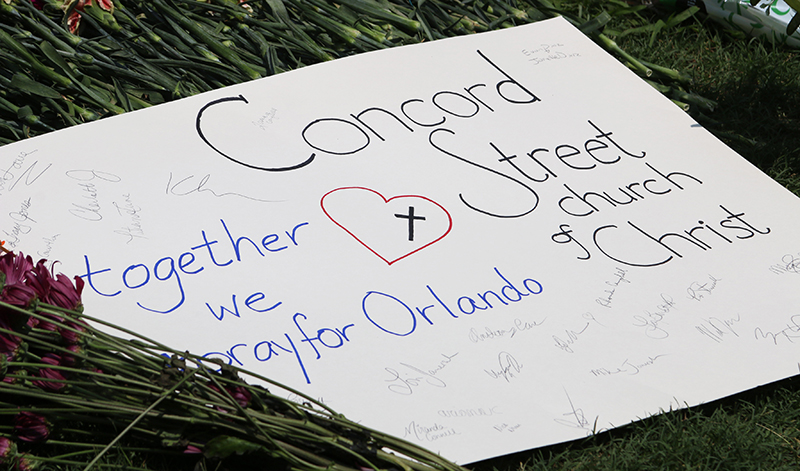 After Sunday’s terrorist attack on a gay nightclub claimed the lives of 49 souls, a dozen members of three Orlando, Fla.-area Churches of Christ brought flowers — and prayers — to a memorial site for the victims.

“Together we #prayforOrlando,” said a poster signed by members of one of those congregations, the Concord Street Church of Christ.

Gunman Omar Mateen, who pledged allegiance to the Islamic State, targeted not just the LGBT community but all of Orlando, said Meghan Hone, who coordinates the Concord Street church’s Sonshine Street children’s ministry.

“It doesn’t matter if this terrorist shot up a nightclub or a Walmart or a gas station,” said Hone, a mother of three. “He could have walked into anywhere. This was an act of terrorism right here in my city.” 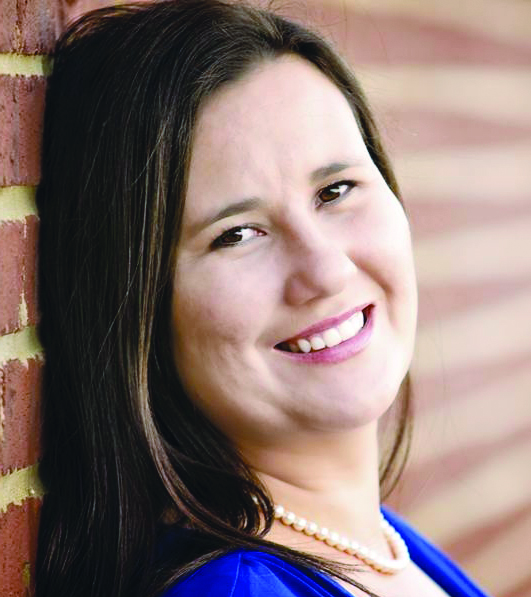 Meghan HoneHone, a professional opera singer, said she wanted to show love for the gay community and grieving loved ones.

“Because of my work in local performing arts, I have a lot of friends in the gay community,” she said. “I’m sure some believe that Christians don’t care about them, and we do care about them. A lot of people in the world and sometimes even other Christians have a hard time understanding that you can love and deeply care about someone even if you don’t endorse what they believe in.”

Cheryl Wheeler, whose husband, Nathan, preaches for the Pine Castle Church of Christ in Orlando, agreed.

“The world, everybody’s focusing on the homosexual side of things,” said Wheeler, also a mother of three. “But if you think of Jesus and his words in Luke 13, when people died in tragedies, they weren’t worse sinners than anyone else. We all need to repent. We’re all in need of a Savior, and we just ask the Father for renewing and restoration and just hope everybody can fix their eyes on Jesus.”

On Monday afternoon — after the deadliest mass shooting in U.S. history — Hone, Wheeler and other Christians held hands, prayed and sang on the lawn outside the Dr. Phillips Center for the Performing Arts. That is the venue where mourners are lighting candles and bringing tributes such as stuffed animals, handwritten notes and balloons.

“Being a mother, knowing that a lot of mothers received phone calls about their children that day, it’s just very tragic, very sad,” Wheeler said. 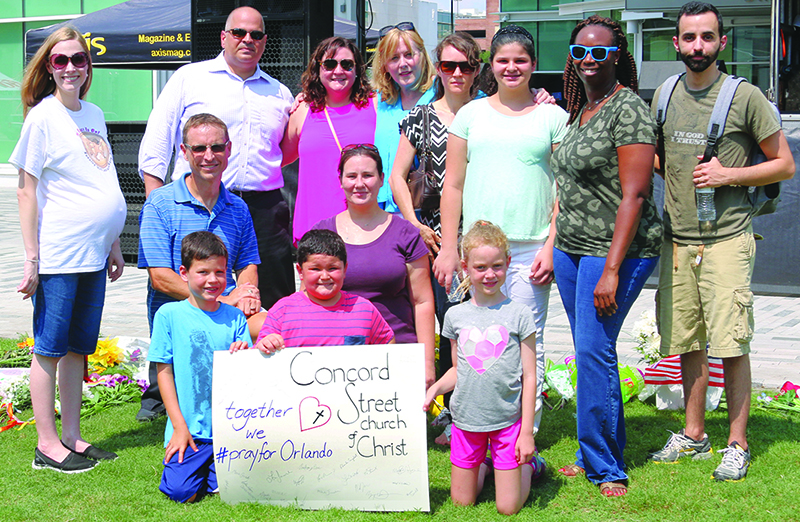 Christians bring flowers ­— and prayers — to a memorial for the victims of a terrorist attack on a gay nightclub in Orlando, Fla., that left 49 dead and more than 50 wounded. (PHOTO PROVIDED BY JANETTE DIAZ)

The church members sang hymns such as “How Deep the Father’s Love for Us,” “It Is Well With My Soul” and “A Common Love” before ending with “God Bless America.”

“It was a sad experience but exhilarating,” said Janette Diaz, a member of the South Seminole Church of Christ in Winter Park, Fla., north of Orlando. “Our singing and praying weren’t rehearsed but from the heart.

“I wanted to be there to show the community that the church loves and that Christians care,” Diaz added. “We thought that it was a good outreach idea because in times of disaster, people often look to God.” Related editorial: A difficult, heartfelt prayer for Orlando For Hone, news of the tragedy came as she prepared for the Sunday morning assembly of the Concord Street church — just a few miles from the shooting scene.

At first, Hone heard that 20 people had been shot. News helicopters circled overhead as she drove to worship. As she checked updates, the death toll and injury count of more than 50 kept rising.

“It really struck me,” she said. 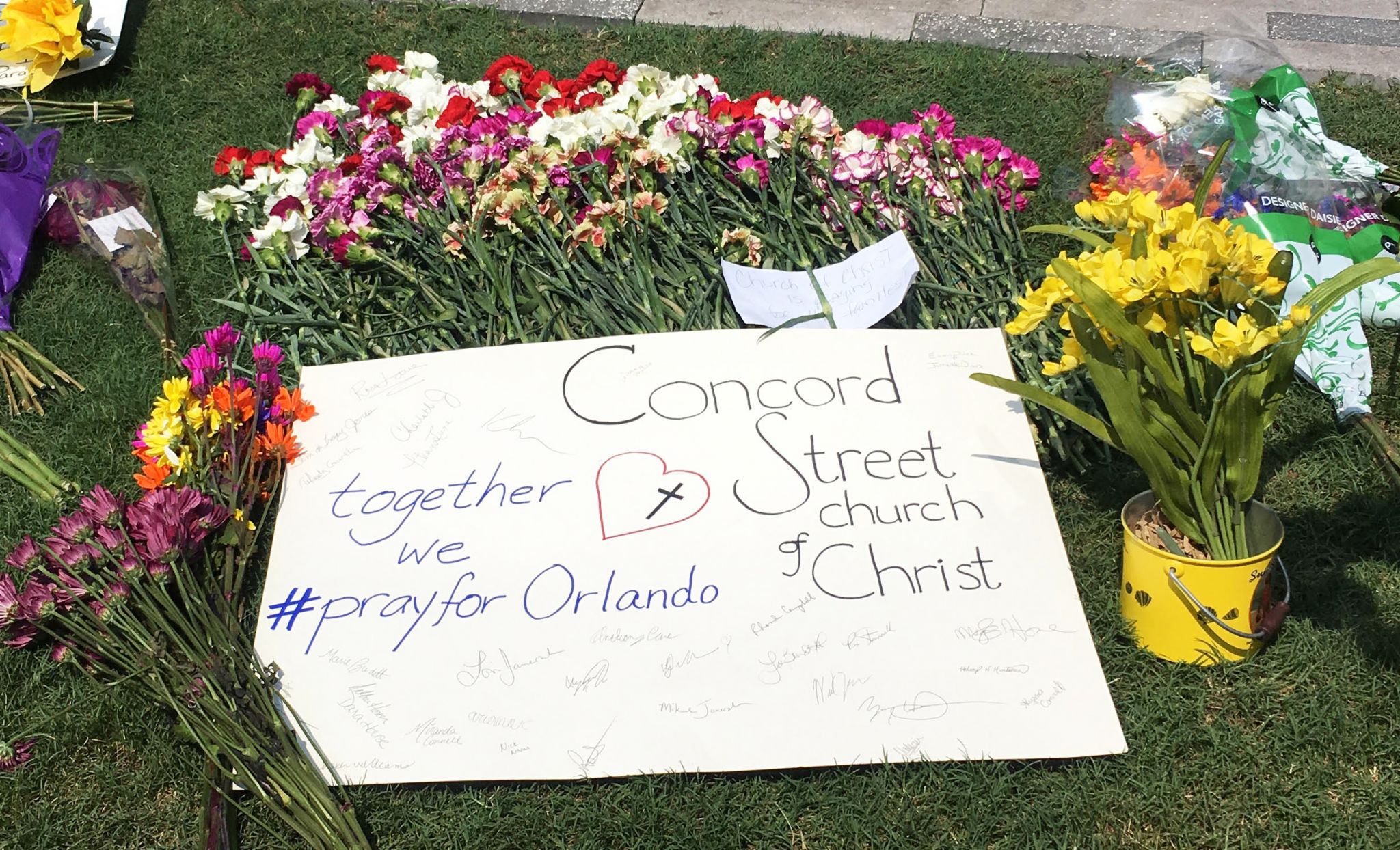 The flowers and poster left at the memorial site by members of Churches of Christ. (PHOTO PROVIDED BY CHARLOTTE JeBAILEY)

“Before VBS, we had a moment of silence and said a prayer for the victims,” House said.

Meanwhile, Orlando residents lined up to give blood for the victims and first responders, and Hone began organizing a special blood drive by the church. When she learned people were waiting for hours in triple-digit heat to give blood at a nearby center, she decided she and a few could others could break away from VBS.

They borrowed crates of water from the church’s homeless ministry and headed to the donation center to distribute the free bottles. Other people were already there, handing out fruit and Chick-fil-A sandwiches.

“I was very touched by just this outpouring of service and all that,” Hone said. “To me, that’s what we should be doing as a church. We need to serve the community.”