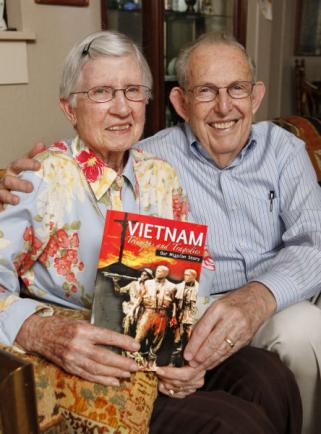 The Oklahoman reports on the life and mission work of Ralph and Gladys Burcham, members of the Memorial Road Church of Christ in Oklahoma City. The couple served as missionaries in Saigon during the Vietnam War.

Gladys and Ralph Burcham worked as teachers and missionaries during the Vietnam War. The Edmond, Okla., couple has written a book about their experience titled “Vietnam: Triumphs and Tragedies.” (Photo by Paul B. Southerland, via newsok.com)

“We could hear the mortars whizzing over and the explosions at the other end,” Burcham said. “They just rocked Saigon. It sounded like the end of time.”

Burcham, his wife, their two children and six guests were hunkered down in a home four blocks away from Tan Son Nhat Air Base in Vietnam.
The Burcham family spent nearly two years working as teachers and missionaries in Vietnam. The Tet Offensive forced them to leave.
They didn’t expect such an abrupt end to their work in Vietnam, Ralph Burcham said. They also didn’t expect to bring nearly 300 Vietnamese refugees with them back to Oklahoma.

Read the full story.
The couple’s book, “Vietnam: Triumphs and Tragedies” is available on Amazon.com.