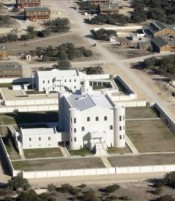 Joy McMillon
Everybody knows that Texas is a big place. But in Eldorado, a tiny ranching town with a population of 1,800, the church also has a huge heart.
Along with others from their hometown, Christians here were caught up in a three-day saga when swarms of law officials and reporters descended on this one-stop-light West Texas town over the weekend in response to claims of physical and sexual abuse.
Texas child welfare authorities removed 220 children and women from the compound of the Fundamentalist Church of Jesus Christ of Latter Day Saints, as part of an investigation into the polygamous sect and an accusation by a 16-year-old girl that she had a child by a 50-year-old sect member. It is illegal in Texas for anyone under 16 to marry, even with parental consent.
The event thrust Eldorado into the national news scene, as dozens of media outlets descended on the town. But local residents turned the negative attention into a positive testimonial, coming to the aid of frightened people who needed help.
Members of the Mertzon Highway church were quick to help care for the women and children, many of whom had never left the sect’s 1,700-acre Yearn for Zion Ranch northeast of Eldorado.
“We live in a kind of town where everybody wants everybody else’s kids to do well,” said William Edmiston, a church elder and veterinarian,  “We all know each other, and we try hard to help everybody — especially where there are kids are involved,” said the owner of the Eldorado Animal Clinic.
Along with other churches, schools and local residents, church members pulled together to meet the physical needs of this group—most of whom they had never met or seen.
Thursday night, evacuees were placed on cots in the fellowship hall of the First Baptist Church — only two blocks from the Church of Christ — and in a community center at the edge of town.
“The Baptist Church was doing a great job, but they were up to their eyeballs and needed some help,” said Edmiston, who visited both locations on Saturday morning.
Mertzon Highway members furnished Saturday’s evening meal for the women and children at both locations as well as dinner for 50 law enforcement officers.   They also provided personal items such as diapers, baby wipes, disinfectant and hair spray, following a request for these items from officials at the Child Protective Agency, Edmiston said.
On Sunday they did laundry for the women and children.
“We filled every washer and dryer in the Eldorado Laundromat,” he said. His wife, Darlene, took the remainder of the clothes home. She found several people at home on their street willing to help.  She also entered one church member’s house and started the washing machine while the woman was in the shower, laughed Edmiston.
“Eldorado is the kind of town where you don’t lock your doors,” the life-long resident explained.
Baptist church officials warned him that many of the women and children had become sick after being fed spaghetti on Friday.
“They … weren’t used to eating rich sauces, processed food or carbohydrates,” he said.   “They needed fresh vegetables and fruit as well as meat.”
Saturday afternoon nearly 30 Mertzon Highway church members — about half the number of members — grilled chicken, tossed salad, steamed broccoli and prepared desserts, as requested.   Baptist officials told them their guests “really enjoyed the food,” said Edmiston.
On Sunday, Texas child welfare authorities bused the women and children to Fort Concho, a National Historic Landmark in San Angelo, where they could be housed in one place and other services would be more accessible, Marleigh Meisner, a spokeswoman for Child Protective Services, told the Dallas Morning News.  She said that the group was still being questioned to determine how many would enter temporary state custody and how many could return to the compound. The 16-year-old girl whose phone calls led to the raid has not yet been identified.
Meanwhile, Eldorado’s 60 or so church members, local residents and more than 100 people from the town’s various congregations cleaned up the community center on Sunday where 150 women and children had stayed.
Church members couldn’t help but reflect on this whirlwind weekend.
“Any time you have a congregation doing something together,” said Edmiston, “it’s good.”