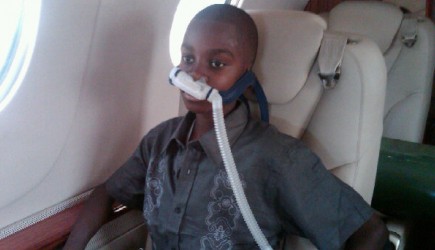 Erik Tryggestad
David Senatus survived the Jan. 12 Haiti earthquake with only a minor gash on his head.
Nonetheless, the disaster that killed more than 200,000 people almost cost the 15-year-old his life.
Senatus is one of about 725 Haitians sponsored by Hope for Haiti’s Children, a Texas-based, church-supported ministry that helps pay for the children’s education. A few months before the quake, a medical mission team from the U.S. visited some of the children and found that Senatus had a severe heart condition.
Debbie Vanderbeek, Haiti program director for Hope for Haiti’s Children, contacted Dr. David Smith about the boy’s condition. Smith, a church member who oversees another ministry — the Haiti Christian Development Project in Little Rock, Ark., — contacted the chief of cardiology at Arkansas Children’s Hospital.
“On the day of the earthquake, we were about ready to finalize plans to bring David to the U.S. for surgery,” Smith said.
In the weeks that followed, the paperwork hit a snag, he said, after another religious group was arrested and charged with kidnapping for attempting to take 33 Haitian children to an orphanage in the neighboring Dominican Republic.
When Smith led a medical mission trip to Haiti after the quake, Senatus’ condition had worsened. His heart was failing, and he was having trouble breathing.
Workers with Hope for Haiti’s Children labored around the clock to get the necessary documents for Senatus to travel to Arkansas. A series of coincidences — which Vanderbeek considers to be God’s providence — led her to an organization called Corporate Aviation Responding in Emergencies, or CARE.
The group volunteered to airlift Senatus to America.
“God put it all together,” Vanderbeek said.
When Vanderbeek brought Senatus and his father to the airport, reporters from NBC were waiting. Dr. Nancy Snyderman, the network’s chief medical editor, carried Senatus to the plane when he became too short of breath to walk.
Dr. Robert Jaquiss performed heart valve replacement surgery at Arkansas Children’s Hospital.
“An adult who had his cardiac condition I think would certainly be dead by now,” Jaquiss told NBC. “One of the magical things about children, though, is that they can overcome things.”
As Senatus recovered, he was cared for by nurse Deann Martin, a member of the Downtown Church of Christ in Searcy, Ark. During his convalescence, the boy and his father stayed in the home of Tony and Robin Hill, members of the Sylvan Hills Church of Christ in Sherwood, Ark.
Senatus and his father have returned to their home in Haiti. Snyderman featured their story recently on NBC’s  “Today” show.
See the video report at christianchronicle.org/blog . For more information, see hopeforhaitischildren.org .