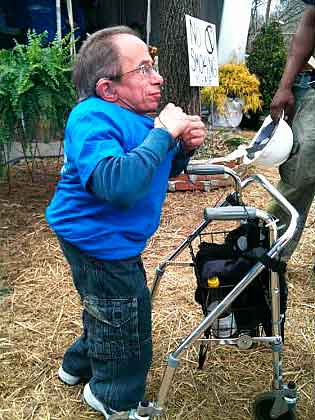 Church member to be featured on ‘Extreme Makeover Home Edition’

Don Gardner Jr., a member of the Mayfair Church of Christ in Huntsville, Ala., is slated to appear on an episode of “Extreme Makeover Home Edition” this spring.

The crew of the popular ABC reality show visited Chattanooga, Tenn., recently to construct a home for Patrick Sharrock and his family. Patrick has Osteogenesis Imperfecta, or OI, commonly known as brittle bone disease.
Don, who also has OI, met Patrick five years ago at a conference for people with the genetic bone disorder. The two have been close friends ever since.
The producers of “Extreme Makeover” invited Don to tour the home as they completed it, WTVC in Chattanooga reports:

Since Gardner and Patrick have the same disorder, the ‘Extreme Makeover’ crew asked Gardner to come into the house to help make sure it will be safe for Patrick, whose body is very fragile.
“The situation with people with OI is sometimes they can have a simple sneeze and break a rib,” he says.
But Gardner says the danger doesn’t stop Patrick from living large, and knows the Sharrocks will love their new home.

See the full story and video interview with Don.
“Don is a really great guy and often hands out church bulletins as a door greeter,” said Jana Miller, a member of the Mayfair church.