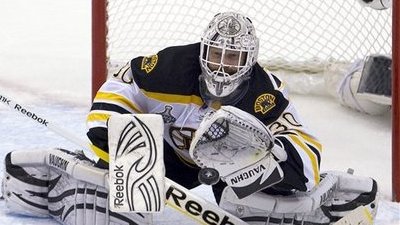 The Boston Bruins won the Stanley Cup on Wednesday night, and goalie Tim Thomas — a member of the Burlington Church of Christ in Massachusetts — was recognized as the most valuable player during the playoffs.
NESN.com reports:

Tim Thomas stood on his head for the Bruins the entire season, and that success carried over into the playoffs. Following Game 7 on Wednesday night, Thomas was named the winner of the NHL’s Conn Smythe Trophy, the award given to the player determined to be most valuable to his team during the Stanley Cup Playoffs.
Thomas is the first goaltender to win the award since Carolina Hurricanes goalie Cam Ward earned the honor in 2006. He is the first American to win the Conn Smythe since former-Bruin Brian Leetch did so as a member of the New York Rangers in 1994, and the first Bruin to win the award since Bobby Orr in 1972.

Obviously, much more important than his athletic prowess is the fact that Tim loves the Lord and the church and is devoted to his family.